Uniform Crime Reports: 2008 Crime in the U.S. Shows Residential Burglaries Are up 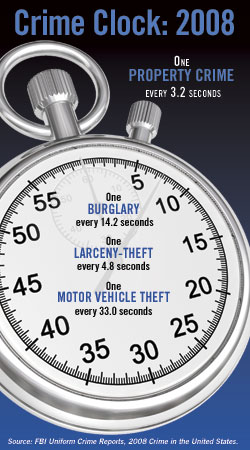 The latest edition of the FBI’s Uniform Crime Reports, 2008 Crime in the United States, published last month, offered the latest snapshot of the crime level in the U.S. While the numbers for violent crimes made some modest declines, the statistics on burglary illustrated more of a roller coaster effect.
The national rate for burglary in 2008 was 730.8 per 100,000 inhabitants. Total burglaries were 2, 222,196, up 2 percent from 2007 and up 3.6 percent over the five-year span dating back to 2004. The news was especially discouraging if you’re a homeowner, landlord or renter. Residences took a significant hit in 2008, burgled 1,562,976 times, up 5.4 percent from 2007 levels and accounted for 70.3 percent of all burglary offenses. 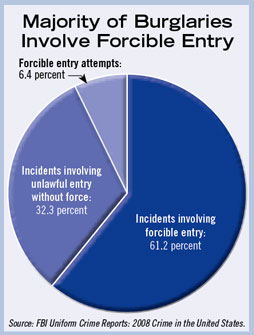 “People aren’t home during the day,” said James Alan Fox, Lipman professor of criminal justice at Northeastern University, Boston, explaining the higher number of burglaries during the daylight hours. “You have single parents or two-career households; mom and dad are at work, the kids are at school, and nobody’s home.

“During the day, it may be easier to see, but it’s also easier for the burglar to identify a target. No car in the driveway; ring the doorbell and no one answers. They may even have a phone number and try to call,” Fox added. “If they get the answering machine that says no one’s available, their first thought isn’t going to be that someone might just be in the bathroom.”
Fox also suggested that people might not to set the alarm during the day. He said many are more likely to activate an alarm at night to prevent burglary or an attack, but in the daytime they may be too rushed or too indifferent to activate it. 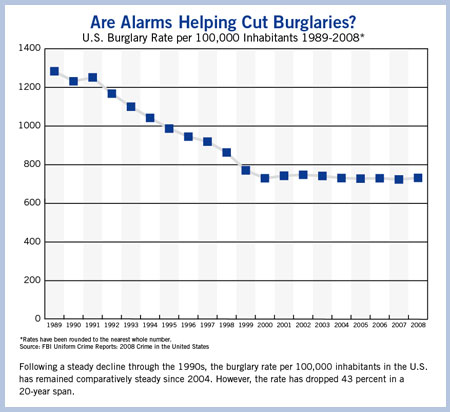 Fox also suggested that people might not to set the alarm during the day. He said many are more likely to activate an alarm at night to prevent burglary or an attack, but in the daytime they may be too rushed or too indifferent to activate it.

“We know that homes that are protected (by a security system) are much less likely to be broken into than a home that doesn’t have any visible sign of a security-type system,” said Jon Sargent, past president of the California Alarm Association and ADT Western industry relations. “I think homes with other forms of protection, even something as simple as a dog or some indication that they have some type of camera system, they’re less likely [to be targeted].”

“Security measures in a commercial establishment may seem better than what people have in their homes, as perceived by the burglar,” Fox said. “It may be that the commercial establishment has better resources, or may put greater resources into it â€” whether it be a guard service or an alarm system â€” than a private residence does.” Fox added that, as the economy has struggled, residents may have chosen to cut back on their alarm systems.

The advancements in technology â€” and perhaps of more significance, the lowering of their cost â€” are at play in the decline of nonresidential burglaries, Sargent said. The affordability and ease of use of electronic protection systems has encouraged many users to add security systems to protect their properties.

“The proliferation and the advancement of camera systems, both with monitoring capabilities and others that are simply recording, could be playing a factor in that,” Sargent said. “People understand that there are more cameras everywhere these days.”

Golf, Food and Fun All Part of AIREF Golf Outing

Tri-Ed and Northern Video Systems Consolidate with a Purpose

Kevin Campbell is an Associate Editor for SDM Magazine
You must login or register in order to post a comment.