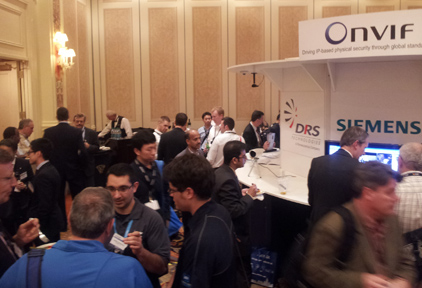 ONVIF hosted its fitfth interoperability Demonstration on Thursday, March 29, during ISC West in Las Vegas. Attendees had an opportunity to network, see the newest of ONVIF’s 1,600 conformant network video products at work, and hear about the organization’s plans to future-proof the security industry.

After releasing its core specification and network video specification, ONVIF announced in 2010 that it would extend its scope to include physical access control. The organization’s first physical access control specification (PACS) and dedicated testing tools are nearly ready and may be released in late 2012, Jonas Andersson, Chairman of ONVIF’s Steering Committee, told SDM,. While the specification could have been launched earlier, Andersson said, part of ONVIF’s mission is to take a holistic approach that includes guidance through the conformance process as well as testing tools to ensure interoperability.

A first phase service specification for access control systems will focus on monitoring and control. The next steps will address credential management, basic configuration, basic installation, and complete credential/access management.

During a presentation to attendees, Andersson explained the new concept of profiles that ONVIF announced late last year. Its first such profile, Profile S, was released earlier this year and describes common functionalities shared by conformant video management systems and devices, such as IP cameras or encoders, that send, configure, request or control the streaming of media data over an IP network. Profile S is the first in a series of profiles designed to help end users and systems designers more easily select interoperable devices.

The introduction of profiles is designed to enable end users to more easily identify features supported by a profile without determining the compatibility between versions of the ONVIF specification. For example, users will no longer need to know whether specific devices in ONVIF 2.0 are compatible with clients that conform to ONVIF 1.0, or with newer versions of the specification introduced in the future. Instead, users and systems designers will be able to select the appropriate profile that offers interoperability at a specific functional level between units and software that fits their needs, ONVIF stated.

Andersson also noted ONVIF is in the process of developing online training and webinars to provide an overview ONVIF’s standardization work and a deeper understanding in developing and specifying systems with the ONVIF interface.