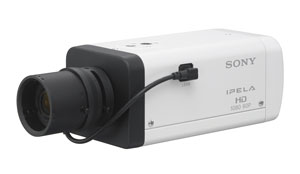 Sony Electronics unveiled its EX series IP cameras, the first based on the IPELA ENGINE platform and part of Sony’s V Series. The six new IPELA ENGINE EX cameras were designed to deliver advances in dynamic range, frame capture speed and low-light performance for demanding imaging applications in the mid-to-high level of the video surveillance marketplace. The series includes the fixed‐angle SNC‐VB600 and SNC‐VB630 (pictured) box cameras; the SNC‐VM600 and SNC‐VM630 mini dome cameras, and the SNC‐VM601 and SNC‐VM631 vandal-proof indoor mini domes. With the newly improved View‐DR dynamic range enhancing technology, each IPELA ENGINE EX series model provides astounding detail even when imaging brightly backlit figures, according to the company. Noise reduction is enhanced and low-light sensitivity is improved to more than twice that of Sony’s previous cameras.