This website requires certain cookies to work and uses other cookies to help you have the best experience. By visiting this website, certain cookies have already been set, which you may delete and block. By closing this message or continuing to use our site, you agree to the use of cookies. Visit our updated privacy and cookie policy to learn more.
Home » Thread, by Google’s Nest and 6 Other Companies, Offers a New Home Networking Protocol
Home Automation / EntertainmentSmart Home

Thread, by Google’s Nest and 6 Other Companies, Offers a New Home Networking Protocol 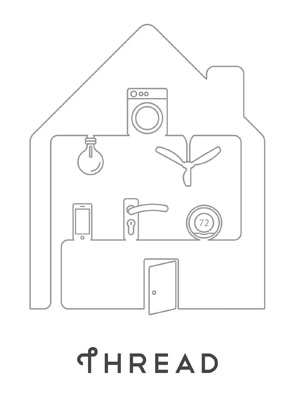 Analysts at Gartner Inc. have predicted that “smart home” products will add $1.9 trillion to the global economy in the next six years. While that number may seem high in a market of fragmented product lines that don’t always “play nice,” it looked a lot more realistic with the announcement by Google’s Nest, and six other companies (Yale Security, Silicon Labs, Samsung Electronics, Freescale® Semiconductor, Big Ass Fans and ARM) that the companies have formed the Thread Group (www.threadgroup.org) to develop Thread, a new IP-based wireless networking protocol. The charter of the Thread Group is to guide the adoption of the Thread protocol, which will offer manufacturers and consumers “the very best way to connect and control products around the home.”

While currently available 802.15.4 networking technologies have their own advantages, each also has critical issues that prevent the promise of the Internet of Things (IoT) from being realized, according to the Tread Group These include lack of interoperability, inability to carry IPv6 communications, high power requirements that drain batteries quickly, and “hub-and-spoke” models dependent on one device (if that device fails, the whole network goes down). With Thread, product developers and consumers can easily and securely connect more than 250 devices into a low-power, wireless mesh network that also includes direct Internet and cloud access for every device, according to the announcement by the Thread Group.

“Existing wireless networking approaches were introduced long before the Internet of Things gained ground,” said Vint Cerf, vice president and chief Internet evangelist, Google, and advisor to the Thread Group. “The Thread protocol takes existing technologies and combines the best parts of each to provide a better way to connect products in the home.”

Unlike many existing technologies or IoT approaches, Thread is not an application protocol or a connectivity platform for many types of disparate networks. Thread is an IPv6 networking protocol built on open standards, designed for low-power 802.15.4 mesh networks. Existing popular application protocols and IoT platforms can run over Thread networks. A version of Thread is already being used successfully in Nest products today.

Reliable networks: Thread offers self-healing mesh networks that scale to hundreds of devices with no single point of failure. Devices are ready when people need them.

Simple connectivity: Thread devices are simple to install with a smartphone, tablet or computer. Consumers can securely connect Thread devices in the home to each other and to the cloud for easy control and access from anywhere.

Low power: Thread supports battery-operated devices as part of a home network. This allows the devices that people use every day — including thermostats, lighting controls, safety and security products — to be a part of the network without requiring constant charging or frequent battery changes.

Millions of existing 802.15.4 wireless devices (the Nest Protect for example) already on the market can run Thread with just a software enhancement — no new hardware required. Thread is designed for quick implementation and deployment of devices throughout the home.

Thread products will also bear the Thread logo, indicating they have been certified for quality, security and interoperability — and to help consumers identify them on the market.

Nest Snapped up By Google

Respondents expect their companies revenue growth in 2008 will result from sales or installations to the high-end home market, followed by the mid-market and custom-built new construction.