Security as Playmaker at the World Cup

The 2018 World Cup required the involvement of a significant number of service providers and installers, complex integrations, and years of planning to provide physical security to the stadiums. Here’s a peek at a slice of that work.

The World Cup is one of the biggest international sporting events. Almost half of the world’s population tuned in to watch the month-long 2010 World Cup in South Africa, according to FIFA (Fédération Internationale de Football Association). Russia, the host country for the 2018 men’s World Cup, spent billions of dollars in preparation for the occasion. The country reportedly devoted between $11 billion and $14 billion to World Cup expenses, including approximately $3 billion to stadium builds and updates. The hefty bill is on par with other host countries, none of which have spent less than $10 billion in the last decade or so.

With around one million people reportedly coming and going from Russia during the 21st World Cup, the physical security and safety of participants, employees and spectators was an enormous undertaking — and a similarly enormous success as no major incidents were reported. A country hosting such a large event is intently watched by the international community, and negative events or coverage risk damaging a country’s reputation.

FIFA, the organization overseeing the event, says that host countries assume the immense responsibility of ensuring the safety and security at all sites and venues, as well as host city airports and transportation stations.

“FIFA places the highest importance on the safety and security of all persons involved in and attending its competitions and events. Russia was excellent in terms of security and we received very positive feedback from all stakeholders,” a FIFA spokesperson tells SDM about the 2018 World Cup event.

And, it would seem, no news in terms of major security events, is good news to those in the industry. Though the soccer tournament, which takes place every four years, is over and done with within a matter of weeks, the event requires years of planning, infrastructure and investments by its host country. According to FIFA, that planning process begins as soon as the host is announced.

For the 2018 World Cup in Russia, planning began on December 2, 2010, as government and design, engineering, construction and IT companies worked in 11 cities across Russia to prepare for the influx of visitors. Security at the stadiums before and during the 64 matches played at the World Cup must adhere to requirements and regulations set out by FIFA. For physical security, this includes a mix of human and electronic security and surveillance, both outside on the perimeter and surrounding areas, and inside the stadiums. FIFA’s regulations call for a video surveillance system that must allow personnel to identify incidents or potential problems, assist with the situational assessment and inform courses of action and responses, as well as make recordings that can be used for investigations and evidence.

During the World Cup preparations, the Ministry of Sport of the Russian Federation, Sportin (the agency responsible for stadium builds), and the Federal State Unitary Enterprise, worked with many different contractors, integrators and vendors to accomplish the goal of safety and security and meet the regulations set by FIFA for the 12 World Cup stadiums.

A Look at a Portion of Stadium Security

The following security systems were deployed at these 2018 World Cup stadiums. 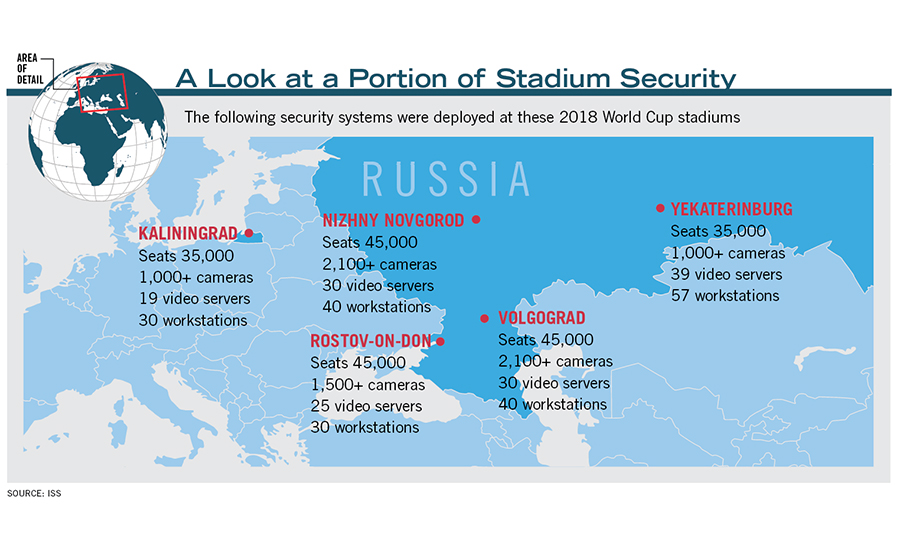 One of those vendors was ISS – Intelligent Security Systems, a developer of security surveillance and control systems for networked digital video and audio recording, video image pattern processing and digital data transmission. Headquartered in Woodbridge, N.J., ISS has a global base of developers and primarily focuses on the transportation, smart cities and critical infrastructure markets. The company has had its share of large installations, third-party integrations and large-scale systems customization, including for the 2016 Rio Olympics.

ISS deployed the complex video surveillance systems for five of the 12 Russian stadiums, including Rostov-on-Don, Kaliningrad, Volgograd, Nizhny Novgorod and Yekaterinburg. Those five stadiums included integration with about 8,000 cameras and well over 100 servers, from a variety of manufacturers.

The solution needed to be an independent video management system handled and managed at each stadium location, as well as be completely integrated with each stadium city’s existing urban surveillance systems for seamless law enforcement viewing — all of which were FIFA requirements. The main goal of the surveillance systems was to allow staff the ability to have total situational awareness of each sports complex in its entirety, including perimeter; entrances and exits; parking (both outside and underground); internal territories such as player locker rooms and public gathering spaces; areas of small architectural forms; and more. External cameras for the perimeter and outdoor areas had to be equipped to withstand Russia’s harsh weather conditions with waterproof and dustproof functions, along with a solution that prevented data loss in the event of network instability.

ISS became involved after going through the complex certification process within both Sportin, and all the general contractors, which for the five stadiums included the Crocus Group, Sinara Group and Stroytransgaz.

Because ISS was already a provider of its SecurOS VMS platform and native analytics for the five Russian city’s safe-city urban surveillance systems, it made sense to deploy the same platform in the stadiums for its integration capabilities and scalability, according to Peter Pirogov, director of product management, Intelligent Security Systems.

According to Olga Markevish, head of the system integration department at Vilkom Holding, Russia, one of the integrators for the Nizhny Novgorod stadium, “One of the major challenges was the necessity to coordinate and approve various project stages with many different entities.... Moreover, we ensured interoperability of the stadium venue and the city video surveillance systems. Thus, [government and city operators] had the opportunity to receive video streams and video events of the situations at the stadium instantly.”

Pirogov says that while every surveillance system was integrated to pass live and archived video streams to the local offices of the federal agencies and the Federal Monitoring and Control Center, each system was also designed and deployed as a virtually independent system. At the 45,000-seat, five-level Rostov-on-Don stadium, for example, 25 SecurOS IVS video servers integrated with more than 1,500 IDIS IP cameras to transmit video to 30 SecurOS Universal workstations. In Kaliningrad, which seats 35,000 on five levels, 19 SecurOS IVS video servers under the SecurOS VMS needed to process data from more than 1,000 IDIS IP cameras at its 30 workstations within the stadium.

Aside from the necessity for independent surveillance systems at each stadium to be available to both on-site security staff as well as with law enforcement and government officials remotely, FIFA and Sportin had other security needs.

Most of the hardware and software had already been integrated and tested with the video management platform before deployment, according to Pirogov. “[But], for the project, we specifically developed three new integrations of perimeter protection, fire alarm and access control systems,” he adds.

In addition, FIFA required that the video management systems be integrated with the organization’s “black list,” which is the main database of those who are barred from World Cup venues. Additional suspects may be added to the database by federal agencies as needed. ISS’ SecurOS Face analytics were used at the Rostov-on-Don and Kaliningrad stadiums for video-analytic face capture and recognition to identify any persons on the no-entry list. The feature also made it possible to determine the exact number of people coming into the stadium through a specific entrance, says Pirogov, thus increasing the efficiency of the access control system at the entrances and exits.

Another feature that was implemented at the five stadiums ISS was involved with was SecurOS Auto, a license plate recognition analytics solution that was used to improve efficiency of employees at checkpoints on the perimeter, as well as to ensure the safety of vehicles in the parking areas of the stadiums.

Not only did the project require complex integration and a significant number of people involved, but it also required a level of adaptation and fluidity that only comes with experience. For example, says Pirogov, special premises within one of the arenas had to be equipped to allow for an increased amount of law enforcement personnel during the event, as the city’s control center did not have enough space and capacity to host them at their own facilities.

ISS, along with other vendors, integrators and general contractors, worked together to provide the surveillance needed for situational awareness for all temporary structures within the five stadiums as well, including accreditation centers, fan zones, ticket offices, security facilities, and checkpoints and police facilities at the stadiums.

The final result — according to one of the integrators for the Volgograd Arena, Jury Danilovskiy, deputy director general for construction at Task-T, Russia — was a high level of surveillance and situational awareness. “All systems and services operated closely together and proved to be reliable and effective,” Danilovskiy shares.

According to Pirogov, more than 50 percent of the staff at the ISS regional office in Russia was involved in the project at some point during the process. Due to the size of the project and complexity of integration and systems, the company was heavily involved with the integrators and contractors at almost every stage of the process from design and development to delivery, training and post-deployment technical support.

ISS held training in Moscow for systems integrator engineers for which official certificates were earned. The company also held on-field training conducted by its professional service team during the deployment phase. Integrators then conducted operator training at the stadiums, according to Pirogov.

While FIFA and the Russian government agencies specified a number of security needs for the project, perhaps the biggest challenge was the countless contractors, integrators, manufacturers, staff and law enforcement  that needed to work together to provide rock-solid security to fans, players, coaches, staff and citizens.

“The success of implementing technologically loaded, large-scale projects depends on the core and functional customers’, general contractors’ and executors’ level of engagement in the process,” says Aluisio Figueiredo, CEO of ISS. “While working on the creation of [the] stadiums’ safety systems, [we] were completely confident in achieving success, because we saw a high interest of the representatives of the Ministry of Sport (Sportin) and received comprehensive support from the general contractors and the organizations under their control, as well as the structures of the Ministry of Internal Affairs, the Federal Security Service and the city administrations.

“How Are Venues Around the Nation Reacting to the Manchester Bombing?”

“Planning for a Safe and Secure 2014 World Cup”