Surveillance Technology at the 2018 World Cup

Security technology was a playmaker for World Cup 2018; due to its effectiveness, the event occurred largely without incident.

In 2018, host country Russia went to great extent to ensure that it provided the tightest security possible surrounding World Cup events; news reports at the time gave us a glimpse into some of the tactics and resources. A BBC article, “World Cup 2018: Russia promises ‘unprecedented’ security” (https://bbc.in/2lae9vm), stated Russia’s military operation in Syria made the World Cup games targets for terrorism, and that Russian authorities had deployed their army, navy and air force to boost security.

“At a surveillance centre in Kaliningrad, … staff are studying CCTV images from more than 700 security cameras. Another 1,200 cameras have been installed at Kaliningrad Stadium, where England [plays] Belgium on 28 June.… “But security cameras are just the first line of defence.

“In Kaliningrad, local security forces have been training to react to a possible terrorist attack during the World Cup.

“In one exercise, elite units — the ‘Spetsnaz’ — parachuted into the football stadium to deal with a hostage scenario,” the BBC article described.

Although hostage situations are beyond the scope of work of most security integrators, video surveillance and facial recognition are not and that’s what our cover story delves into this month. One of the World Cup’s security vendors — Intelligent Security Systems (ISS), a developer of security surveillance and control systems for networked digital video and audio recording, video image pattern processing and digital data transmission — shared exclusively with SDM the scope of its work at several World Cup sites in Russia.

For the 2018 World Cup, planning began in late 2010, as government and design, engineering, construction and IT companies worked in 11 cities across Russia to prepare for the influx of visitors. Security at the stadiums before and during the 64 matches played at the World Cup must adhere to requirements and regulations set out by FIFA. For physical security, this includes a mix of human and electronic security and surveillance, both outside on the perimeter and surrounding areas, and inside the stadiums.

ISS deployed the complex video surveillance systems for five of the 12 Russian stadiums, including Rostov-on-Don, Kaliningrad, Volgograd, Nizhny Novgorod and Yekaterinburg. Those five stadiums included integration with about 8,000 cameras and more than 100 servers, from a variety of manufacturers.

Because ISS was already a provider of its VMS platform and native analytics for the five Russian city’s safe-city urban surveillance systems, it made sense to deploy the same platform in the stadiums for its integration capabilities and scalability.

While the fervor, fans and fun surrounding the World Cup are long gone from the host country, the legacy left behind is one of security being a big playmaker for World Cup 2018 — one that contributed largely to the event’s success and kept it out of the news because there wasn’t anything negative to report. That’s the way good security should be. Check out the story on page 46.

SDM recently added Courtney Wolfe as its new assistant editor. Wolfe is responsible for managing the news department — in print, on the website, and in SDM e-news. She is the person behind SDM’s social media posts on Facebook and Twitter, and she is an integral part of the magazine’s production team of editing and proofreading. 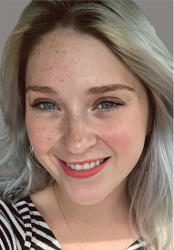