This website requires certain cookies to work and uses other cookies to help you have the best experience. By visiting this website, certain cookies have already been set, which you may delete and block. By closing this message or continuing to use our site, you agree to the use of cookies. Visit our updated privacy and cookie policy to learn more.
Home » Meet the Seventh Annual NCS4 Golden Eagle Award Finalists
SDM TopicsSDM NewswireIntegration & Network SolutionsTrends & Industry Issues
SDM Exclusive

An awards program from the National Center for Spectator Sports Safety and Security, sponsored by SDM, recognizes excellence in system integration at sporting venues. These are the 2019 finalists.

More and more, there is a massive spotlight on the security industry and its ability to prevent tragedies from happening at large sporting venues. It isn’t an easy burden to bear — there are millions of scenarios to plan for, and hundreds of thousands of human lives at stake if a mistake is allowed. So the Golden Eagle Award was created by the National Center for Spectator Sports Safety and Security (NCS4) to recognize outstanding security projects executed in sporting venues.

The security projects from the three finalists are presented here. Their case studies will be presented at the 2019 National Sports Safety and Security Conference & Exhibition, July 9-11, in New Orleans, La. The audience will then select one of them as the seventh annual Golden Eagle Award winner.

In October of 2018, Aerial Armor of Chandler, Ariz., was hired by the Albuquerque International Balloon Fiesta to detect drones that were flying during the nine-day-long event. Drone detection capabilities are an essential part of any outdoor event where a large number of people gather — drones could cause a significant hazard with the nearly 500 hot air balloons in the air, and the more than 100,000 spectators on the field at the Balloon Fiesta. While most drone operators are flying over the event simply to catch a unique overhead shot of the festivities, some could potentially have malicious intent. So Aerial Armor worked closely with the local authorities as well as numerous federal authorities to put a mitigation plan in place, and to keep the public safe.

The coverage area of the festival was 78 acres — more than 54 football fields put together. The federal authorities that Aerial Armor partnered with handled all violations within the grounds, and local authorities handled any violations outside of the balloon park. Several drone pilots were stopped prior to being able to launch their drone into the air, and a total of 300 flights were detected over the nine days, with several originating from the field.

With the increasing popularity of drones, it's becoming more crucial that event promoters have systems such as the Aerial Armor Aeroscope that can detect drones, allowing security teams and local authorities to take invasive action to identify the reckless operators. Additionally, Aerial Armor's data analytics server can be used to summarize drone flights and identify at risk behaviors. Partnering with local authorities on UAV laws and Standard Operating Procedures is another essential part of the overall strategy to mitigate the public risk.

Learn more about Aerial Armor’s work at the Balloon Fiesta at https://www.youtube.com/watch?v=aYp9UrY75EI.

Locating emergency incidents inside large stadiums can be challenging. It can take time to find a camera feed closest to an incident, and often, incident management software, maps, cameras and alarm systems exist as separate disconnected systems. In some cases, information can only be correlated between systems by consulting paper documents and binders first, which can lead to increased incident response times. 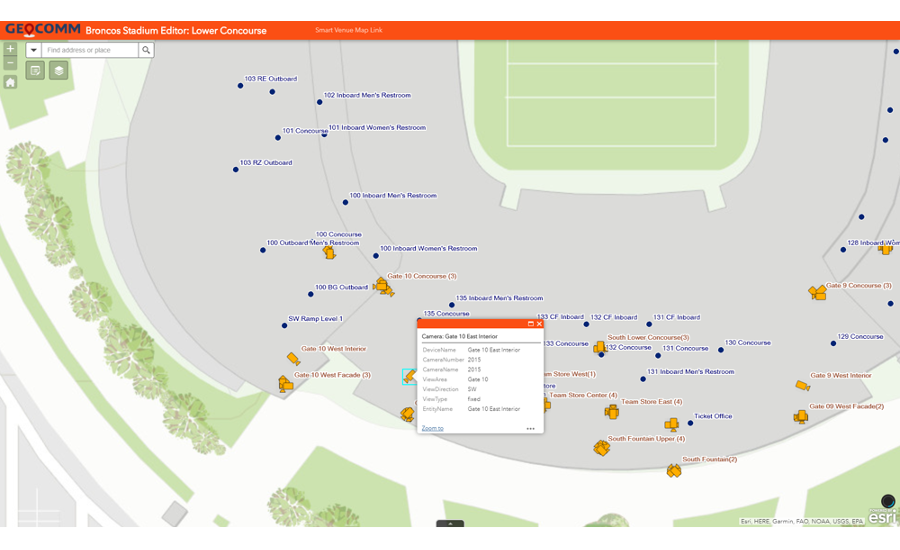 In early 2017, the security staff for the Denver Broncos, facing these problems, was introduced to the Smart Venue Map by GeoComm of Saint Cloud, Minn. Seeing this innovative software in action, the security staff immediately recognized how it could bring together feeds from all of their various sources into a single COP, which would increase their visual awareness, readiness and emergency responsiveness inside and outside the stadium.

Thus began a truly collaborative effort between GeoComm and Mile High Stadium in Denver, Colo. Through weekly meetings and by providing stadium employees an easy way to document challenges, evaluate software updates and express ideas for product improvement, this ongoing collaboration has already resulted in significant product improvements and enhancements, which stadium staff will be testing during the 2019-2020 NFL season and beyond.

Drone detection integration is one area of ongoing collaboration throughout this project. Early on, the stadium staff informed GeoComm they were evaluating a new drone detection system and inquired about its integration into the Smart Venue Map. This element of the project is currently in the beginning phases of discovery.

A mobile application add-on is also currently being evaluated by stadium staff. This could eliminate the need for security supervisors going to the command centers to view gate camera feeds during ingress and egress, empowering them to address situations in the field, which will aid in improving emergency response times.

The two parties are also collaborating on expanding the situational awareness present in the stadium’s parking lots. It was identified that there was a need for additional address points in their incident management system. So stadium staff drew upon GeoComm’s 9-1-1 addressing experience to build these address points, enhancing them to show multiple entrances and exits into the parking lots and feed the information into the Smart Venue Map which would, in turn, automatically pull up a camera feed showing the higher fidelity location information.

In June 2018, the security team at MetLife Stadium in East Rutherford, N.J. was interested in a solution that could easily capture the interactions between security staff and patrons. The goals were to improve accountability and transparency for security, reduce civil liability and to have a tool to help de-escalate volatile situations. It had to be easy to use and require minimal training.

The solution Digital Ally of Lenexa, Kan. provided is to deploy First Vu HD cameras on the security team members. This allows them to capture clear video evidence of interactions between staff and patrons. The cameras are lightweight and compact, and the technology is simple to use. The training time averages 5-10 minutes for a deployment team of 30-60 security officers. Offloading of the video at the end of the event is instantaneous.

The effectiveness and efficiency of the cameras were seen immediately upon the first deployment at MetLife. One patron complained a security officer used a racial slur while interacting with them. The camera’s recording clearly showed this had not occurred, and the patron was forced to recant the accusation. Without the camera, this would have been another he said/she said situation which could have discredited MetLife security and left them open to liability.

The feedback from the security officers has been very positive. They feel protected from false accusations and aggressive patrons, and when patrons are informed the officer is wearing a camera, their demeanor quickly changes and they become less hostile and combative. The security officers are also aware that their own behavior is recorded and are more conscious in their approach.

At the 2019 National Sports Safety and Security Conference and Exhibition in New Orleans, La., the case studies of the three finalists will be presented to conference attendees. The audience will select one of them as the seventh annual Golden Eagle Award winner.