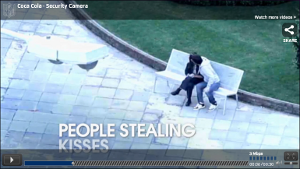 Coca-Cola’s “Let’s Look at the World a Little Differently” ad spot was ranked fourth by ADBOWL® voters after last night’s Super Bowl XLVII. If you missed it, the 30-second ad is made up of surveillance camera clips from around the world that caught a good deed in progress.

I was excited to see this ad during the broadcast and even more to find out this morning that it had been so well-received. An extended version of the ad went viral in 2012.

While some reactions on Twitter poked fun that Coca-Cola is now the official sponsor of the police state, an overwhelming number of people seemed to find the ad heartfelt and even inspiring. Best of all, this mass exposure of surveillance clips that are discernible on a large, HD screen does a lot to show those still using outdated CCTV technology what they’re missing.

Aside from the free publicity, the ad is comforting — showing that even something designed to see bad things can’t help but see the good as well. Coca-Cola wrote about the ad: “A reminder that acts of kindness and bravery are taking place around us all the time.” And that’s certainly true. Still, it occurred to me that there is also a bittersweet beauty in a surveillance video that helps law enforcement catch a criminal. The world isn’t always a scary place; but for those times when it is, I’m glad to know someone’s got an eye on us.

False alarms cost money as it requires a...

The NICET test should be taken by all...

John your leadership will be greatly missed. Thank...

We are all facing a new normal as a result of the COVID-19 pandemic. What does this new normal mean for your security business? There are steps you can take to get back on track and succeed.

Your Guide to Securing the Cannabis Industry

This webinar will educate viewers on becoming the go-to source for the safety and security of Marijuana farms, dispensaries and all of the other moving pieces of the industry — while also providing an opportunity for professional accreditation.
View All Submit An Event

As the cover asserts, security systems integration work is in demand from all corners of the market, giving 2020 Top Systems Integrators boundless opportunities in traditional systems as well as on fast-growing hosted/managed security solutions.