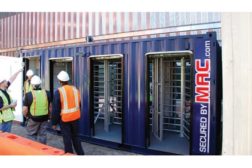 Modular Security Systems Inc. (MSSI) announced in October 2008 that it had received a formal notice of allowance from the U.S. Patent and Trademark Office for its intellectual property application for the now patented Modular Access Control (MAC) Portal. Six years later, in October 2014, MSSI announced it received another patent for the MAC Portal in the European Union applicable to the 38 member states European Patent Organization.