Once considered a cost-prohibitive niche product for specialized applications, megapixel cameras now come in a variety of form factors for uses within a wide cross section of video surveillance applications. Industry experts explain the technology’s latest trends and use cases.

Every time a manufacturer releases a video surveillance camera with higher megapixels than ever before, it makes headlines. Eight megapixels, 12 megapixels, 20 megapixels — the pixels keep getting higher and higher, but does this mean surveillance systems are getting better? Here we examine what lies ahead for sensor and compression technology and share advice from security providers on how to make smart choices about megapixel cameras.

Other than the number of pixels, the differences between megapixel cameras today and those from years past include edge computing, improved analytics and advanced compression (see sidebar). Enhanced low-light capabilities and higher frame rates further boost image quality, and today’s megapixel cameras are offered at a more cost-efficient price point as well.

“Five years ago, the main resolution was 1MP/720p, which was really leading edge at that time,” reflects Steve Burdet, manager, new systems and solutions at Axis Communications in Chelmsford, Mass. “Megapixel cameras used to perform poorly in low light, in compression, in frame rate and in wide dynamic range [WDR], but with advancements in processing and image sensors, these have become miniscule up to 6MP — and with a small gap in 4K and upwards, which continues to close. We are even able to produce multi-sensor, high-megapixel products with full frame rate, which would never have been possible five years ago.”

Security dealers and integrators appreciate the high-quality engineering and powerful features of present-day megapixel cameras. Matt Nelson, engineering program manager at Tempe, Ariz.-based Premise One calls them “purpose-built,” with AI and analytics among the drivers.

When selling and installing high-megapixel cameras, an abundance of technological considerations come into play. Here are some guidelines from a half-dozen integration specialists to foolproof your installations

“Even with proposing new higher resolution cameras, security providers need to ensure that the customer has a compatible monitor. Selling a 12MP camera and not having a high-resolution monitor for live viewing or even playback doesn’t really do the camera any justice.” — Josh Zunk, Custom Alarm

“Remember the recording server or NVR needs to be able to record that resolution as well. Since recording at high resolution will consume hard disk drive [HDD] space rapidly, it is important to plan ahead for recording length. Cat5e or Cat6 Cables and patch cables will be needed for high-resolution recording, making some existing infrastructure useless in many upgrades.” — Fletcher Pinkham, Focus Tech

“Don’t forget to check compatibility with the customer’s existing VMS platform. For any dealer the most important decision is to verify the cameras and all the features are compatible with the system they are installing.” — Michael Riotto, AVS Technology

“Rather than customize solutions for a setting, camera manufacturers are designing to the setting. When considering the best application of a camera, it is easier to pair these higher-end cameras to the setting where you are installing them.” — Matt Nelson, Premise One

“Pay attention to scene lighting. Because higher-megapixel imagers have smaller sensors, their light-gathering capabilities are limited. Areas such as parking lots or driveways can be especially challenging and may require trips from an installer at multiple times of day to ensure good video. Something that looks great during the day may be completely unusable at night due to low light or headlight bloom.” — Jim Cooper, Integrated Security Communications

Michael Riotto, president of AVS Technology in Totowa, N.J., acknowledges the effectiveness of today’s 180-deg. to 360-deg. viewing for complex locations. “Megapixel cameras from five to 10 years ago typically only provided one view, so multiple cameras were required to cover a location,” he explains. “Additionally, higher resolution cameras now allow for a greater degree of placement flexibility overall, minimizing installation costs.” 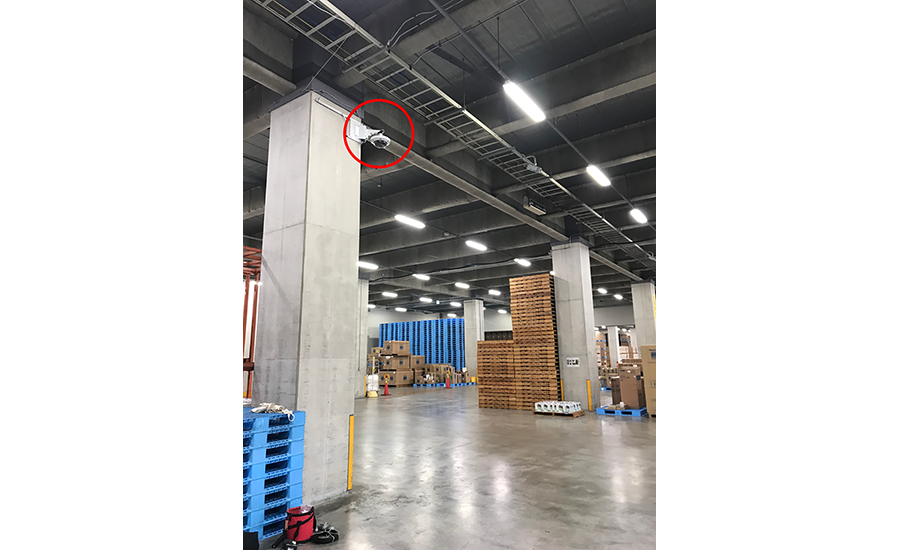 Leading the advancements of megapixel cameras are the image sensors, which have improved with every generation. This means less noise and higher performance in low light, allowing high megapixel cameras to truly be used anywhere, says Aaron Saks, Hanwha Techwin America’s senior technical marketing and training manager in Teaneck, N.J.

“Cameras from the previous decade could easily wash out in bright lighting or lose definition in the shadows. Even in the most challenging lighting conditions, modern megapixel cameras deliver more crucial information for every pixel, which can be the difference between using video evidence to get a conviction or not.”

Bob Germain, director, hardware product management for Vicon Industries in Hauppauge, N.Y., concurs. “Sensors such as Sony Starvis are now being designed specifically for the surveillance camera market, with the pixel design being optimized to provide very low-light color or ‘starlight’ images. This provides additional forensic data, improving accurate identification of people or vehicles of interest.”

Garms continues, “This is accomplished by generating two readouts from one short exposure with different gain levels. The lens-sensor combination generates an HDR image without any HDR blur and artifacts. The result is an enhanced dynamic range that is motion-optimized.”

Liu-Edmonds speaks of additional sensor upgrades. “Digital noise reduction techniques have increased low-light performance substantially while preserving color information. Higher frame rates and shutter control results in smooth motion capture with less blur than previous generation sensors. And AI is being used to inform image processing about which objects in an image, such as faces, are important to capture with the highest clarity.”

With higher megapixels comes the need for better compression technology. What will video compression look like in the coming years? We asked manufacturers how they were addressing this need.

“Compression tech will continue to get smarter with the availability of more processing and parallel processing logics. Processing the same image differently at faster speeds will offer many benefits, including enhanced analytic processing and of course improvements in image processing as well.” — Steve Burdet, Axis Communications

“Smart coding technology reduces the total bandwidth by categorizing and recording different areas of the image at one of three quality levels, ranging from highest quality recording of faces to low quality recording in areas with no movement. It ensures evidential quality recording whilst maintaining background scenery at a lower bitrate. In the coming years, compression technology will advance even further with new codecs such as the Alliance for Open Media’s AV1 or the VVC codec from the Joint Video Experts Team.” —  Jessica Liu-Edmonds, i-PRO Americas

What lies in store for sensor technology? “The future of sensors will be a continuum of what we already see — better low-light performance, faster frame rate, improved noise reduction, etc.,” Burdet predicts. “While this may sound standard, it’s actually extremely complex, and remarkable, to keep making this sort of progress. Many new concepts are being explored to achieve these new levels of performance, like light transference and rendering.”

John Xiao, vice president of marketing at Hikvision USA in City of Industry, Calif., provides further insight. “Being able to zoom in on a relatively small dot within the whole image without pixilation and while maintaining image clarity is something we will see more of. As end users require clear color images at night, the size of security camera apertures and sensors are becoming larger to collect more light and produce a sharper, full color image 24/7,” he says. 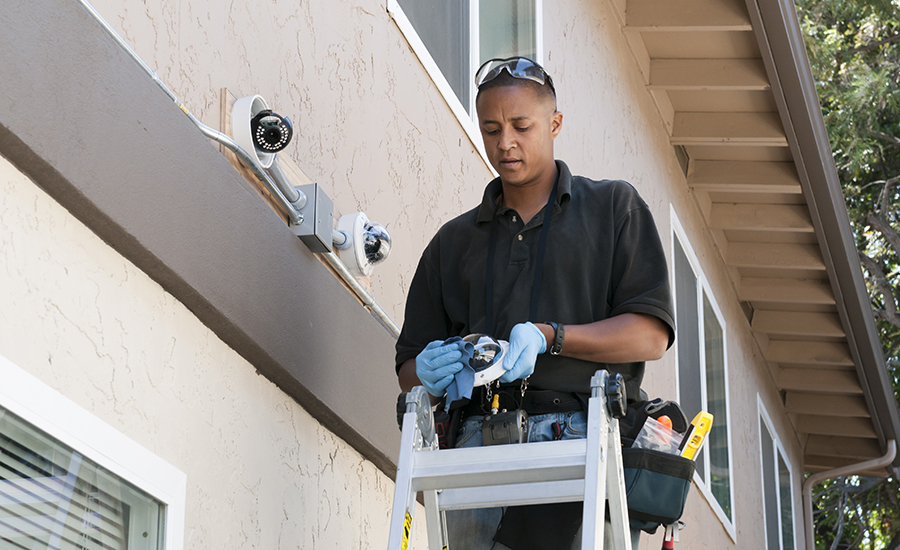 Some megapixel cameras feature a pair sensors, one for IR imaging and another for visible light to reproduced full color. // LEEZSNOW/E+ VIA GETTY IMAGES

Xiao explains another trend is a single lens camera featuring two sensors. “One sensor is for IR imaging that ensures that video footage is bright and sharp, and the other is for visible light that allows video images to be reproduced in full and vivid color. Both sensor signals work together to create a single bright, full color image in light conditions as low as 0.0005 lux.”

Liu-Edmonds talks about the algorithmic benefits the industry can look forward to in megapixel cameras.

“As more AI-based deep learning algorithms are added into the signal processing chain, features such as object detection will further inform digital signal processing and shutter speeds, ensuring that an object of interest is captured at maximum resolution,” she explains. “Sensor technology is becoming increasingly smart in that edge-based algorithms can modify signal processing in real time to produce the best possible images based on current environmental conditions.”

For example, when objects speed up, sensors can adapt shutter speeds; pixels of interest will have less compression than static background pixels. “Beyond that the sky is the limit with stacked layers of pixels being controlled by embedded AI to combine pixel information into the ultimate high-resolution rendering of a scene,” Liu-Edmonds continues.

The megapixel cameras of today are providing greater advantages than the pricey, technologically limited cameras of yesterday, with more advancements already in the works, Burdet notes.

“These advancements are truly part of the secret sauce of what makes megapixel cameras so remarkable,” he continues. “The progression of more powerful compression technology and higher-performing image sensors will bring more meaningful video data into security applications.”