By David Engebretson
Before a security system is installed on a clientâ€™s data network, there is significant preparation work that must be done. The network must be tested to determine how it is configured and what its capabilities are. Your clientâ€™s IT department must be informed about how much bandwidth will be used. In addition, technicians must be familiar with how to use command line functions and how to test Ethernet capabilities. Here are some suggestions for how to perform many of these evaluations.

How can a clientâ€™s network be tested for its capabilities to connect security devices, such as DVRs and video servers?

Although typical Ethernet and Internet communications utilize common forms of addressing and infrastructure, each individual clientâ€™s network arrangement can and will be unique. Testing the configuration and capabilities of a particular network is very important when planning the installation of network-enabled security devices.

Typical tests for security installations would include Internet bandwidth testing, enterprise packet details, network traffic analysis, security scanning, and overall network configuration. There is a lot of activity and communications going on â€œbehind the scenesâ€ in a network. A number of software tools are available that will illuminate the performance of a network, and provide information regarding the effects of adding video transmissions to existing network traffic. Having these programs preloaded onto a technicianâ€™s laptop computer can provide quick testing capabilities and valuable information for network security system installations.

To test for Internet bandwidth, connect the laptop to the clientâ€™s network via Wi-Fi or Ethernet, and visit http://www.dslreports.com/stest using the web browser. Follow the instructions, and within a minute or two test results will appear. Hereâ€™s an example:

Remember that the bandwidth indicated may be distorted by others on the network using the Internet connection at the same time.

These test results show the amount of Internet bandwidth “downstream” to the testing computer and “upstream” to the Internet, in kilobits.

A very useful way of figuring out whatâ€™s going on with a particular network is by using a network protocol analyzer such as Ethereal, a free program available at http://www.ethereal.com. After following the instructions for downloading â€“ including the downloading of an additional program called WinPcap â€“ the Ethereal program will be placed on your desktop, ready for use. After turning on the software, simple selections can be made that will set up a â€œcaptureâ€ sequence, copying all of the details of all packet traffic transmitted on a particular Ethernet network or segment. Once the capture has started, packets are recorded, and can be reviewed for their content. This can be a powerful educational experience for networking novices, as all packets are presented on the screen, and the behind-the-scenes workings of Ethernet can be viewed and analyzed.

As configured, this graph shows in real time the overall network traffic of UDP packets (green), TCP packets (red), and all total packets in yellow.

Graphic representations of network traffic are often useful to quickly determine what the typical levels of traffic are on a particular network, and what happens when a high-bandwidth device such as a streaming video server is connected. Available at http://lastbit.com/ trafmeter/Default.asp, the free version of TrafMeter can be configured to provide simple line-graph information, showing the overall amounts of network traffic and various subclassifications of Ethernet packet types. In the example on the facing page, the yellow line represents overall network traffic, while the green line shows the bandwidth consumed by a typical UDP transmitting video server. On a larger scale, IT personnel will use programs like TrafMeter to provide constant monitoring of their network traffic, allowing them to analyze network traffic and issues both in real-time and by later review.

A major concern for any Internet-connected computer or network is the potential for hacking by outsiders. A simple and effective test for basic anti-hacking capabilities of a networkâ€™s firewall configurations is available over the Internet. Visit http://www.grc.com, and advance through the web page to the Shieldâ€™s UP! testing selection. This program will attempt to penetrate the ports of the network being tested, and will present results indicating which, if any, ports are open to outside penetration.

SyPixx Networks Inc., a supplier of fiber and Ethernet security networking interfacing equipment, is providing an innovative software package that graphically displays and monitors the individually addressed devices on a particular network. This program, called ClearMap, uses the â€œpingâ€ command to constantly check for devices on a network, displaying their location, product brand, network name, and/or IP addresses. Graphics files can be associated with individual devices, so that a picture of the device or the instruction manual can be quickly retrieved and displayed on the viewing screen. Alarms can be generated if a device is removed, or if a new device is added to the network. When run on a network server, ClearMap provides a constant supervision of network devices, adding a critical security element to networking. Device monitoring software such as ClearMap is critical to high-security networking systems, because the addition of a wireless or wired rogue computer can open many possibilities for hacking, information theft, and network disruption.

Networking video signals provides great potential benefits for security companies and their customers, as video signals can be connected to existing cabling, sent over local networks and/or the Internet, and viewed and recorded in multiple locations. Due to large bandwidth requirements, it can be difficult to convince a clientâ€™s IT personnel to allow video encoders to be installed on their networks, as IT may fear that the video signals will crowd out other enterprise network communications.

One important concept is that the specified 100 Mbps communications capability of a typical Ethernet network describes the communications between individual addressed devices and a switch or hub, and isnâ€™t a cumulative bandwidth for the entire network.

Which network switches are connected to video encoders will have an important impact on how much bandwidth is used for video on a particular network segment. Letâ€™s look at an example (see illustration above).

Each switch connection provides up to 100 Mbps bandwidth, which is generally reduced to 50-60 Mbps because of cabling and equipment issues. If we connect five 2-Mbps video encoders to one switch, 10 Mbps of bandwidth between the switches will be consumed by the video streams.

Using longer coax connections between the camera and the video encoder can allow encoders to be housed and connected to the network in telecommunications closets far from a cameraâ€™s location. If an installation is planned so that the video encoder connections are spread among a number of switches, there is less impact on each network segment connecting the switches, and less effect on other enterprise data communications that are using the same segments (see graph): 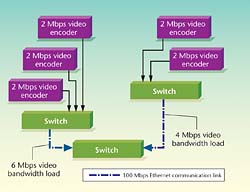 Ted Curtin of RepWorks, South Hadley, Mass., suggests that one of the best ways to convince reluctant IT personnel to allow the connection of video encoders to their networks is to provide the clientâ€™s IT personnel with a video encoder, appropriate camera, power supply, and viewing software (if needed) for a week or two so that the IT department can connect the devices to their network and monitor the bandwidth requirements.

There are many useful testing and confirmation tools available from the â€œcommandâ€ line in Microsoft Windows. To reach the command line, click â€œStart,â€ then â€œRun.â€ In the dialog box, enter â€œcmd.â€ A box will appear on the computer screen, with a â€œC:>â€ prompt line. From here, technicians can test various network communications and receive local network addressing information.

Here are some of the common commands, and their typical results:

For example, letâ€™s assume that a network-enabled intercom interface is to be connected to a specific open RJ-45 port in the telecommunications closet. Itâ€™s important to remember that the specific cabling and connector to be used within the telecommunications closet may have been incorrectly terminated, or may have suffered some damage from other technicians. There are three questions that need to be answered prior to the successful connection of the intercom device:

1. Is the RJ-45 female connector properly connected to the network?

There are three possible ways to test for these important factors. If the intercom device in the example has already been addressed to go onto the network, the technician could plug it in, power it up, and see if it works. However this approach could cause the technician to assume that the intercom device is defective if it doesnâ€™t work, when the problem could be in the cabling or Ethernet compatibility. This technique also would require that any management software be installed in the head-end computer, which may create cascading issues that can cause the technician to make incorrect assumptions.

Using a laptop, the technician could plug the computer into the target RJ-45 port, set the laptop for DHCP addressing, connect to the enterprise Ethernet network, and â€œpingâ€ another computer on the network. If the ping is successful, the RJ-45 port is correctly wired, and the network is providing Ethernet communications. Clicking the Network connection icon on the Windows desktop will bring up a screen showing the connection speed, as illustrated here for a Wi-Fi connection:

This laptop test can work, provided that the network is set to issue DHCP IP addresses to any device connected to it, without any security or MAC level filtering. This type of testing is slow and cumbersome, relies on network DHCP addressing that may not be present, and can potentially damage the testing laptop if the RJ-45 port is miswired.

The third method is probably the surest test available. Inexpensive Ethernet testers, such as the Byte Brothers TVR 10/100, can be plugged into the target RJ-45 port, and within seconds indicate whether the port is correctly wired, Ethernet is present, and which data speed, 10 or 100 Mbps, is available. (Visit www.bytebrothers.com or call (425) 917-8380.) If the tester indicates a problem, the security technician can inform building management of the problem and ask them to fix it. Because of its speed, simple usage, and portability, this type of tester provides a great value to security technicians.

All RJ-45 ports to which network-enabled security devices are to be connected should be tested using one of these methods prior to starting an installation.