Corporate security managers have rethought their approach to access gates since the terrorist attacks of September 11, 2001. Some have added gates where none existed previously, while others who previously used gates only as a deterrent now are counting on them to prevent unwanted vehicle entry.

â€œSeventy-five percent of the gates that we have now are a result of 9/11,â€ says Dick Robert, security manager for Chelan County Public Utility District, Wenatchee, Wash. â€œBefore they were there as a deterrent. Now we have gates that are actually going to stop something.â€

Organizations such as Chelan County PUD have been impacted the most because regulations now require strict adherence to high security measures. Chelan County PUD now emulates measures implemented by the Department of Defense, using gates that cost $30,000 to $40,000 each. The life expectancy of those gates is about five to seven years, says Robert, who budgets to automatically replace each of them on either a five- or seven-year cycle. â€œWe donâ€™t want to take them to the failing point,â€ he says.

After making such a hefty investment in each gate, Robert insists that his systems integrator demonstrate that any installer working on the gate has been factory trained. â€œWe donâ€™t want to train them on our site,â€ Robert adds.

The needs of Chelan County PUD are more exacting than those of many organizations. But even companies that use access gates primarily as a deterrent have beefed up security through other means. Passcards seem to be the preferred method for controlling access to parking lots and other secured areas. But since September 11, some security managers have added anti-passback and exit gate ground loops to those systems to offer an extra level of protection against unauthorized entry.

Anti-passback systems require the use of a passcard to exit as well as to enter a facility. Their goal is to prevent a passcard from being used to enter a facility unless the cardholder has previously exited. As Jeffrey Rechsteiner, security systems administrator for the New Jersey Department of Treasury, Trenton, N.J., points out, anti-passback systems have the added benefit of helping prevent those unauthorized users who are more of a nuisance than a security risk.

Ground loops are sensors that detect vehicles as they pass. Traditionally they are installed at entrance gates to trigger the gate to close after a vehicle has passed through it. But increasingly, security managers are adding exit gates with ground loops to prevent people from driving in through an unprotected exit ramp.

Rechsteiner advocates using arming loops as well closing loops at entry and exit gates, and has added more of them since 9/11. Although some parking facilities only use closing loops, adding arming loops on the approach to a gate helps ensure that the person using a passcard to open the gate is actually in a vehicle. Without such assurance, the gate could stay open indefinitely because no vehicle would trigger the closing loop to close it.

But the biggest change that the New Jersey Department of Treasury has made since 9/11 is aimed at ensuring that passcards are used only by the cardholder. â€œWeâ€™re looking now for a photo ID as well as a vehicle access card,â€ Rechsteiner says. The department has set up its system so that a photo of each user pops up on the guard screen when he or she uses his or her vehicle access card. 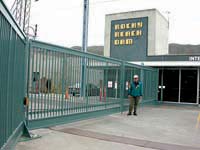 Prior to Sept. 11, 2001, access gates employed by the Chelan County Public Utility District in Wenatchee, Wash., were primarily used for deterrence. These days, as demonstrated by Tom Treat, operations manager at the Rocky Reach Hydroelectric Project, they are intended to stop unwanted entries.

Security managers agree that the average life of a security gate is about five years. The price tag for gates that are used only as a deterrent is substantially less than for the highest security variety.

Many security managers say they do not budget for access gate replacement after a certain number of years, but instead replace gates only when they begin to fail. â€œWhen it gets close to its life expectancy, we do more checks,â€ says Mike Smith, corporate security manager for NRG Energy Inc., Tonawanda, N.Y. â€œIf it takes us by surprise and fails, we can man the gate around the clock.â€

Smith sees the quality of the motor as the most important criteria in selecting an access gate. â€œThe motors have to be heavy duty,â€ he says. â€œWe tried to get away with chain drive motors, but realized that you get what you pay for.â€

Because security managers often do not have personnel assigned to individual parking lots or garages, many of them look for remote control capability in selecting an access gate system. In the event that there is unusually high traffic, or for another reason, itâ€™s important to be able to open the gate without sending someone out to the site to do it, Rechsteiner says. He also looks for the ability to have the gate automatically reset at a certain time â€“ say, 5:30 p.m.

Another capability that Rechsteiner looks for in a system is the ability for it to direct all of the gates to open in the event of a power failure.

What kinds of upgrades would security managers like to make to their access gate systems? Childrenâ€™s Medical Center wants to put in turnstile access gates to provide after-hour passcard entry for employees, who are currently handled by a guard. This would enable visitors, who would still have to check in with the guard, to be handled more promptly.

The New Jersey Treasury wants to add an extra level of integration to its access gate system so that a single identity card with a photo of the cardholder would provide vehicle access and fulfill other security needs.

â€¢ Use anti-passback to prevent multiple users from entering a parking facility with a single card.

â€¢ Position closing loops close to the access gate to help ensure that only a single vehicle can get through on a single card swipe, cautions Steve Pickett, director of security for Childrenâ€™s Medical Center, Dallas, Texas. (If the ground loop is positioned too far out, the gate will go down later, potentially enabling the tailgate of a second car to slip under.)

â€¢ Use arming loops as well closing loops at entry and exit gates. Positioned on the approach to a gate, arming loops help prevent people from opening the gate with their access card but without a vehicle. That, in turn, prevents the gate from becoming suspended in an up position when no vehicle activates the closing loop.

â€¢ Position video surveillance cameras to get a shot of each driverâ€™s face as he or she uses a card access system.

â€¢ Install alarm contacts on rollup gates so that you know when it is in an â€œupâ€ position, recommends Jeffrey Rechsteiner, security systems administrator for the New Jersey Department of Treasury, Trenton, N.J.

â€¢ Remote control of an access gate system can be important for unmanned facilities. Position the remote control in a guard booth, Rechsteiner says. But, he adds, be sure to lock it with a keyswitch to prevent unauthorized use when the guard booth is unmanned.

â€¢ Donâ€™t become complacent about suppliers, Pickett says. Just because youâ€™ve used a manufacturer for years doesnâ€™t mean itâ€™s the best choice for every installation. â€œSome people are loyal to a fault,â€ he adds. â€œYou need to scope out whatâ€™s out there.â€

â€¢ Integrators should either provide regular maintenance or educate their clients about providing their own maintenance. Oil and visually inspect parts at regular intervals, and check electronic parts periodically for proper voltage.

â€¢ Gate installations require a hybrid mix of mechanical and electrical skills. Only properly trained installers should do the job.