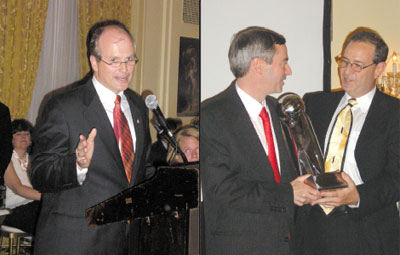 David Avritt, SentryNet, received SIA's George R. Lippert Memorial Award. Mineau has long been praised for his work in the area of education. As an active member in NBFAA and CSAA, and as a past-president of SIA, Mineau has initiated and led several education initiatives that have had substantial impact on the industry. During his tenure as president of SIA, Mineau established a $500,000 development fund for security industry education programs. An advocate for NBFAA's Apprenticeship program, Mineau founded a $100,000 fund to support the development of this crucial professional accreditation.

Avritt has played an instrumental role in the establishment and work of SIA's Monitoring Industry Group. SIA's Central Station Monitoring Course is a direct product of Avritt's vision for what he saw as the responsibility for the industry's associations.