Last September, as the U.S. economy went from bad to worse, security dealers and integrators were holding their breath. As major U.S. employers continued to announce layoffs, electronic security companies were -- for the most part -- still issuing paychecks and, in many cases, hiring salespeople, technicians, and project managers. And as consumer confidence slipped last fall to its lowest level since 1994 and a recession was officially announced, many security businesses couldn't answer the phones fast enough.

Bad times often equal good business -- it's the nature of the security industry.

Not that there isn't a dark side. Fearing that unemployment and reduced consumer spending might push up cancellations and pinch their recurring monthly revenue, security dealers have placed a much higher priority on both cost-cutting and profit protection this year. And a slow-down in select markets could spell trouble ahead, especially for dealers and integrators who serve niche industries that have been hit by the recession.

SDM's 2002 Forecast Survey, conducted among 2,000 dealers and integrators from late-September to late-October 2001, indicates that they are mildly positive about 2002. More than 6 of 10 survey respondents are expecting 2002 revenue to gain -- 15 percent on average -- while three of 10 expect no growth, and one of 10 envision a downturn.

The optimists cited security concerns caused by terrorism, as well as crime in general, as two main factors that will surge spending on security equipment and services in 2002:

People have "deep concerns about personal safety," said one respondent.

"Since the attack on the World Trade Center, more people will want protection," said another.

"Crime is on the upswing due to unemployment," wrote yet another. (Anonymity has been preserved for Forecast Survey respondents.) The respondents also said that certain technologies, such as remote video monitoring, identification, and access control, will be in greater demand and therefore responsible for higher sales.

In which market segments do security professionals expect to prosper in 2002? High-end residential, high-end commercial, and small commercial are the top three market segments in which survey respondents anticipate the most growth in 2002

Dealers' expectations probably will be met in the non-residential sector, where security buyers plan to increase spending on security products and services. In fact, the average anticipated spending in 2002 among security departments is up almost 8 percent, to $580,851 per department.

Another way to gauge growing technologies is to ask survey respondents which products they currently purchase and how they expect those purchases to change.

Video surveillance is also the one category in which the greatest percentage of dealers and integrators expect to increase their purchases in 2002. The trend here is echoed by end-users. SECURITY Magazine reports that businesses expect to purchase video surveillance more than any other type of electronic equipment.

With more businesses focusing on restricting entry to not only sensitive areas, but also public areas of buildings, access control systems definitely won't take a back seat.

Dealers and integrators cited economic conditions as the No. 1 factor they feel will most significantly affect sales of security systems in 2002, followed by crime, No. 2, and residential building activity, No. 3.

The first two factors affect both residential and non-residential markets, while the third -- tied to residential -- takes on even greater import than in previous years. Residential building activity not only affects sales of security systems but also home networking and other residential systems.

As a percentage of total dealer/integrator revenue, home systems increased from 6 percent in 2000 to 8 percent in 2001 -- reaching its highest level since SDM began measuring this category in 1997.

But these relatively high levels of product purchasing in 2001 contrast with expectations for 2002. The survey shows that a significant minority of dealers indicates that their purchasing levels may decline in 2002. Perhaps their projections are based on news of fewer housing starts, higher unemployment, and tighter consumer spending.

On the other hand, fear of terrorism and other crime could counterbalance the effect of lower housing starts and cause a surge in spending on certain home electronics.

A Los Angeles Times article about holiday shopping ("It's All About Family Values," Nov. 29, 2001) stated that consumers' holiday spending is driven by a desire to enjoy life and be more "family- and people-oriented.

"That desire has driven sales of home entertainment devices, from DVD players and game consoles to home theater systems to high-end television sets," the article stated. It went on to explain that, "Cameras and monitoring equipment have taken off like crazy in the last three months," according to Brent Rusick, vice president of sales at Buy.com, an Internet retailer. "Home security systems have really become a phenomenon. For some reason, people's sense of security has changed."

Many dealers may be well-positioned to take advantage of a heightened interest in home security, as SDM's Forecast Survey found a greater percentage who participates in dealer programs. Nearly four of every 10 dealers belongs to at least one authorized dealer program, utilizing marketing tools such as a recognized brand name, sales and marketing aids including leads, and equipment discounts (top three benefits ranked by dealers).

One of the key measures of the state of the residential market is the average price of a security system. Not surprisingly, the average price had risen steadily between 1996 and 1999. Then in 2000, it dropped sharply, followed by a 10 percent decline in 2001 to $1,293.

Two consecutive years of average price declines could be attributed to market pressure; as penetration climbs, competition becomes more intense. It also could be attributed to a bundling of residential systems that makes it more difficult to report the true price for the security-only portion. Dealers don't expect much fluctuation in these prices in 2002.

Both the average and median monthly monitoring price of a residential system in 2001 was $22, according to the Forecast Survey. Dealers don't expect much change in this figure, either.

It remains to be seen if these markets will be fruitful. In today's economic climate, the coin could fall either way.

For certain, there is increased caution regarding 2002: The group of respondents who thinks revenues will increase in 2002 is 10 percentage points lower than in 2001.

For many years, dealers reported that labor was a major business challenge. However, that challenge has been replaced by other, financial concerns. In the 2002 Forecast Survey, dealers and integrators reporedt that protecting profit margins will be their top challenge over the next three years, followed by controlling costs. As the economy clamps down, many dealers have said their first priority is to avoid lay-offs. If so, then cost-cutting in other areas is unavoidable. If residential prices are declining, then perhaps dealers are being pushed to sell higher-profit systems to offset the losses from burglar alarms.

The acquisition market may be one important indicator of growth. A spike in consolidation activity was noted in 2001. The Forecast Survey showed that 12 percent of dealers and integrators purchased another security installing company in 2001 -- up nearly 6 percentage points from the prior year. 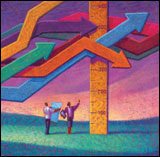 The purpose of SDM's Forecast Survey is to measure current year sales activity and product consumption, current-year revenues, business challenges and market opportunities, and other factors.

The survey, conducted annually since 1982, was mailed to a random sample of 2,000 SDM subscribers (installing dealers with and without central stations, systems integrators) during the week of Sept. 25, 2001. The number of usable replies at the cut-off date of Oct. 23, 2001, translated to a 15 percent response rate. 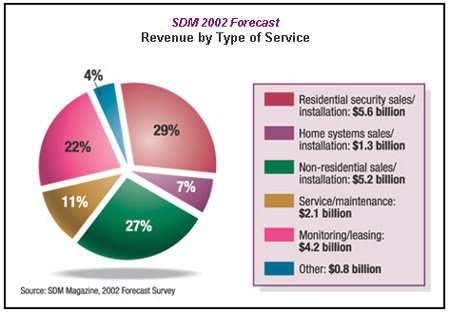 Total annual revenue is broken down by type of service provided: monitoring/leasing picked up a slightly larger share of the pie in 2001 (3 percentage points), compared with 2000. 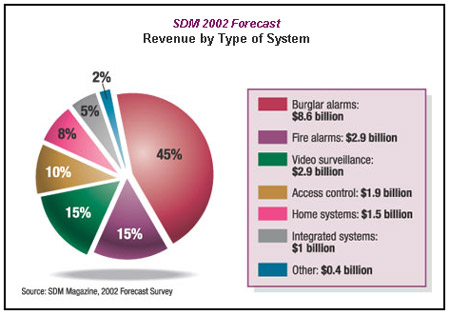 Total annual revenue is broken down by type of equipment sold: burglar alarm share has steadily declined as a percentage of the whole over the past several years; CCTV, access control, and home systems gained in share in 2001. 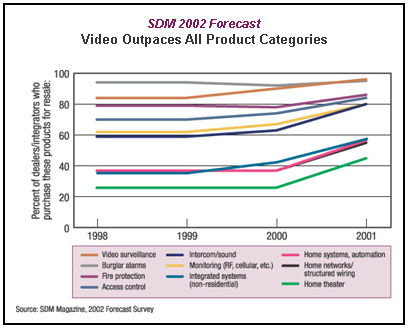 For the first time, more security dealers and integrators purchased video surveillance equipment more than any other product category.

The single-most important factor to affect electronic security sales over the next three years will be economic conditions.

The focus in 2002, despite growth of 6 percent in 2001, is protecting profit and controlling costs.

Revenue from electronic security system sales, installation, service, and monitoring clocked in at $19.2 billion in 2001.