Software-as-a-service can provide dashboard control for multiple customer locations.
The term “dashboard” is relatively new to the security industry. But it’s been used for decades in the automotive world to describe readouts and controls for multiple systems â€” all placed within easy reach of the driver. When a driver is at the wheel, he needs readouts and controls to be simple enough that he only needs to take his eyes off the road for a second to determine system status â€” Is the engine hot? â€” or make an adjustment â€” There’s nothing worse than Aerosmith, gotta change that station NOW.

In the security world, the specifics are different but the concept is the same. To optimally monitor a facility, security personnel often need to be able to interact with multiple systems, including video surveillance, access control and less traditional systems such as building management or human resource software â€” or even intercoms based on voice-over Internet protocol (VoIP). Dashboard-style software interfaces use easy-to-understand graphics to display system status and often have embedded logic that automatically presents the most critical information to the user at any given moment.

Not every organization has security personnel dedicated 24/7 to monitoring their facility. The most basic dashboards add value for infrequent users by simplifying the user’s interaction with system controls. 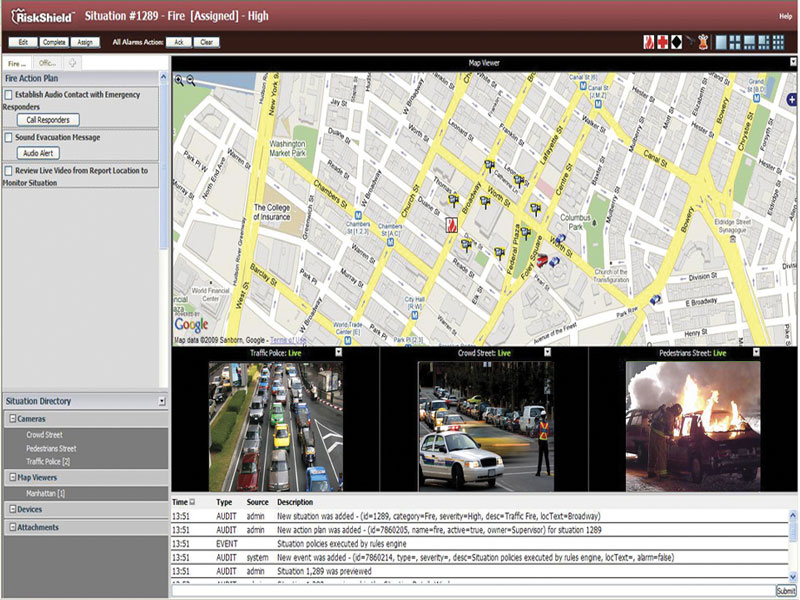 In recent years, software developers have created a variety of new types of interfaces aimed at simplifying users’ ability to control systems. For example, as large video files have found their way into more and more applications based on Internet protocol (IP), many software programs have begun to use “thumbnail” videos to help end users easily identify a video feed or recording. By clicking on the thumbnail, viewers can easily enlarge and view the associated video.

Video management software or other software with simplified user interfaces such as thumbnail videos or maps might be considered to provide dashboard control. Other forms of dashboard control might provide a graphical display of historical data. For example, a dashboard might display energy usage over time by different occupants using a vacation or rental home, notes Steve Surfaro, strategic channel manager for Chemsford, Mass.-based Axis Communications.

Some dashboard controls make extensive use of metadata, or data about data. A video system, for example, might be able to “quantify object size, color, direction and velocity,” Surfaro describes. “If you have wonderful H.264 video and metadata, and if you have a strong platform that can run algorithms, you can run a simple algorithm in the camera that can count people or track people or objects of a certain size.”

While this may sound a lot like video analytics, Surfaro prefers to use the term “analysis.” The difference, he says, is that “analytics are a snapshot in time using object detection or recognition; analysis is multiple discrete analytics running over time.”

Some companies, including Cisco, offer software programs that can be used to essentially create overlays to other control software. This allows users to add dashboard interfaces such as thumbnail videos and maps to simplify operation, if the control software does not already provide those capabilities.

Cisco has seen strong interest in this option from organizations where non-security personnel need to be able to access and control the security system, explains Steve Colleen, director of marketing for Cisco Systems physical security business unit, based in San Jose, Calif.

“At a school, the principal, faculty and security guard may need to operate the system,” Colleen says. “You’re dealing with power as well as basic users, and you need to be able to offer something for both.”

The solution, he says, is to provide a “partitioned custom view within a single system â€” one operator gets one view and one gets another.”

Traditionally much of the software controlling security systems has been proprietary, making it virtually impossible to overlay new software onto an existing system. But increasingly, manufacturers are providing open application programming interfaces or software development kits that can support overlays or be used to enable multiple systems to interact with one another.

Some video management software, for example, can be used to control equipment from a wide range of manufacturers â€” and even from disparate systems, such as access control and video analytics. “If there is an access control platform we desire to integrate with, we can write the integration or vice versa,” says Roger Shuman, marketing manager for Exacq Technologies, an Indianapolis-based video management software provider. “The access control manufacturer can obtain our software development kit with a non-disclosure and write it themselves.”

Shuman likens the result to Microsoft’s Outlook software suite that combines e-mail, calendar and contacts all in one place and is managed from a single application. “Some people like to have our software at the front end and have the access control in the background,” Shuman notes. “Watching video is more interesting than looking at a screen with a bunch of numbers,” he says.

Some security control rooms have multiple screens displaying images or status indicators from multiple cameras and systems. Modern software tools can enable the same effect on a single screen using open interfaces to create a form of dashboard control that Dave Fowler calls a “mash up.”

“You’re taking the hardware that was on a wall and putting it on a console in front of the operator,” notes Fowler, who is senior vice president of product development and marketing for Vienna, Va.-based software developer VidSys,

A more sophisticated form of dashboard control takes that concept a step further by adding analytic and logical functionality to oversee and control the operation of multiple systems. The primary example of this type of dashboard control is described in the Physical Security Information Management standard.

The PSIM standard enables multiple types of equipment to interface, typically through a software gateway provided by a third party, and as Fowler describes, the goal is “to do what the operator would do to synthesize all that data.”

Essentially, he claims, “You’re taking the logic out of the operator’s head and putting it into the system.” If, for example, a specific event manifests itself in multiple ways â€” such as simultaneous alarms from fire and access control systems â€” a PSIM platform should be able to synthesize that information and determine that there is a fire on a certain floor and as a result, someone propped a door open.

Automatically displaying the video associated with the affected area is another critical function, Fowler says. “No matter how good the analysis is, you still have to put something on the screen so the operator can verify it.”

Software controls with this level of sophistication are in use by departments of transportation, first responders, fire departments, emergency operations centers, port authorities and mass transit, Fowler says. “The evolution is that it goes from being agency-based to the combining of information for multiple agencies.”

Fowler points to the example of a multi-agency system in New York that was in operation when a plane crash-landed on the Hudson River.

“The ability to have eyes everywhere helped in coordinating activities,” Fowler recalls. Personnel, he says, “were watching video scattered across roadways and from helicopters flying overhead.” This resulted in better traffic control, he relates, because authorities were able to route traffic around areas where the traffic began to build up.

Fowler cites a statistic from the department of transportation that helps quantify the benefits of a PSIM platform with dashboard control. “For every minute an accident is open on a highway, it takes 10 minutes to clean it up,” he says. “If you can respond faster, you have faster cleanup and can avoid downstream accidents.”

PSIM solutions are becoming mandatory among certain large organizations, including airports, notes Colleen. While some organizations may opt to create the platforms themselves, others may turn to systems integrators. Cisco, with its strong information technology channel programs, is seeing interest from channel partners that specialize in specific industries wanting to develop applications tailored for those industries, Colleen says.

As software increasingly becomes de-coupled from the equipment that it controls, another option that can enhance and simplify system control for the end user is to use software-as-a-service. This option eliminates the need for end users to install and manage their own software, instead enabling them to use a browser interface to interact with software managed by a third-party provider. Instead of an up-front charge, end users typically pay a monthly fee for the service, which requires a wide area data connection.

Sophisticated dashboard functions, such as single-click arming and disarming, are key to making software-as-a-service easy for customers to use, explains Mike Simon, president and owner of Connected Technologies, a Crystal Lake, Ill.-based provider of Connect ONE security software, which is offered as a monthly service. Customers also avoid conflicts with their information technology department because there is no need to worry about firewalls or virtual private networks.

Another advantage of this approach is that it can enable a single software interface to control security systems at multiple locations, notes Simon. “Our servers connect to all locations,” he explains. “If you want to arm or disarm all of your locations, you can do it across the board with one log-in.”