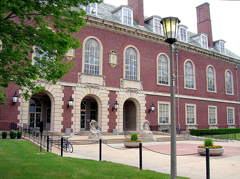 UIUC’s main library houses the majority of the University’s 11 million books â€”  making it the largest collection in the country.

Milestone Systems, an open platform company in IP video management software and Axis Gold Application Development Partner, is the solution of choice for the at Urbana-Champaign for central control and local access with flexible integration options over time as the security system is rolled out across campus.

The campus is frequented by approximately 53,000 students, staff and visitors on a daily basis; is home to 11 million books, the largest public university library collection in the country; has 14 major sporting facilities, 17 colleges and instructional units; and employs 11 Nobel laureates and 18 Pulitzer Prize winners as part of its faculty.

It faces everyday issues such as thefts on and around campus, including stolen laptops inside the university’s libraries, as well as other stolen items elsewhere. With more than 400 main facilities on campus, the 55-member police department has a lot of ground to cover. Public safety officials were looking for a way to provide real-time, reliable security information to police while saving money, which meant consolidating smaller, autonomous analog systems that dotted the campus.

“One detective had so many software programs running on his computer to manage all the different video systems that his computer wouldn’t work,” said detective Tim Hetrick of the division.

“If security is decentralized on a major university then police cannot use that system to its maximum capacity,” police chief Barbara O’Connor said. “We have developed a policy where anyone on campus purchasing a camera system must have it approved by the chief of police.”

The solution was a gradual, three- to five-year deployment of approximately 4,500 cameras that would be managed in a central location using a single video management platform â€” Milestone XProtect™ Corporate.

Like many universities, determining the need and making the decision to install a surveillance system is left to the individual department, whether it’s the Housing Administration, or a campus research laboratory. While the department heads have the final word over the purchase, technical specialists led by detective Hetrick from the university police, along with system integrator Current Technologies Corp. of , now provide assessments and equipment recommendations.

All new installations will be managed by Milestone XProtect Corporate, an IP-based video software system that centralizes the surveillance system management into a single, easy-to-use solution. Because the software is capable of integrating with more than 80 different video surveillance vendors, individual departments can select head end equipment that fits their needs and budget, without worrying about integration issues with the Milestone software.

Because of Milestone Systems’ open platform, police are moving forward with testing the integration of the system with door access control. Using Andover Controls software and integration services through Schneider Electric, the interoperable solution was running at a test site at the police department as of August 2010.

In all, about 10 departments have already completed their surveillance camera installations, including organizations like the . Three other indoor recreational facilities and a host of outdoor sports fields have been completed, and about 30 additional departments are in the process of deploying IP cameras and other equipment. The vast majority of network cameras are provided by Axis Communications. The projects underway now range anywhere from six cameras to about 70 cameras in size and feature a mix of fixed, megapixel and pan-tilt-zoom cameras.

Each department at the of at retains the ability to monitor its own video, although chief O’Connor’s policy is that video is also fed directly to the police dispatch center over the campus’ fiber backbone, where on-duty dispatchers can view live video or access archived events. Administration rights are also centralized at the dispatch center.

Pilot at Arizona State Univ. Validates Use of Secure Credentials on NFC Smartphones

Rapid Response to Expand West with New VP of Operations