How do you keep a building open and accessible to the public while ensuring that the employees who work there feel safe and secure? Today’s hyper-vigilance on all things security makes this a common, but difficult, balancing act faced by those tasked to define and implement such solutions.

The city of Spokane Valley’s new City Hall in Washington state was designed with just that challenge in mind. The building’s tightly integrated video surveillance, access control and intrusion systems, specified by Coffman Engineers and configured and installed by EVCO Sound and Electronics, make use of technology to simplify security operations while delivering on security needs.

“We needed a solution that didn’t just secure the building for employees; we also had to allow public access with a complex schedule of hours of operation, including spur of the moment changes,” said EVCO’s president, Kevin Bauer.

Spokane Valley’s information technology specialist, Greg Bingaman (“Bing” to those who know him), oversaw the project and played a key role in defining how the system needed to perform. “We wanted to make sure we had a good, safe environment. The ability to control access in and out of the building was our main focus, while keeping it easy for our employees.”

From an administrative standpoint, the top “must-haves” were a single, unified video management and access control platform, as well as Active Directory integration. “Instead of having two disparate systems that don’t talk to each other, it makes more sense to have a ‘single pane of glass,’” Bing said. “We also wanted to make it easy for our HR department to assign employee badges with the right user group credentials without reinventing the wheel, and Active Directory integration does that.”

To meet Bing’s requirements, Ben Helms, the specifying engineer on the project, recommended an integrated Valerus video management and VAX access control system, both manufactured by Vicon. “It’s a completely browser-based system, and that adds a lot of advantages over a hard system,” he explained. “Plus, with the built-in, free integration between Valerus and VAX, it made sense to go in that direction.”

Jason Weidman, IT manager at EVCO, led the installation team. The Valerus system now manages approximately 32 cameras throughout the interior and exterior of the property, which communicate across a dedicated switch and VLAN. All are hardwired. The access control system is on a separate subnet, with its own switch and VLAN. Each system requires a single application server to manage its respective software. Both the VMS and access control interfaces are Web-based and require no additional software installation in order to provide user access to the IT team responsible for managing them.

“We really like the fact that it’s a Web-based interface that allows us to administer things remotely,” Bing said. “For example, during construction, we had some contractors that needed to get into the building on a Saturday, and the access card we had given them wasn’t configured properly. We were able to log into the system from home, make changes to their card, and they were able to get right in.”

With the integrated interface, Bing said that mapping cameras to doors was easy enough for his own in-house team to handle. “With the correlation, we have that ‘single pane of glass’ that helps with investigations. When we look to see when a badge was used to come through a door, we can also immediately see if the person who used the badge is actually associated with it.” 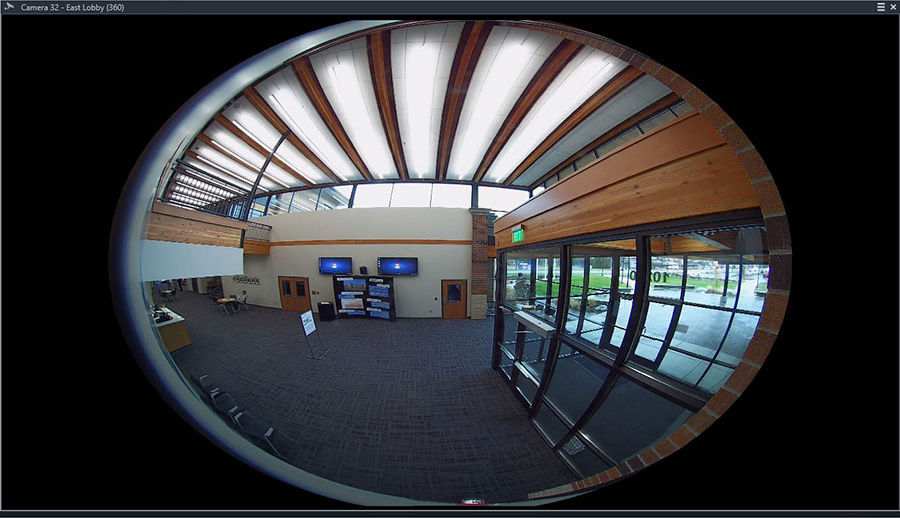 Spokane Valley’s information technology specialist, Greg Bingaman, is particularly fond of the view from one camera in the system — a Vicon 12 MP fisheye camera mounted vertically in the three-story lobby.

Bing is particularly fond of the view from one camera in the system — a Vicon 12 MP fisheye camera mounted vertically in the three-story lobby. “I can see a sweeping view of the whole facility. My colleagues were surprised by its capabilities. We can fly down into it and zoom around. It’s my favorite camera in the whole installation.”

The city’s IT staff worked with EVCO to set up automated functionality for the VAX system. The lobby of the three-story building is open to the public daily, 8 a.m. to 5 p.m., along with open access to the city council chambers, elevators and restrooms located on the first floor.

Most offices are on the second and third floors, and all are enclosed within suites that require an access card to enter, making it necessary for visitors to be buzzed or escorted in. The elevators, while open to the public, limit basement access only to card holders. The elevators also require a card to access upper floors after business hours.

Much thought was put into developing an emergency response plan, including the ability to initiate a lock-down from various locations in the building, Bing said. In a lock-down, all doors and almost all badges are immediately disabled, making it impossible for an intruder to take an employee’s badge and proceed further into the building. “Even if a dangerous person got behind one set of doors, by locking the remaining doors, we minimize the threat vector. We had to make a compromise between security and availability, keeping the building accessible for the public.”

The building’s burglar alarm, a Bosch Security system, is integrated with the access control platform. The last employee leaving the building after hours has the ability to lock up and arm the system using his or her access card. Similarly, the first employee arriving in the morning automatically deactivates the system. The same goes for employees authorized to access the building on weekends and holidays.

While Bing’s priority was an integrated system that optimized his team’s efficiency, EVCO was equally concerned with ease of installation, configuration and set up. They were able to minimize on-site installation time by handling much of the system configuration beforehand. Weidman said, “We set up a router and a couple of switches in our office that mimicked what was prepared at the new building. The IT department assigned us a couple of static IP blocks for both the Valerus and VAX systems, and we used that information to set up and assign devices in our temporary network.”

Installation was also simplified due to the design of VAX’s hardware. “I think what worked out very well was that in the majority of cases within the building, the access control module is actually mounted right over the door, so that really reduced our installation time and wiring time. It also makes it easier to service,” Bauer added.