From longstanding VCR tapes to network-connected solutions to the cloud, storage always has been a primary component of any video surveillance deployments. As technologies continue to change, so too do the approaches security integrators use when working within this space.

The main factors that are driving storage needs and technology advances could be called the “big three,” with video quality — not surprisingly — leading the way, given the ongoing resolution race that has gripped the industry for several years.

“A couple years ago, the average was 720p, then it was 1080p, and now three- to five-megapixel cameras have a bigger share of the market,” says Brandon Reich, senior director, surveillance solutions, Pivot3, Austin, Texas. “Naturally, more cameras generate more data.”

The second of these factors is retention periods, which also have been on the uptick recently.

“End users are storing and retaining video longer than in the past. Some of that is driven by internal policies or regulatory compliance, but they’re also using video for business intelligence and business continuity,” Reich says.

Which leads us to the final driving factor: the number of expanded applications for video beyond security.

‘As an industry,
we have to be open more to the possibility of alternative purchasing models, such as leasing or consumption-based, meaning you pay for what you’re using, which are more common in the IT world.’
— Brandon Reich,
Pivot3

One additional component of video surveillance that directly impacts each of the first three and is driving storage requirements higher and higher is camera count, which is increasing over time with a trend toward greater overage, says Brian Carle, director of product strategy, Salient Systems, Austin, Texas.

“A camera that’s already there won’t likely be removed, but it may be replaced,” he says. “As budgets allow, organizations add cameras to increase coverage.”

Falling prices have made storage more cost effective and accessible to greater numbers and a wider variety of customers.

“Storage is becoming less of a factor in the decision to increase the quality of video and resolution and area of coverage,” Carle says. “Hard-drive costs are down considerably with 10- to 12-terabyte drives on the market. Storage density is increasing while storage costs are decreasing.”

Customers generally know what they want in terms of number and placement of cameras, video resolution and recording duration, and whether to trigger on motion or events, or record continuously, but don’t generally think of storage, says Brian Mallari, director of product marketing – surveillance and enterprise, WD, San Jose, Calif. That consideration — and the education around storage — falls to security professionals. 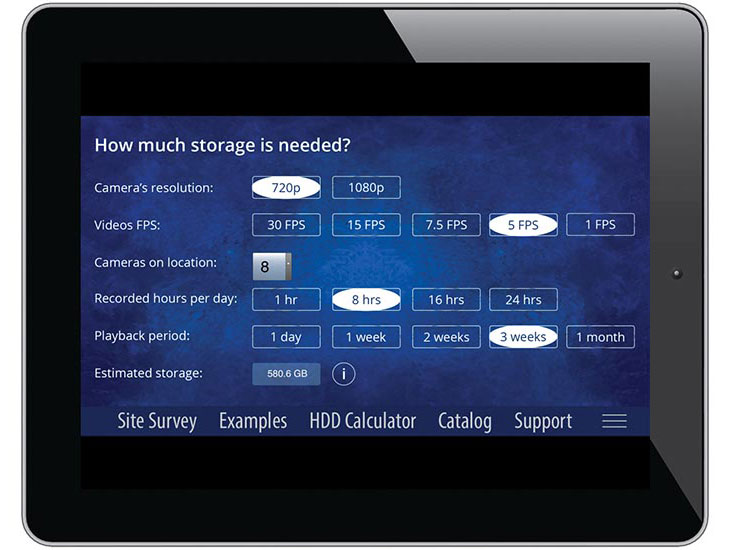 Most vendors like SecurityTronix provide integrators with input and tools to help them determine the appropriate storage solutions for each video surveillance installation. Photo courtesy of SecurityTronix

“Integrators and installers play a big role in educating end users about how their video surveillance wish-lists and requirements impact their storage investment,” he says. “At the end of the day, end users have increased their storage needs by virtue of the improvement in the sophistication and scale of their surveillance needs.”

One thing to keep in mind is that all drives are not created equally.

“Installers and security dealers face less reliability and support cases when they use the right drive for the right application. Hard drives are not all designed the same and have vastly different performance and reliability specs,” Burton explains.

Case in point is RAID technology, which is generally viewed as “good enough” for surveillance applications. While that may have been true in the past, there is some skepticism in the industry that these types of drives are really best for surveillance, especially given the increasing capacities of hard drives.

“The reality is that RAID was never designed to scale to the level we use it for now,” Reich says. “We have 10TB hard drives today, and in a few months you’ll see 12TB hard drives. By a factor of dozens, that’s way beyond what RAID was developed to protect against. You can run into problems when you use RAID on these high-capacity drives.”

The sheer amount of data generated by today’s video surveillance and other systems can be staggering, which can increase storage requirements to the point where budgets become stressed. The primary way for integrators to make data more manageable — and by extension more cost-effective — is to employ advanced compression algorithms.

Another strategy for reducing storage needs could be to selectively offload older video to backup servers and solutions for archiving purposes.

“The thinking is that activity marked by analytics or associated with an event from the access control is theoretically the most relevant that end users will want to refer back to in the future,” Carle says.

As video deployments, particularly enterprise solutions and other larger deployments, move more to the IT infrastructure, IT departments are increasingly taking ownership of those systems. 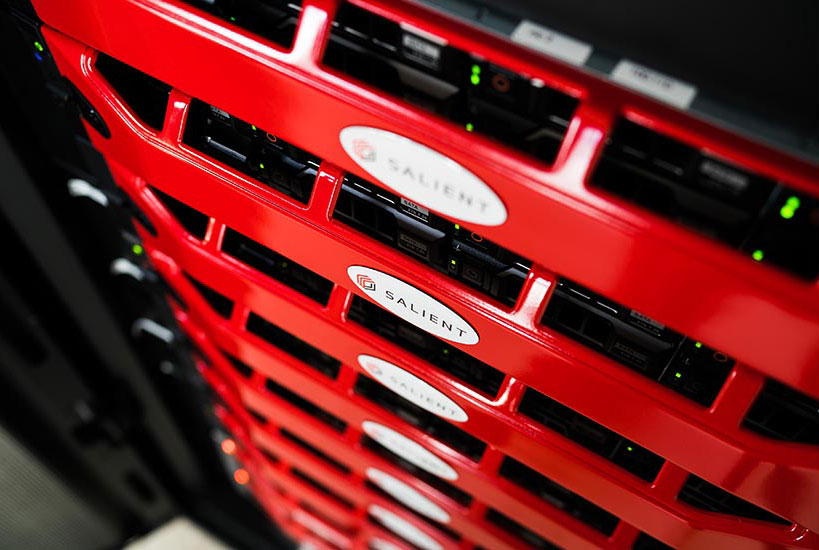 It is important to select robust, high-performance solutions that are purpose-built to meet the demands of video, which can easily overwhelm standard hard drives, which are simply not up to the task. Photo courtesy of Salient Systems

“Surveillance, data security and IT personnel are finding it best to converge into one unified organization, and IT infrastructure planning absolutely needs to consider the impact and bandwidth needs of surveillance components,” Mallari says. “So integrators should at minimum learn to understand and determine the bandwidth considerations and impact of a particular surveillance installation, and then work collaboratively with the IT experts to size the right IT infrastructure to accommodate the bandwidth requirements, with room to spare.

IT personnel and departments have very different expectations for reliability, virtualization and other factors than traditional physical security practitioners may be used to providing, Reich says.

“System downtime and data loss — those are the things that keep IT departments up at night. They expect to eliminate them. But in the video world, those have been taken for granted. Sometimes systems go down and we lose data, but there’s not much we can do about it. In order to be successful, we have to follow the trends of IT,” he believes.

‘Even though 4K
compliant video requires 7.5 times the storage space of 1080p video, the latest compression technology can improve this to about six times.’
— Brian Mallari, WD

The first step in ensuring a good working relationship with IT is to call on manufacturers early in the process.

“Get your manufacturer’s site survey form and fill it out so your manufacturer can provide you with a complete bill of materials of all your IT system needs up front,” says Aaron Starr, CEO, North American Cable, West Chester, Pa. “Ensure that same manufacturer will give you after-sales support to complete your install end-to-end.”

Most manufacturers are more than willing to get on board with providing professional services to integrators to help make sure systems are IT-friendly, often at no cost.

While the amount of data generated by video surveillance and other systems is up, as is end-users’ expectation of little or no downtime, a main challenge for integrators is that simultaneously, budgets tend to be fairly consistent. The solution is to think creatively, Reich says.

“It’s important for integrators to look for solutions that can deliver the kind of end user-expected uptime, data protection and virtualization without the need for redundant hardware or extra software and licensing that’s traditionally relied on in the security space,” he says. “As an industry, we have to be open more to the possibility of alternative purchasing models, such as leasing or consumption-based, meaning you pay for what you’re using, which are more common in the IT world.”

If you’re not convinced of the opportunity storage provides for security integrators, consider the statistics about the growth rates of surveillance technologies, Reich says.

“The overall surveillance market is growing at 8 or 9 percent a year, and camera volume is around 14 percent a year. Video storage overall is at 16 percent, but the top half of the market, what we would call the enterprise, is 26 to 27 percent a year — three times the growth of the broader video surveillance market,” he says. “In terms of storage capacity sold and shipped, the growth rate is even faster, around 42 or 43 percent,” he describes. “There are great business opportunities for systems integrators who otherwise might not necessarily put in the time, effort and resources.”

Back to the Future

While the cloud has been touted as the future of storage, bandwidth considerations are still preventing that technology from reaching its full potential. On the other hand, there remain viable use cases for what is likely perceived as an ancient recording technology: tape.

“Regulatory requirements, most notably in the marijuana industry, demand ultra-high volumes of storage more frequently than the industry has seen in the past,” says Brian Carle of Salient Systems. “This trend has the effect of bringing alternative storage technologies into the fold more frequently, such as tape systems when viable. Given budget considerations, although it’s not a new technology, it may become more relevant in the future.”

For more on video storage, visit the following articles:

Pushing AI Into the Spotlight

The More Things Change With Storage, the More They Stay the Same

3 Tips for Success With Unified Solutions