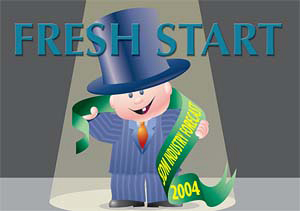 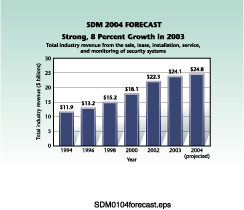 Total industry revenue from the sale, lease, installation, service, and monitoring of electronic security systems improved by a healthy 8.2 percent in 2003, to $24.1 billion.
These days, it's dangerous to use high-flying superlatives to describe business growth. For those economics big-wigs in Washington and on Wall Street, they like the term "cautious optimism."

So, that while the annual SDM Forecast Study for 2004 finds security dealers, installers and systems integrators cautiously optimistic about how things will turn out by the end of this year, most report pretty darn good performance last year, throwing caution to the wind.

Total industry revenue driven through that dealer, installer, integrator base jumped more than 8 percent (8.2 percent) from 2002 to 2003, according to the survey, mailed to a random sample of SDM subscribers.

Analysis of the survey results, comments from respondents and follow-up interviews point to a handful of success factors. 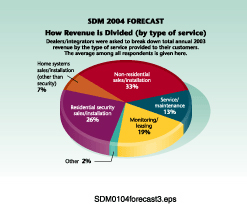 Sale and installation of equipment continues as the source of a majority of revenue. Worth noting is that revenue from non-residential sales/installation gained 5 percentage points between 2002 and 2003.

The economy and then crime, without a doubt, will continue to most significantly impact sales this year, according to the dealers, installers and integrators responding to the SDM Forecast. There is an increased feeling that capital spending by business as well as non-residential building activity will be more important factors this year. Only time will tell; there's a glimmer of confirmation coming from productivity, confidence, technology and business purchasing measures by the Federal government. Independent sources show that capital spending is growing, with non-residential business activity more selectively growing in certain types of businesses and geography regions.

More dealers plan to take a micro view of potential business this year, saying they will focus more on the mom-and-pop small commercial sector and the high-end residential customer.

Since the SDM Forecast first started in 1982, top challenges remain the same, although the order of the top four challenges shifts slightly each year. Top challenges: increasing sales, protecting profit margins, controlling costs and finding/retaining employees. Not surprising, employee challenges were ranked less important than controlling costs in 2003, thanks in some measure to more people available in the labor pool.

The security industry, overall, defines its size based on the SDM Forecast, and details of the annual survey can often help individual security firms fashion strategies or refine missions and plans. 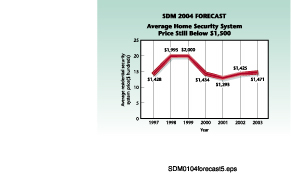 There is slow growth in the average price of a residential security system, after a drop from 1999 to 2000.

The survey details, for example, show how competitor players have changed over the last few years. Almost half of firms (47 percent) see the stiffest competition coming from the large or national alarm companies, reflecting the outcome of a decade-or-more of consolidation. Ironically, hardly any respondents (1 percent) see telephone companies as alarm competitors anymore. Neighbors of alarm firms, those small or local alarm companies, continue to be a natural competitor, while 16 percent of respondents believe that competition â€“ no matter the source â€“ has little or no effect on their business.

It's also obvious from the survey results and news reports that the purchasing of security-installing companies has slowed significantly. Only 6 percent report they have made such purchases during the 12 months previous to the survey. In some years during the 1990s, for example, more than 10 percent said they purchased another security-installing company.

The independent nature of the industry still remains, however. In terms of belonging to an authorized dealer program, half of SDM Forecast survey respondents do not belong. Still two in 10 (20 percent) say they belong to three or more of such programs.

Monthly home monitoring fees, the meat to product sales potatoes, remain static on average, with the average monthly fee pegged at $22.80, although 30 percent of dealers who monitor report billing higher than the average. About two in 10 (21 percent) expect that the price of monitoring will increase this year. That's less than the number of respondents who expect the price of an average home installation to increase.

The survey also measures the important element of turnover of customers.

Last year, for instance, surveyed dealers say they lost, on average, 59 customers, with about one-fourth reporting that the number of lost customers increased as compared to 2002. Still, on average, dealers say they sold 150 monitoring contracts last year, with about one-fourth saying the number of monitoring contracts sold in 2003 increased compared to 2002.

Dealers who provided additional comments when completing their SDM Forecast Survey questionnaires suggest that the growing popularity of the Internet will drive even more interest in remote video monitoring services.

Striking a somewhat inconsistent note, almost half of dealers (48 percent) say they do not have a Web site. Most every firm, however, does use the Internet for business purposes, with research, location of manufacturers and distributors, and obtaining of technical/product information the most often cited reasons to go online.

Who Took the Survey?

Results of the SDM Forecast Study 2004 are based on valid responses from a mail-out, mail-in survey to a random sample of SDM subscribers who are dealers, installers and system integrators. A mailing to 2,000 subscribers was conducted in mid-October 2003, with a useful response rate of 15 percent.

Sidebar: Devilish Delight in the Details

Respondents to the SDM Forecast Study 2004 have some good advice to colleagues, in addition to the survey results.

The stiffest competition? They are the buyers who select incompetent companies to do business with.

While selling more at a higher margin is obviously a shared goal of all dealers, many see home building and a closer relationship with home builders as a key element to meet that goal this year.

A significant minority of dealers gets revenue from outside the traditional security and life safety mission. These revenue streams include computer services, contract labor, electrical work, telephone systems, home office needs and even garage storage systems.