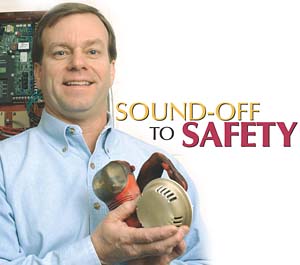 On March 29, 2004, a fire inspector for the city of Evanston, Ill., asked a resident of a condominium building who had a television on in his unit if he could hear the new fire alarm sounding in the hallway. The resident asked, â€œWhat alarm?â€

Only seven months later, around 4 p.m. Sunday, Oct. 17, 2004, a fire broke out in the building. All residents were evacuated without incident, even those elderly or disabled, because Norshore Alarm Co. Inc., Libertyville, Ill., had placed horn strobes inside every unit in the building near their front doors.

This installation has earned Norshore Alarm Co. the First Line of Defense award, which is co-sponsored by SDM magazine and the National Burglar and Fire Alarm Association (NBFAA), Silver Spring, Md.

After his March visit, the fire inspector required the horn strobes in each unit. Norshore already had upgraded the system from only fire alarms at the end of each hallway to horn strobes at the ends of the halls and smoke detectors in the middle.

The horn strobes were added by Norshore in each unit the week of May 5, 2004, and the second inspection on June 1 was satisfactory. 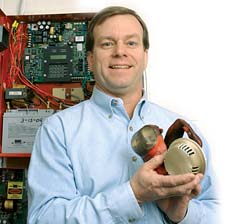 The First Line of Defense award recognizes and publicizes the effectiveness of electronic security and life safety systems. In its seventh year, the award honors dealers, central stations and emergency authorities that have demonstrated outstanding performance in deterring, detecting or preventing crime and/or loss through the effective design, use and response to security and fire alarm systems. The award is co-sponsored by SDM magazine and the National Burglar and Fire Alarm Association (NBFAA), Silver Spring, Md.

This decision to add horn strobes in each unit proved crucial that Sunday in October when something fell in one of the residentsâ€™ halogen lamps and set her unit on fire.

â€œIt was one of the older styles of halogen torchiere lamps, and then the books on shelves near it caught fire, and thick smoke began pouring through the unit,â€ described resident and condominium board member Dan Palmer.

The owner of the unit tried to extinguish the blaze with a fire extinguisher, but the extinguisher was too small, Palmer related. The smoke detectors in the hallway set off the fire alarm, and residents, after smelling the smoke and determining it was no false alarm, began to evacuate, Palmer reported.

One of the residents across the hall from the burning unit is physically disabled and was carried down a ladder by responding firemen. Two elderly women who use walkers received assistance from their neighbors during the evacuation, and a third from her nurse.

Fire departments from the adjoining suburbs of Morton Grove, Skokie, Wilmette, Glenview and Northfield responded to the blaze.

The only injury was treatment of the owner of the condominium unit for smoke inhalation at the hospital a block behind her building, Palmer noted.

The unit in which the fire started was gutted by firemen and its three windows and one sliding door knocked out. Another window in a nearby unit was broken to provide emergency access.

Doors that were locked were broken down to ensure no residents were trapped. Most of the residents, except the owner of the unit where the fire started, were back in the building the night of the fire. Water damage required replacement of hallway carpeting and repainting was necessary because of smoke damage.

The 29-unit, five-story condominium was built in 1963 with steel, concrete, wood and masonry construction. Among its residents are retired people, younger owners who are moving in and students from nearby universities who rent units from individual owners.

At the central station that Norshore uses, Infinity Monitoring Services Inc., Elk Grove Village, Ill., the fire alarm signal was accessed by the software within one second of receiving it, maintains Ken Hohs, Norshoreâ€™s owner. Dispatcher Brenda Rogers then followed the instructions on the account, which is to telephone the Evanston Fire Department.

â€œThe dispatch center in Evanston was also getting phone calls from residents in the building,â€ Hohs reports.

â€œThe central station did an excellent job â€“ the alarms came in at 4:19:24 p.m. and they accessed it one second later, which is just unbelievable, and within a minute had called the fire department,â€ Hohs relates. â€œThe key is that you couldnâ€™t react any faster than they did. That is the backbone of our business â€“ if the central station is failing, weâ€™re failing also.

â€œWe just had another fire in an historic 100-year-old golf clubhouse,â€ Hohs continues. â€œSomebody had started something in a commercial dryer at the end of the day and left the building unoccupied. It caught on fire and tripped the smoke detectors, and Infinity had it dispatched in 40 seconds!â€

Ken Hohs (in foreground), owner of Norshore Alarm Co. Inc., Libertyville, Ill., presents the new horn strobe lead installer Brad Buthman will use to replace the one in a condominium hallway in Evanston, Ill., that was damaged by fire (left).

The new system Norshore installed in March before the fire is a Detection Systems DS9400M fire alarm control panel. Wired smoke detectors are in all hallways and at the tops of the stairwells and in utility areas on the first floor.

A manual fire alarm pull station and one horn strobe is at each end of the hallways per floor in addition to the new horn strobes added inside each unit by their front doors.

After the fire, a call for service went out to Norshore. â€œWe got a call the same night of the fire that they needed some emergency service because their alarm was in trouble and wouldnâ€™t clear,â€ Hohs relates. â€œOur on-call serviceman went on the site and found some damage from the fire to a couple of the detectors.â€

The problem was solved so the system would clear and it remained operational, he notes. â€œWe also had a phone call from the residents on operation of the system,â€ he adds.

The original local-only system Norshore replaced was estimated to have been 20 years old. New SpectrAlert selectable output horn strobes from System Sensor replaced the old horns and new wiring was run inside the existing conduit. Wire molding conduit or raceways were added for the horn strobes in each unit.

â€œEvanston has been going to all condos and apartment buildings and telling owners they need to put in or upgrade their fire alarms,â€ Hohs relates. â€œThe question of horns or sounders in every unit is always a big issue. Itâ€™s not unusual for a fire inspector to make sure alarms are heard in every unit.

â€œIâ€™ve had fire inspectors turn on water in bathrooms and set their decibel meters to see if there is enough sound, or if youâ€™re sleeping, whether thereâ€™s ample sound in the bedroom,â€ he relates. â€œIf a fire is detected but you canâ€™t hear the alarm, itâ€™s not going to do you much good.â€

Hohs started working for Norshore in 1976 after graduating from high school. â€œThe business was started by an Evanston policeman who was the neighbor of my uncle,â€ Hohs remembers. â€œI was the first employee.â€ He worked summers and Christmas while attending college. After his junior year in college, he began working full-time for Norshore.

In 1982, the policeman left the business and sold it to Hohs and his wife, Elaine. They operated it first out of their spare bedroom, then out of a small office in Glenview, Ill. Later, they moved to a larger office in Glenview, and finally in 1993 moved to the companyâ€™s current location in Libertyville, Ill.

Hohs is a member of the National Burglar and Fire Alarm Association (NBFAA), and a past president of the Illinois Electronic Security Association (IESA). He and his wife remain active IESA members.

The family-owned business now has 15 employees. â€œMy wife Elaine and I run the business, and we have a very hands-on approach,â€ Hohs asserts. â€œI know whatâ€™s going on with all the installations. Customers are encouraged to talk to me about problems or issues.â€

â€œCustom residential is the backbone and always has been of our business,â€ he declares. Hohs estimates his average residential system probably costs homeowners in the range of $2,500.

â€œProbably the one thing we specialize in is custom residential security systems,â€ Hohs notes. â€œBeing in the north suburbs of Chicago, I would say high-end. We donâ€™t compete with the giveaway $99 systems â€“ we just donâ€™t do those. My adage is that weâ€™re in the alarm business, not in the contract-selling business. Our business philosophy has always been that we only do projects at a fair price for a quality product.â€

Sidebar:You Could Earn the First Line of Defense Award

Has your security dealership averted a dramatic loss through use of systems it installed? Tell us about it and qualify for next yearâ€™s First Line of Defense award, which is co-sponsored by SDM magazine and the National Burglar and Fire Alarm Association (NBFAA), Silver Spring, Md.

Established in 1999, this award recognizes the tangible values and rewards security and fire systems bring to communities and the nation. It honors the teamwork among security installing companies, central stations and emergency authorities in protecting customers and communities.

Winning companies must be NBFAA members in good standing. To apply for membership in the NBFAA, visit the Web site www.alarm.org or call (301) 585-1855.

SDM magazine and the NBFAA now are accepting entries for next yearâ€™s First Line of Defense award. Eligibility of an event is for two years from Oct. 30, 2003, to Oct. 30, 2005.