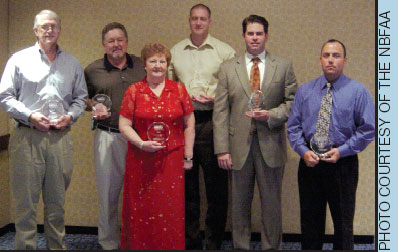 (From left) Kile Unterzuber of the North Carolina Burglar and Fire Alarm Association (NCBFAA) was named Instructor of the Year for the National Training School (NTS).

Carol McLester of the North Carolina Burglar and Fire Alarm Association was named CSA Executive Director of the Year.

Michael Harrison, dealer director, accepted the Associate Member of the Year award on behalf of the Alarm Debt Liquidation Group.

Leon Love, president of the Alabama Alarm Association (AAA), accepted the award for the CSA Newsletter of the Year.

Not present was Frank Campbell of the Georgia Burglar and Fire Alarm Association (GBFAA), who received the NTS Training Coordinator of the Year Award.