The Iron Is Hot 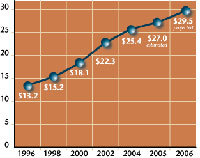 Once the home security market began to develop in the 1970s, many alarm companies built their businesses around a model that encompassed a little bit of everything. Hang a shingle, hire an installer, sell a home alarm system one day, a camera system at a convenience store the next. Whatever the customer needed, the tech-savvy dealer would learn it and then install it. 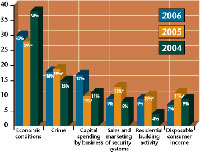 Economy, Spending and Crime Expected to Have Most Impact on Sales This Year

*Percentage of respondents indicating each favor
This local security generalist, over the past three decades, has gradually begun to evolve into a vertical market specialist â€“ or at least a dealer which targets almost exclusively either residential or non-residential. SDMâ€™s Industry Forecast Study, conducted annually since 1981, expresses this trend. The Forecast, its results presented here, measures prior-year sales activity, revenues, business challenges, market opportunities, and other factors, and projects current-year revenues and other trends. 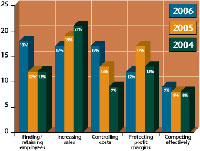 As Business Heads up, So Do Hiring Challenges and Containing Costs 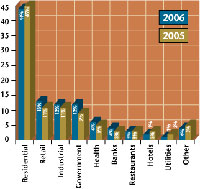 *Percentage of respondents indicating the one market sector where they expect the highest rate of growth for their companies in 2006
The factors shaping this change in the electronic security industry have been present for many years â€“ including manufacturer consolidation and the development of integrated security systems, the construction market and custom home amenities, the need for corporate decision-makers to have one point of accountability, a dealerâ€™s operational efficiencies, and more. The study suggests that this trend netted a successful strategy, particularly in 2005.

How Dealers and Integrators Will Spend on Equipment in 2006.

Percentage of respondents citing each range of spending change in 2006 compared with 2005
SDMâ€™s Industry Forecast Study proved that total industry revenues grew 6.2 percent to $27 billion in 2005. In order to calculate this figure, survey respondents were asked to state their companyâ€™s revenue from the sale, lease, installation, service, and monitoring of security systems, including alarms, access control, video surveillance, life-safety, home systems, and related low-voltage systems. Respondentsâ€™ answers are then projected for the industry, based on representative unit counts of various-sized companies.

Dealers and integrators across the board project 2006 revenue to increase at an even better rate â€“ 9.3 percent â€“ to reach $29.5 billion, according to the study.

SDMâ€™s Industry Forecast Study measures the average sold price for two types of residential security systems â€“ traditional and mass-market. For traditional systems, the average surged to $1,645 in 2005. The pricing on mass-market systems also jumped, to $1,169 on average.
The lionâ€™s share of revenue â€“ segmented by type of business â€“ comes from sales and installation. The percentage of revenue from non-residential sales/installation grew slightly in 2005, while the percentage from residential sales and installation decreased slightly. Industry-wide, both residential and non-residential monitoring services account for about 19 percent of a dealersâ€™ total annual revenue â€“ a figure that remained constant in 2005. 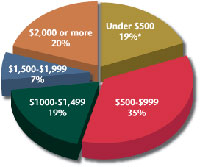 *Percentage of respondents falling into each price range
Although indicators show that 2006 will be a fruitful year for security-installation firms, growth wonâ€™t come without difficulty. Challenges to growth, dealers say, will be finding and retaining employees â€“ a continual battle that comes to the forefront this year as the demand for high-level skills increases with todayâ€™s complex technologies. Protecting profit margins, which in last yearâ€™s study was the second-highest challenge dealers and integrators faced, now ranks fourth in SDMâ€™s Industry Forecast list of challenges. 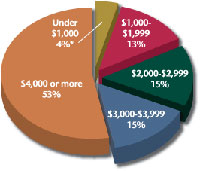 *Percentage of respondents falling into each price range
Although various factors continue to eat away at profits, such as rising fuel prices and the need for more skilled labor, perhaps profits are less of a concern due to better pricing in the market. The study reveals that average residential installation prices jumped more than $250 last year to an average of $1,645 for a â€œtraditional systemâ€ and surged more than $500 to an average of $1,169 for a â€œmass-marketâ€ type of system. Not only are fewer installations falling into the mass-market category, but the trend to integrate and add subsystems to a basic alarm installation is having a positive effect by returning some much-needed profit into the residential installation business. The average monthly monitoring rate for a residential system has remained at $23 for several years. 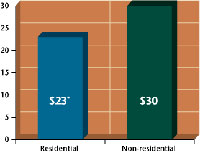 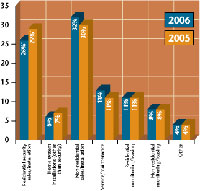 Non-residential Sales/Installation Takes a Bigger Share of the Pie

*Respondentsâ€™ average percentage of revenue per service category
Keeping prices from slipping will be factors such as the strength of the economy, crime rates, and the amount of capital spending by business â€“ the top three factors survey respondents believe will have the most impact on sales in 2006. As well, it appears most growth in 2005 was organically grown. Only 3 percent of dealers were involved in purchasing another security-installing company, the lowest percentage of acquisitions ever recorded by the survey. 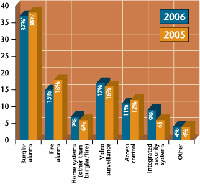 Integrated Security Systems Gains as a Percentage of Total Systems

*Respondentsâ€™ average percentage of revenue per system category
SDMâ€™s Forecast Study asked dealers to indicate how they expect their level of spending in 2006 to compare with 2005, across a broad range of product categories. For those who indicated their spending would increase, the survey asked, by how much? Where the greatest percentage of dealers and integrators estimate they will spend at least 20 percent more in 2006 is in the product categories of, not surprisingly, video surveillance and networking/communication equipment. 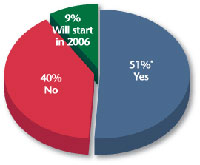 Does Your Company Have a Web Site?

How the Survey Was Conducted

The objective of SDMâ€™s Forecast study is to measure prior-year sales activity, revenues, business challenges, market opportunities, and other factors, and to project current-year revenues and trends. In early October 2005, SDM mailed a four-page questionnaire to a random sample of 1,750 of SDMâ€™s subscribers, with a $2 incentive to complete the survey. Respondents â€“ who have executive management titles in companies in the following types of businesses: security dealers, systems integrators, access control system specialists, security service companies, and engineered fire systems distributors â€“ mailed back their completed questionnaires to SDM by early November, and results were tabulated on a 13 percent response rate.