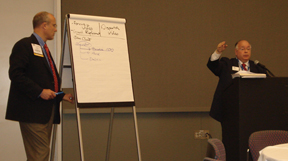 A meeting of the Electronic Security Association’s Video Technology Interest Group, held last week during ESX in Pittsburgh, revealed that large investments are being made in video surveillance technology by city and county governments, much of which is being funded by federal government.

The goal of the interest group, said co-chair Keith Jentoft (pictured on left), president, RSI Video Technologies, is to bring video revenue to ESA members. One of the initiatives of the group is to examine how standards can help members achieve that goal. About 25 people attended the meeting.

John Chwat (pictured on right), ESA’s director of government relations, told the meeting’s attendees about a new case study being released by ESA. It involves Baltimore County, Md., where an ordinance passed into law two years ago mandated the installation and use of video surveillance equipment in county shopping center parking lots and is “now yielding substantial public safety results,” ESA reported.

“The Towson Mall, where a death occurred, spent more than $1 million to have video cameras installed not only in the parking lot, but in the mall as well,” Chwat told meeting attendees. He said that although the Chamber of Commerce opposed the Baltimore County ordinance, the county offered loans, guarantees and grants for businesses to comply with it. Since then, parks, schools and court buildings in Baltimore County also have had video surveillance systems installed or are considering such.

In an executive summary distributed at the interest group meeting, ESA said Baltimore County, Maryland, chief of police James Johnson was one of the earliest supporters of the ordinance. ESA undertook the writing of the case study “as a result of his urging the industry to support passage of similar ordinances around the country and to encourage public safety officials and elected representatives at state and local levels to require video surveillance as a crime prevention, anti-terrorist measure.”

The case study contains statistics that prove that the ordinance in Baltimore County has decreased crime, ESA said, and “it can be used as a guide for ESA members to advocate for support in their local county or city jurisdictions, increasing opportunities for acquisition, monitoring and maintenance of the systems.”

ESA is interested in working with its chapters to promulgate similar ordinances across the country.

Chwat also described another potential opportunity for members in the form of federal appropriations bills containing “earmarks” that specify certain funds be used for the procurement of security equipment â€” specifically, video surveillance.

“There are millions and millions of dollars in earmarks that are benefiting our industry,” Chwat emphasized. This is in addition to grants through the Department of Justice for law enforcement needs, he said.

Chwat encouraged dealers to get involved with their mayors and city councils to recommend security projects and request their assistance in lobbying federal legislators for these earmarks to be included in the next round of appropriations.

On the Cusp of the Future

Strive to Be Easier

As Editor of SDM, Laura Stepanek is responsible for the overall editorial direction of the magazine, its supplements, e-newsletters and website. She works with the SDM editorial staff to develop content that helps security dealers and systems integrators operate successful businesses. Laura represents SDM at trade shows and conferences, often presenting the results of exclusive research studies such as the SDM Industry Forecast. She writes and edits a variety of articles, and manages the annual SDM 100 and Top Systems Integrators reports. Laura joined SDM in 1984. She holds a bachelor’s degree in English from Barat College of DePaul University. Contact Laura with article ideas.

Live from Cowboys Stadium Its the ESA Leadership Award Winners