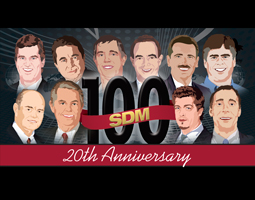 The story of the 100 largest security dealers and how they performed in 2009 can be told in a Twitter update of 140 characters or less: The SDM 100 is waging war on the economy and winning. RMR up 6 percent. Sales revenue down slightly. Profits up. www.sdmmag.com (Hope you will retweet.)

Now in its 20th year of publication, the SDM 100—a ranking by recurring monthly revenue (RMR) of the largest security dealer companies in the United States—continues to prove that security services are a necessity in America’s homes and businesses, and that clients are finding ways to fund both system sales and services. That proof is found in a solid 6 percent growth in RMR and 2 percent growth in total annual revenue in 2009 compared with 2008. While sales revenue totals were slightly off compared with the prior year, sales efforts were sufficient to cover losses from attrition and even build up RMR.

“We had 33 percent growth, so it was a great market for us in 2009,” claims No. 39-ranked Power Home Technologies, of Raleigh, N.C. “There is more awareness out there than ever before.”

No. 13 ranked Protect America Inc., Round Rock, Texas, reports that, “Demand for security was as strong as in prior years; however, it took more marketing and sales effort to reach the market and close sales.”

No. 1 ranked ADT reported 4 percent RMR growth. And while ADT’s parent early this year announced its intent to acquire No. 2 Broadview Security, the transaction had not been finalized at the time of this writing. Broadview Security is ranked separately based on its 2009 performance.

SDM 100 dealers earn their revenues from the sale, installation, service and monitoring of electronic security systems, such as intrusion and fire alarm, access control, video surveillance, and related low-voltage systems.

The SDM 100 does not measure profit performance; it measures revenue performance. However, dealers were asked to describe how the recession affected their profit in 2009. The results were not all positive. Many companies struggled; but a majority responded with good results, such as No. 11, ASG Security, which reported its best profit year on record. “However, the recession did put increased pressure on customer retention. More customers canceled for an inability to pay than in previous years,” it said.

Many companies agreed that debt collection was a strong negative last year. No. 59, Habitec Security, Toledo, Ohio, reports that while its profitability was exceptionally strong, “bad debt expense was slightly higher than in 2008 on ac-count of high unemployment and business failures in our geographic region.”

It seems those who prepared early were in the best position to weather the storm. “We were fortunate enough to improve our operating efficiencies early in the game, which allowed us to still perform well in a down economy,” reveals Nashville, Tenn.-based ADS Security, ranked No. 23. ADS improved its RMR from $1.69 million in 2008 to $1.78 million in 2009.

At Crime Prevention Security Systems, Gainesville, Fla., ranked No. 82, the company experienced an increase in profit margin despite a drop in gross sales. “The reason for this is we cut expenses to become more efficient while still providing excellent services. The recession forced us to think more critically about how we spend our time and money to increase efficiency and profitability,” the company says.

Whatever it took to get out into the market and own it, that’s what the SDM 100 did last year. The stronger markets, according to the dealers, were video surveillance, mass notification, fire alarm, “managed” access control, and personal emergency response systems (PERS). Some weak markets mentioned by the dealers were home systems integration and middle commercial due to “buildings going vacant” as businesses choked.

As in most years, SDM 100 leaders had mixed experiences on the performance of residential versus commercial. For some, residential was up, while commercial was flat. Other companies described the residential market as “non-existent” and said commercial business was very strong, in particular, the public sector.

“2009 was a mixed market,” comments No. 8 ranked Vector Security, with headquarters in Pittsburgh. “The severe decline in builder business at the close of 2008 [was] leveled out by second-quarter 2009. However, the market remained weak throughout the year. Residential business was very price-driven, with fewer larger systems and more smaller package-type installations. We did see an increase in residential video in 2009.”

Readers will note that the 2010 SDM 100 contains a substantial shift in rank for many companies. Not only was there change at the top—as the No. 6 and No. 7 companies switched places—but Westec Intelligent Surveillance entered the SDM 100 for the first time, landing at No. 24. In addition, both Safeguard Security and Communications and Sonitrol Security Systems of Hartford moved up six spots, and F.E. Moran Inc. moved up eight spots in the ranking. These changes contributed to many companies moving lower in rank, even though their RMR had increased.