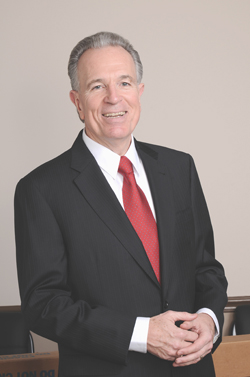 News of layoffs and joblessness have dominated headlines for so long, it is refreshing good news to learn of a growing company that is adding staff. Hiring is precisely what Electric Guard Dog, a Colombia, S.C., company is doing. In fact, it recently announced plans to triple its regional sales force.

Electric Guard Dog — a company that debuted last year on the SDM 100 at No. 29 with $1.3 million RMR (Dec. 2010) — actively serves 47 states, including Alaska and Hawaii and is strong and active in all 200 major metropolitan markets where population density and high crime rates go hand in hand.

A cross between electronic security provider and security integrator, installing electric fences that can integrate with other security devices, Electric Guard Dog is referred to by its customers as the “No. 1 Theft Deterrent Service in the U.S.,” according to chief executive officer Jack DeMao.

Customers such as trucking, auto auctions, auto dismantlers, metal recycling and rental firms rely on the layers of deterrence Electric Guard Dog offers. Originally started in 1973 as a company that provided canine security guards, Electric Guard Dog evolved into an electronic security company when the original owner had a break-in. In 1991, the founder developed an electrified fence for himself and the company became more viable as an electronic security business that continues to experience remarkable growth today.

The company reported a 25 percent growth rate in new orders during 2011 and projects incremental or year-over-year growth of 40 percent. DeMao says so far in 2012, projections are right on target.

DeMao estimates there are a million prospects that fit the company’s target customer profile. Because not all are in high-crime areas, the company suggests that even a 2 percent penetration rate would yield a business opportunity of 20,000 potential locations.

“We are currently at about 3,000 locations so we have the opportunity to grow this business, we think, seven times. When you keep making investments like we do, we have the potential to continue along this upward path. A key driver for our optimism about growth in this business is the huge potential for a deterrent service like ours. We don’t announce or record crime, we push the bad guys away,” DeMao explains. “People come to us for the deterrent value of our system. They call it the ‘do right’ fence,” he says.

Typically, his clients have already made all the basic investments in security including a perimeter fence, lighting and camera systems. The fence installed by Electric Guard Dog is 3 to 7 inches inside the existing perimeter fence. Its sheer size and the warning signs create a powerful deterrent.

“It’s really got three levels of deterrent. First is the visual. It’s 10 feet tall with big yellow signs that say, ‘Warning 7,000 Volts. Keep Out.’ Then, if a would-be thief still attempts to open up the perimeter fence and tries to come in, it will hit him with a safe, but memorable shock,” DeMao describes.

Electric Guard Dog fences are solar-powered, specifically designed so the power cannot be cut by thieves or interrupted by power outages. Additionally, the fence delivers an electronic pulse upon contact, rather than continuous power, to help ensure safety.

“Then there’s one final layer. If a crook attempts to spread the wires, or does something crazy like try to drive a truck through the fence, it would signal a noticeable drop in voltage and initiate an automatic call to our alarm monitoring company,” he adds.

DeMao says the company began investing heavily in the business in 2008 by increasing field service and support staff. Now it is in the process of interviewing candidates for sales positions recruiting in Boston, Philadelphia, Atlanta, Memphis, Chicago, Cincinnati, Columbus, Ohio, and Sacramento. Interest has been significant with some 2,000 applicants interested in seven sales positions. DeMao is in the final stages of interviewing potential candidates for the jobs. Those hired will begin a five-week training period to help Electric Guard Dog sustain its remarkable growth.