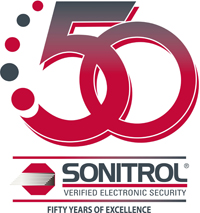 Sonitrol Corporation (Sonitrol), Fort Worth, Texas, the creator of verified electronic security for homes, schools and businesses, celebrated a 50-year milestone during its annual Sonitrol National Dealers Association (SNDA) Convention and Awards Banquet in late March.  Over 400 Sonitrol personnel from throughout North America attended the 2014 SNDA meetings, and during the four-day conference, Sonitrol franchise owners and personnel appointed new SNDA officers, and honored employees throughout the Sonitrol network for their achievements in the past year.

Among the newly appointed officers for 2014, Jeremy Bates, general manager, Sonitrol of Lexington, was elected the new SNDA president. Sonitrol employees remarked that this year’s convention held some extra importance to them. “As much as this year’s agenda at the convention was business, as usual, it was a little bit different, a little more special,” said Bill McNabney, founder of Sonitrol University, where its salespeople are trained, who was honored as the company’s first ever and longest-tenured employee.  “We were all able to recognize our history, our achievements and our company as a whole and we’ve come a long way over the last 50 years as a network, and as a team. And I’m extremely proud to see the direction in which we’re heading for the next 50.”

Sonitrol, founded in Anderson, Ind., in 1964, is the originator of verified electronic security, after founder Robert Baxter and then Anderson Police Chief Al Cronk adapted the acoustic devices from Baxter’s pest extermination company to detect to human intruders.

“Sonitrol was started from a police officer’s perspective and this is the key in our approach to what we do,” Bates said. “Cronk thought would work well as a burglary system designed to apprehend intruders and reduce false alarms. Together they developed what we now know today as Sonitrol and its impact activated audio detection and verification system.”

The company’s success in apprehending intruders is impressive; since it began recording apprehension statistics in 1977, it has it has assisted in over 170,000 cases. They system is known throughout the industry to be the gold standard when it comes to success — Sonitrol assists police officers throughout North America and has caught more intruders than any other security company in the market.

Fifty years after Sonitrol’s start, there are approximately 100 franchises serving commercial, industrial and institutional clients in an estimated 180 cities throughout North America. The technology provided by Sonitrol is described by Bates as “a simple yet effective concept.” Using Sonitrol’s intruder verification technology, a central station operator is able to listen to an intrusion the second it begins, and when the highly trained operator recognizes a true intrusion, the local the police are contacted and the operator advises them of what he or she is hearing, thus verifying a true break-in is in progress.

“We are able to tell them many distinguishing aspects of the break-in, such as the number of intruders for example, which helps provide police more information they can work with.  This facilitates a quicker police response for our customers and thus results in a high apprehension rate which the customer likes and law enforcement appreciates,” Bates remarked.  “Many times we actually detect the break-in early enough so that the police are able to actually arrive to the customer’s premises and apprehend the intruder before he ever gets inside.”

Bates explained that the ratio of customers to operators at the Sonitrol central station is significantly lower than some other alarm companies, allowing Sonitrol to provide a “much much more personalized service for our customers.”

The company’s technology also ensures the number of false alarms are far and few between. “With the proliferation of new entrants into the security market, I think the industry is going to be seeing a much more serious false alarm problem than the industry has ever seen,” Bates stated.  “Our audio detection and verification technology is going to be more important than ever before as it proves to be the most effective tool in minimizing false alarms and catching the bad guys.”

After accomplishing so much after 50 years, the company is focused on organic growth within its existing market, with no franchise expansion planned at the current time, although the idea remains on the table, according to Bates. “We of course want to continue building on what we have achieved over the last 50 years,” Bates said. “We have been successful and to continue our success into the future, we will be working to improve our technology and maintain our level of service. “