A burglary occurred every 16.4 seconds in the United States in 2013.

This and more information about property crime was released last week by The Federal Bureau of Investigation in Crime in the United States, 2013. The report shows that the estimated number of property crimes decreased 4.1 percent. There were an estimated 8,632,512 property crimes reported to law enforcement last year. 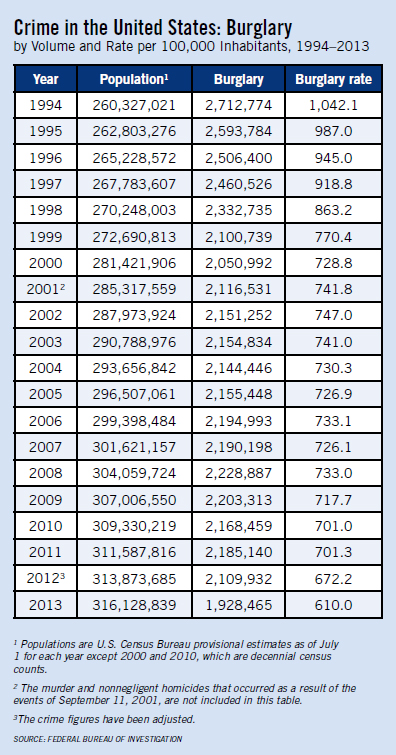 Although Crime in the United States reports on all of those crimes, most relevant to security installation professionals is the burglary category. The UCR Program defines burglary as the unlawful entry of a structure to commit a felony or theft. To classify an offense as a burglary, the use of force to gain entry need not have occurred. The UCR Program has three sub-classifications for burglary: forcible entry, unlawful entry where no force is used, and attempted forcible entry. (The UCR definition of a “structure” includes an apartment, barn, house trailer or houseboat when used as a permanent dwelling, office, railroad car (but not automobile), stable, and vessel.)

Here are some other quick findings from Crime in the United States, 2013: