This website requires certain cookies to work and uses other cookies to help you have the best experience. By visiting this website, certain cookies have already been set, which you may delete and block. By closing this message or continuing to use our site, you agree to the use of cookies. Visit our updated privacy and cookie policy to learn more.
Home » Honeywell Shows a New Premium Connected Home Security System at CES
SDM NewswireHome Automation / Entertainment 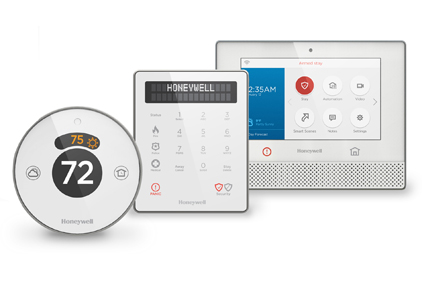 Exhibiting at the Consumer Electronics Show for the first time, Honeywell is showing its new Lyric security and connected-home platform, featuring a uniform, sleek and industrial design, which the company says is “more about the experience than the technology.”

Lyric home security is the second product in the Lyric family, joining the thermostat which was introduced in 2014. It is a very sophisticated platform considered to be a “premium system” once launched around the ESX show in June. It is designed to make security and connected-home actions intuitive for the homeowner, as well as fun to use. For example, Lyric home security will respond to voice commands based on personalized presets. Homeowners will be able to disarm the system simply by saying: “Hello Lyric, I’m home!” which could also switch on the lights and adjust the temperature to their preferred setting. Using a customer’s smartphone location, the Lyric thermostat knows when homeowners leave and when they’re coming home to adjust the temperature accordingly. There are six present smart scenes, as well as customized smart scenes that can be set.

Lyric was designed to help dealers sell more systems, improve profitability/lower their operational costs, lower attrition rates, and make it easier to install. In conjunction with the introduction of the Lyric platform, the AlarmNet Dealer Portal has been revamped to provide a substantial level of remote diagnostics, as well as remote management and programming capabilities for Lyric. For example, instead of a truck roll to change a motion sensor to a pet-immunity setting, it can be set as an over-the-air update. Through the portal dealers can get data analytics on which customers are using which services and which accounts need attention.

In addition to both a controller and a gateway product that connects directly to an RJ45 and is completely programmable from the cloud, Honeywell is showing a keypad, siren, smoke detector, key fob, and intrusion sensors of motion, glass break and contact, as part of the Lyric security family. The sensors are based on Honeywell’s new SIX two-way wireless technology that features vastly increased range compared with the company’s 5800 sensors. Lyric home security will also integrate with a range of home automation products, such as connected thermostats, lighting, shading, and lock controls. For example, the system integrates with Schlage, Kwikset, and Yale on the lock side.

Stay tuned for more on Lyric in the February issue of SDM.