Security Integrator Assists Police in Solving Burglary At its Own Headquarters

LMI Systems Inc., an OnSSI Platinum Channel Partner based in Tucker, Ga., has a deep knowledge of the security industry — both its success stories and its failures. Beginning as an electrical contractor, LMI now spans eight disciplines in the telecommunications, electrical, and electronic safety and security industries and has become one of the top security integrators in the state of Georgia. It’s not often that a security company gets a first-hand chance to test out their products, but that’s exactly what happened when a break-in occurred at LMI’s Georgia facility.

LMI runs a 31-camera system throughout its facility and parking lots on OnSSI’s Ocularis 5 Enterprise Video Management System (VMS), capturing high-definition video 24/7 at the company’s 61,000 square-foot Tucker facility. Ocularis 5, the latest version of the Ocularis VMS, takes a fresh approach to managing camera integrations, data storage handling and recorder management, based on a new recorder technology that accommodates a significantly higher density of cameras per recorder while maximizing HDD storage, without the need for user configuration.

LMI’s Ocularis system came in handy for the integrator on August 3, 2017, when the building was burglarized by a pair of suspects who smashed through the facility’s front door. Scott Goodwin, president and co-owner of LMI Systems Inc., described the incident as a “traditional smash and grab.” 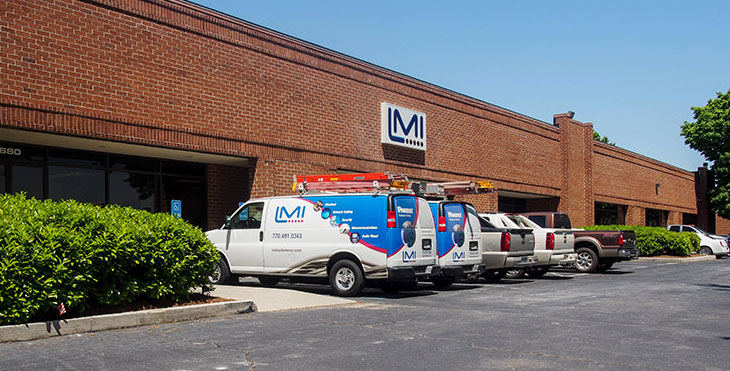 On August 3, 2017, the LMI Systems building was burglarized by a pair of suspects who smashed through the facility’s front door.

“We have 30 or 40 TVs in the facility and they stole 13.” The perpetrators also took two laptops, a camera system, some personal items, and even a golf putter. “The cost to the company was over $25,000 in damage and stolen property,” Goodwin said.

Because of the Ocularis system, the burglary was met with a lightning-fast reaction from LMI. The 3-megapixel Sony cameras installed at the facility grabbed crystal-clear images of the suspects and their vehicle, which law enforcement used to apprehend one of the two suspects almost immediately.

The VMS provided LMI with instant access to the video of the break-in, without the need to scrub through hours and hours of video to find the appropriate timestamp. Using the Ocularis system, LMI operators were able to pull the footage, put it in chronological order, and download it to a flash drive for the police in only 30 minutes. Goodwin credits the Ocularis thumbnail search feature specifically for the speed with which LMI operators were able to find the appropriate video data.

When they were apprehended, the assailants had broken into four more buildings, none of which had security footage of high enough quality to assist in the identification of the suspects. “The police told us that if it weren’t for the camera footage that LMI provided them, they wouldn’t have caught them,” Goodwin added.

LMI’s Ocularis system had been installed initially to protect against internal theft, quickly proving its value by catching a new hire who stole laptops used for orientation purposes. When LMI personnel noticed the missing equipment, they used the search function within the system to review the security video, watching for suspicious activity. When they spotted an employee leaving the building numerous times carrying a backpack, they questioned that employee and were able to recover the laptops.

With Ocularis continuing operations at their facility, LMI plans to maintain its high level of security and expand the system in the future to include features such as license plate recognition. While they were already strong advocates for the VMS, the incident has made them even bigger enthusiasts. “The Ocularis system is what caught the perpetrators,” Goodwin said.