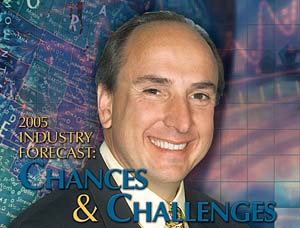 In many ways, Guardian Protection Services of Pittsburgh, Pa., fits the new profile of security company â€“ one that is embossed by the results of SDMâ€™s 2005 Industry Forecast study.

This new dealer has a tighter focus on either the residential or the non-residential market. While approximately 30 percent of respondents to the study consider themselves generalists who serve both market sectors, the vast majority serve either one or the other â€“ 38 percent predominantly sell to residential and 31 percent to non-residential. This fact is confirmed by SDMâ€™s 24th annual Industry Forecast study, which was mailed to 2,000 subscribers. 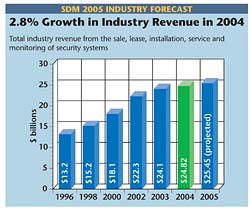 â€œConsistent with what weâ€™ve experienced in past few years, our firm expects to see the strongest growth in the residential sector, mainly in new construction,â€ says Joseph Colosimo, president of Guardian Protection Services. â€œOver the last couple of years, the new residential construction market has been our principal strategic focus.â€

Colosimo explains that the retrofit market for alarms has been tougher since telemarketing laws came into effect, particularly the National Do Not Call Registry.

â€œAt one time telemarketing was 30 percent of [our] business,â€ Colosimo notes. Although referrals and other sales methods still account for about half of the companyâ€™s residential volume, Guardian has replaced business that previously had come through telemarketing with business from new construction.

â€œA significant portion of our growth is in the new residential construction market,â€ Colosimo says. â€œGiven the continuance of a relatively stable interest rate â€“ and the economy seems to be recovering (although modestly) â€“ I believe weâ€™ll experience double-digit growth in 2005 as we did in 2004.â€

Dealers and integrators cite â€œeconomic conditionsâ€ as the one factor they think will have the most impact on sales in 2005. It was chosen by 28 percent of respondents to SDMâ€™s Forecast study, although it was cited less often by 10 percentage points compared with the previous year (38 percent), which may mean that security dealers have more faith in the economy in 2005 than they did in 2004.

In its place, more survey respondents in 2005 than in 2004 cited crime, sales/marketing efforts, disposable consumer income, and residential building activity as major factors to affect sales this year.

â€œDisposable income and residential building activity really tie together,â€ Colosimo says. â€œWhat Iâ€™m seeing a lot of in the new construction industry is the homes for the 55 and older community, and they have a lot of disposable income, which leads to much larger sales.â€

On December 1, 2004, the U.S. Department of Commerce's Bureau of Economic Analysis issued a news release stating that disposable personal income had increased 0.2 percent in September and 0.6 percent in October. Positive news exists in the building market, as well. A new report issued by The Brookings Institution (www.brook.edu), titled â€œToward a New Metropolis: The Opportunity to Rebuild America,â€ by Arthur C. Nelson, states that, in order to accommodate new population growth and replace lost housing, the United States will need to construct almost 59 million new housing units between 2000 and 2030. The fastest-growing segment of the housing market will be for our nationâ€™s elderly population, the report notes.

Like Guardian Protection, other security dealers may be facing similar challenges related to sales and marketing. In addition to telemarketing restrictions, companies may be challenged to make more sales with fewer people. In addition, some think the market for stand-alone security systems may be reaching â€œsaturation.â€ Nationwide penetration of alarm systems is 21 percent of U.S. households.

â€œWe talk to the builders and they say even in the worst time, their market doesnâ€™t fluctuate more than 15 percent,â€ Colosimo says. â€œItâ€™s possible that something bad could happen and it would decrease; still, people are building new homes all the time. We believe as long as the interest rate stays stable, we should not see much decrease in the installation volume in the new construction program. Theyâ€™re building tens of thousands of homes across the country every month, and weâ€™re only looking for some portion of that.â€ 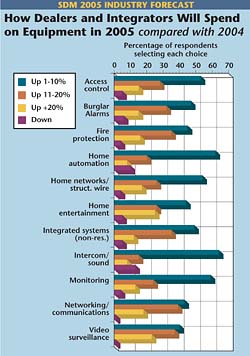 SDMâ€™s Forecast study confirmed the keen interest on the part of traditional security companies to purchase and resell home entertainment products. The survey asked dealers to indicate how they expect their level of spending in 2005 to compare with 2004, across a broad range of product categories. For those who indicated their spending would increase, the survey asked, by how much? 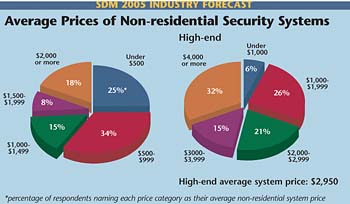 â€œOur burglar alarm sales are actually increasing and are 80 percent of what we do,â€ Colosimo says. â€œThe other heavily weighted [products] are the non-security-related home services, and obviously thatâ€™s becoming a large part of our business. â€¦if youâ€™re just looking at sales revenue, probably 30 to 35 percent is coming from home services now,â€ he says of his companyâ€™s Guardian Home Technologies brand.

The company already operates in 17 markets, and plans to open operations in Phoenix, Ariz., and Charlotte, N.C. in the first quarter of this year. â€œAll the new markets weâ€™re opening up are based on growth prospects in the new construction industry,â€ Colosimo notes, adding that sales revenue strictly from Guardian Home Technologies is expected to double next year, reaching $35 million. â€œItâ€™s a whole different business now,â€ he adds.

But for the industry as a whole, 2004 revenue growth was more moderate, according to the SDM 2005 Industry Forecast study. Total revenue grew 2.8 percent in 2004 to $24.82 billion industrywide. In order to calculate this figure, Forecast survey respondents are asked to state their companyâ€™s revenue from the sale, lease, installation, service, and monitoring of security systems, including alarms, access control, video surveillance, life-safety, home systems, and related low-voltage systems. Respondentsâ€™ answers are then projected for the industry, based on representative unit counts of various-sized companies in the security industry. 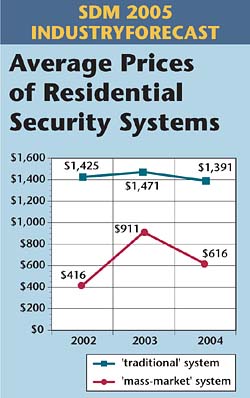 Two-thirds of survey respondents expect their 2005 annual revenue will increase over 2004, slightly less than one-third expect no change, and just under 3 percent anticipate a decline. Based on the percentage of increase or decrease respondents expect in their annual revenue this year, SDM projects total industry revenue to expand 2.5 percent to $25.45 billion in 2005.

Where will new growth come from? Dealers and integrators are fairly evenly split between the residential market (45 percent of respondents) and non-residential market (55 percent of respondents) when asked to name the one segment that will produce the highest rate of growth in 2005. More specifically in non-residential, the most anticipated areas for growth are retail, industrial/manufacturing, and government markets.

Hence, the expansion of services such as remote video monitoring, which can be a useful tool for business managers, is indicated by SDMâ€™s Forecast study. Nearly three of 10 survey respondents (29 percent) now offer such services, according to the study. This figure has increased three percentage points in one year. While there are significant variations in how such services are offered â€“ for example, alarm verification, remote guard tours, and more â€“ the industry has reported a median price of $50 for monitoring. 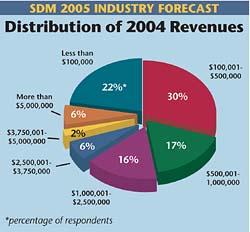 The other significant factor that will affect sales growth in the non-residential market is a companyâ€™s information technology/networking expertise. Survey respondents say they now use their expertise in this area on more than half (56 percent) of new installations and projects. More than three-fourths of dealers and integrators say that within three years, their companiesâ€™ expertise in networking will have more influence on their sales.

Networking skills will play a critical role in the future of a firm that specializes in video surveillance and access controls, as evidenced by SDMâ€™s Forecast study. In the product categories of video surveillance, access control, networking/communications, and integrated systems, greater than 95 percent of survey respondents expect to increase their equipment spending in 2005. 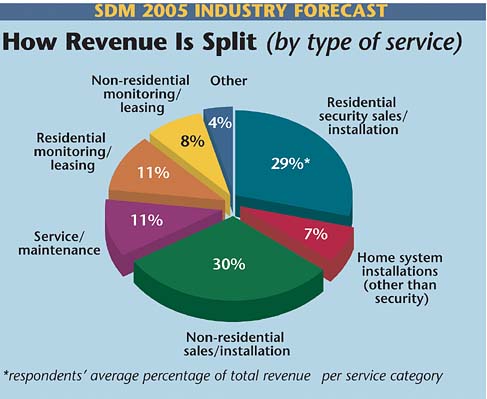 On the residential side, authorized dealer programs operated by a variety of organizations are helping provide dealers with the tools needed to close more sales and expand into new markets. More than four out of 10 (44 percent) of SDMâ€™s subscribers belong to one or more dealer programs. However, this is fewer than in 2004, when 50 percent of dealers were involved in an authorized dealer program. Restructuring of some of the major programs in the industry clearly has had an impact. 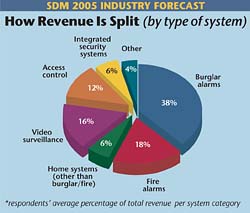 With relatively little acquisition activity (5 percent of respondents were involved in an acquisition in 2004), clearly the challenge in 2005 will be generating organic sales and showing profitable growth. When asked what will be most challenging in 2005, dealers and integrators selected â€œincreasing salesâ€ as the No. 1 factor, followed by â€œprotecting profit marginsâ€ and â€œcontrolling costs.â€ Most think that the toughest competition in the coming year will be from large companies and national companies. And, with pricing of services fairly stable (the SDM 2005 Forecast study shows the average monthly price of residential monitoring is $23 and non-residential monitoring is $29, and most survey respondents expect those prices to stay level), dealers and integrators will increasingly turn to new products and services for adding revenue.

How much revenue will be determined in large part by a stable economy and their ability to compete with creative products and services. 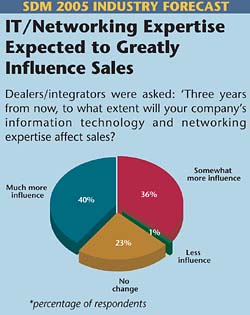 How the Survey Was Conducted

The objective of SDMâ€™s Forecast study is to measure prior-year sales activity, revenues, business challenges, market opportunities, and other factors, and to project current-year revenues and trends. In mid-October 2004, SDM mailed a four-page questionnaire to a random sample of 2,000 of SDMâ€™s subscribers, with varying levels of incentives to complete the survey. Respondents â€“ who are security dealers and systems integrators â€“ mailed completed questionnaires back to SDM by mid-November, and results were tabulated on a 17 percent response rate.

The Iron Is Hot