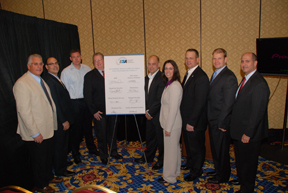 Eight members of ESA signed the new Standards of Conduct as a show of support during ISC West.
At a press conference held yesterday during ISC West, the Electronic Security Association (ESA) announced a stricter code of ethics and stronger standards of conduct for its members, which represent more than 2,800 security companies in the United States.

Of the approximately 3,900 industries tracked by the Better Business Bureau, security ranks No. 70, said ESA’s executive director, Merlin Guilbeau. The number of complaints is up, Guilbeau said, although it is a “small number of companies giving us a bad name.”

“We believe a stricter policy for sales calls, backed up by tougher enforcement, is vital for enhancing the image of our industry and creating more success for our member companies, Guilbeau stated in a press release distributed by ESA on March 24.

The press release went on to relate that “the new requirements are intended to reduce the number of complaints from consumers such as Mary Jackson of Richfield, Minn. Last April, the 87-year-old was coerced into replacing her existing ADT alarm with a system from another company after receiving a high-pressure sales presentation from a pushy, door-to-door salesman who lied and misled her. After several phone calls and letters, Jackson was able to get out of the contract and have her original service restored.”

ESA said the requirements in the new Standards of Conduct include:

ïƒ¼ More Respect for Consumers â€” When requested by a consumer, a sales representative shall immediately discontinue a presentation and leave the premises.

ïƒ¼ No False Accusations About Competition â€” Sales representatives may not make any false statements about competing organizations.

ïƒ¼ Improved Customer Contract Requirements â€” Written materials, which clearly and conspicuously disclose all terms and conditions, must be presented to customers when closing the sale.

ïƒ¼ Better Refund Policies â€” Prior to the sale of any product or service, sales representatives must disclose all termination fees and must honor all refunds in accordance with their company’s policies.

In support of the change is the Council of Better Business Bureaus (BBB), according to ESA. In 2009, BBB received nearly 3,000 complaints against the home alarm system industry, the association revealed.

“BBB hears from thousands of homeowners every year who feel pressured, manipulated and misled by a door-to-door alarm sales representative, and trust in the industry as a whole is being undermined by these rogue reps,” said Stephen A. Cox, president and CEO of the Council of Better Business Bureaus. “We hope these more stringent rules will encourage every player in the industry to bring integrity and honesty to the forefront of their customer service and sales practices.”

The new requirements take effect immediately and could result in termination of ESA membership for those failing to comply. For a copy of ESA’s Code of Ethics and Standards of Conduct, visit www.esaweb.org.