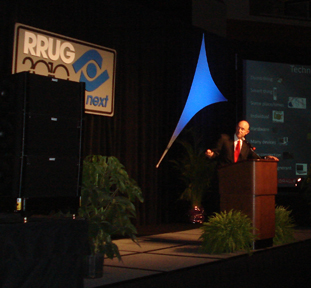 This year’s Users’ Group offered everything RRUG 2009 did, along with an enhanced course load, more vendors, and additional opportunities to meet Rapid Response staff. The four-day meeting brought together more than 250 companies, represented by over 450 attendees in all.

Thirty-two educational services and courses were offered during RRUG 2010, including fire, technology, sales and marketing, and business tracks. All courses provided attendees with National Training School and/or New Jersey CEU credits. Among these courses were dealer-to-dealer roundtables in which dealers were presented with thought-provoking situations by industry professionals, and were then given the chance to discuss possible solutions and methods of improvement with other dealers.

Rapid Track seminar focused on Rapid Response Monitoring’s proprietary software and web-based services for extended dealer and end user connectivity. RapidLink3k™ and RapidWeb3k™ were among the new Rapid technologies introduced. Within the Rapid Technology Room these two new tools were demonstrated on computers, iPhones®, and iPads™, giving dealers the chance to fully experience the capabilities they and their end users soon will have. The iPads created quite a buzz at RRUG, culminating with six random iPad give-aways on the final night of the event.

Earlier in the meeting, RRUG hosted a private party for all attendees at Turning Stone’s exclusive indoor/outdoor night club, Lava. Food was served outdoors near a fountain surrounded by private cabanas where dealers gathered. Inside the nightclub there was music and two magician performers: Daniel Uzunoff, local “Magic Man,” specializing in slight of hand, and NBC’s America’s Got Talent performer, Shimshi, a resident Las Vegas Wynn Encore magician.

Numerous speakers presented their knowledge and outlook to dealers and other attendees. Perhaps the most memorable of these presenters was the keynote speaker, Eric C. Haseltine, president and managing director of Haseltine Partners LLC. Haseltine has earned degrees in economics and psychology, as well as a Ph. D. in Physiological Psychology, which he applied to his thought-provoking presentation on Tuesday night. He discussed the value of opportunities and how to envision one truly great idea for the future and make it both possible and profitable in the present. While walking the group through the process of expanding their businesses while maintaining efficiency, Haseltine astounded all with his vision of where the security industry is headed.

The event was wrapped up with the Rapid Classic Golf Tournament on August 4, providing attendees the opportunity to compete on the Shenandoah Golf Course, the same course the PGA Golf Tournament was played on just days later.

Speakers and In-Ground Subwoofer for Outdoor Use