Americans are waiting and watching, as is the security industry, for an answer to the question: If we are truly on the road to economic recovery, why is it so slow-moving?

In the security industry, channel leaders at dealer and integrator businesses expect a slight upturn in 2011. Many believe that the industry has indeed turned a corner and is on the road to recovery.

Economic indicators still are somewhat mixed. An outlook published by Kiplinger calls for gross domestic product (GDP), a major indicator, “to advance to about 3.5 percent for 2011.” The 2.8 percent pace of 2010, the outlook notes, was sub par for a recovery. “In fact, the sluggish growth that followed a rousing 2009 fourth quarter and first quarter 2010 has been raising fears that the economy may tumble into recession again,” the outlook asserts” adding that the recent tax cut legislation “slams the door on that worry.”

“There are certainly some risks,” says SDM’s Systems Integrator of the Year, Siemens Industry Inc.’s Carey Boethel, who is vice president and business unit head of Siemens’ Security Solutions, based in Deerfield, Ill. “All things considered, we think the economy and our industry has a strong possibility to see some growth.”

Boethel acknowledges that some security companies are still hurting, “reeling perhaps, from some of the initial pressures that came in late 2008 and in 2009.” He points to the very steep downward trend of 2009 and how that began to taper off in 2010. “We believe that the decelerating rate of decline…is the process of the industry turning the corner and returning to growth. It’s happening now; it will be slow and it will be deliberate,” Boethel says. “The net of it all is 2011 is expected to be a great year and the industry in general will return to growth as a result of it.”

That’s what many other security executives predict, too. According to new results of SDM’s 2011 Industry Forecast Study total industry revenue is expected to inch up by 0.9 percent to reach $44.33 billion this year. Their predictions for this increase follow two consecutive years of decline, measuring decreases of 7.8 percent in 2009 and 1.6 percent in 2010, over each of the prior years.

The Industry Forecast Study, which has been conducted annually since 1981, shows that 45 percent (compared with only 35 percent a year ago) of integrators and dealers expect this year’s revenue to exceed last year’s.

“We see an increase of 2 to 3 percent over 2010 for The Protection Bureau,” says Matthew Ladd, president and chief operating officer of the company that was named SDM’s Dealer of the Year last December. If Ladd is correct in his forecast, this would be his company’s second straight year of improvement, as The Protection Bureau was up 5.5 percent in 2010 over 2009, but still down 9 percent over 2008. “We measured ourselves on how we did not only against 2009, but against 2008. It was easy enough to beat last year, but not the year before,” Ladd says.

As for the 5.5 percent increase, The Protection Bureau saw much more activity by clients in 2010. Another contributor to increased revenues was tighter profit margins. “We lowered our margins to win business,” Ladd says. “When you’re dealing in the integrator market, your competition is tough so you end up needing to get better at what you do, reading specs tighter, being creative in how you respond to specs. And we went back to ‘solutions selling,’ trying to get clients to concentrate less on the dollars and more on the solutions,” he emphasizes.

Now more than two months into its fiscal year, Ladd says The Protection Bureau is starting with a stronger backlog, “and that’s a good sign.”

Some signs, such as backlog, are positive developments. Other signs may harbor negative results. For example, several signs point to reduced federal spending in 2011, and the impact that will have on the security systems integration business is unclear.

“We saw through the recession that public sector spending helped prop up certain aspects of our industry, and as we come out of the recession, we expect that support to shift back to the private sector. Whether that causes a net increase or a decline in industry sales, it’s clear to us that there’s going to be a mix change in the spending,” Boethel says.

Whether the private sector picks up the slack that the public sector leaves behind largely depends on how the employment issue plays out.

Kiplinger’s 2011 Economic Outlook predicts approximately 2.5 million net new jobs this year, following an increase of 1 million last year. Remember, however, that about 8.5 million jobs were lost in 2008 and 2009. “Since the recovery began in June 2009, when GDP turned upward, only about 1 million jobs have been restored. Gains in employment have lagged. "In fact, the economy lost an additional 1 million jobs in the first six months of the recovery,” the outlook states.

Employment, integrators say, is a factor that has the potential to slow industry growth in 2011.

A combination of recent increased activity in the security business and positive, although slow-to-arrive, economic indicators show that the security industry may have finally turned the corner on the recession. “2011 does seem to be a growth year,” Ladd believes. “An increase in the requests for bids, interest in video monitoring, the success rate we’ve had on solutions we’ve won in the past couple of months. If those things continue and should the tax cuts stay in place, I think you’ll see that it should be a growth year.” 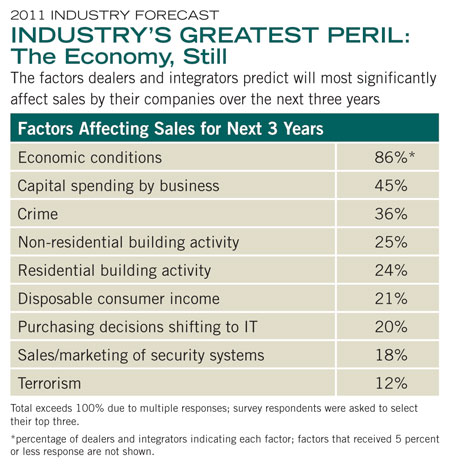 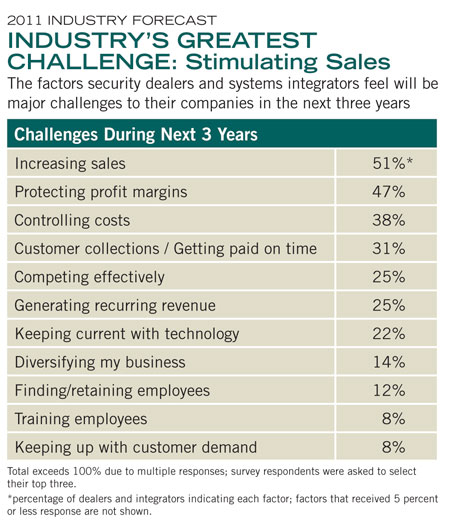 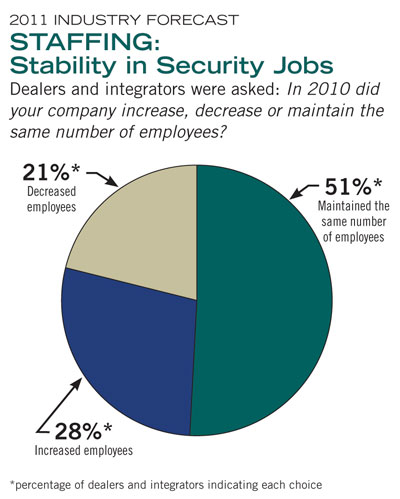 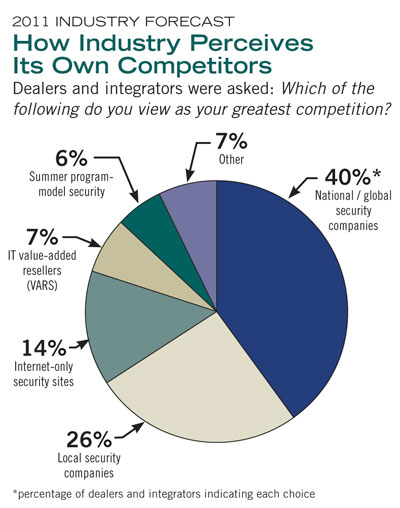