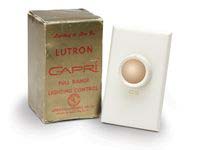 The original Capri (circa 1964), the light dimmer designed by Joel Spira, was donated to the National Museum of American History, which also received other materials from Spira, chairman and founder of Lutron Electronics.
Move over Dr. Burt. See you later George Smith and Willard Boyle. It’s Joel Spira’s turn in the Smithsonian Institution’s American history spotlight.

Just a few months ago, in a special donation ceremony, Spira, inventor and developer of the solid-state electronic “dimming device” and chairman and founder of Pennsylvania-based Lutron Electronics, gave materials related to the company’s 50-year history to the National Museum of American History. They included an early version of the original solid-state (devices using transistors) Capri dimmer manufactured by Lutron in September 1964, a retail display featuring the fully functional dimmer and other Lutron dimmers and lighting-control systems that show lighting control developments at the company over the past 50 years.

The museum requested objects and papers that would provide insight into Spira’s career as an inventor such as his original inventor’s notebook with more than 100 pages of handwritten documentation and historic photographs.

The Lutron materials joined other artifacts in the museum’s Electricity Collection, including experimental light bulbs from Thomas Edison, dimming light sockets from the 1910s, theatrical lighting controls from the 1920s and many types of light switches. The Smithsonian Collection also includes early security inventions such as a 1927 photoelectric burglar alarm, invented by Dr. Robert Burt of the California Institute of Technology, and the original 1969 charged coupled device or CCD, which Smith and Boyle invented while at then Bell Labs.

“As the nation’s history museum, we tell the story of this country in all its depth and breadth,” said Brent Glass, director of the museum. “Collections such as this one from Lutron help us to understand the continuation of the electrical evolution, the process of invention and the history of business and manufacturing.”

Spira developed a way to reduce the light output of an incandescent bulb in his New York apartment in the late 1950s, which extended the life of the light bulb and saved electrical energy. The commercialization of the solid-state dimmer has made such control of interior lights affordable for most homes.

"I am pleased to donate these artifacts to the museum," Spira said at the time of the personal donation. “For the past 50 years, the solid-state dimmer has made homes more beautiful and offices more efficient, all while saving energy and increasing lamp life. It is an honor for me to be in the company of Edison and others in this collection. I am truly humbled.”

Hal Wallace, associate curator of the museum’s Electricity Collection, said, “American homes changed significantly during the 20th Century as people adopted electricity for any number of tasks, including illumination. Objects such as those being donated by Lutron fit in nicely with the switches and control devices we preserve that date back to Edison’s day. Studying the tools of everyday life, such as light switches, helps us to understand our ever-changing technological society.”

The National Museum of American History collects, preserves and displays American heritage in the areas of social, political, cultural, scientific and military history.