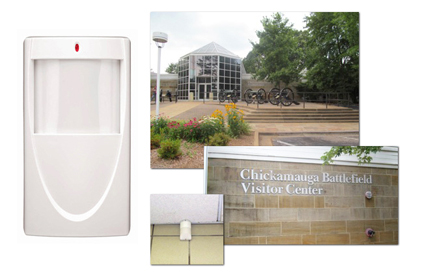 This year marks the 150th anniversary of the U.S. Civil War’s Campaign for Chattanooga, Tenn. Besides an impressive array of authentic cannon, the modern Chickamauga National Military Park Visitor Center, in Fort Oglethorpe, Ga., is guarded by Napco Dual Technology Detectors for their stronghold, fighting false alarms and providing superior detection in all sorts of conditions, including RF, sunlight, vehicle lights, lightning, HVAC shifts, and more — all factors in this glass-atrium building. The attractive visitor center stands in stark contrast to the battlefield of the same name, as Chickamauga, with an extended front of 150 miles, is the site of the bloodiest two-and-a-half day battle of the Civil War, where in 1863, Union and Confederate forces fought for control of Chattanooga, known as the "Gateway to the Deep South,” for its strategic railways and position. Newly revised estimates for overall losses in the U.S. Civil War now include more than 750,000 American casualties, with the highest counts and hardest fighting here, in adjacent south Tennessee and north Georgia.

It has been said, due to scope, magnitude and importance,“No battlefield park of this quality and magnitude could be found in any other location in the world.” So, it is with pride that Napco Adaptive® Dual Technology Microwave/PIR detectors were chosen to help protect the important site.  In fact, the battlefields of Chickamauga and Chattanooga were the nation’s first official military parks, signed into law by President Harrison in 1890.  “In recommending creation of the park, both House and Senate military affairs committees pointed out that probably no other field in the world presented more formidable natural obstacles to large-scale military operations than the slopes of Lookout Mountain and Missionary Ridge. Chickamauga and Chattanooga National Military Park, were officially dedicated in 1895.” Most of the 1,400 monuments and historical markers on the battlefields were planned and placed by veterans of the battles, under the supervision of the War Department, which administered all national military parks, until they were later transferred to the National Park Service.

Napco Adaptive® Dual Technology Microwave/PIR detectors automatically adjust to their environment, minute by minute, for the optimum false alarm immunity and reliability. Upon installation, a Napco Adaptive Microwave/PIR detector powers up, initialized in the first of its 12 sensitivity modes, i.e., the most sensitive, enabling it to sample prevailing environmental conditions. Faced with hostility or tranquility, the Adaptive detector automatically selects the most appropriate detection mode accordingly, optimizing both intruder catch and stability. Each time the sensors detect a stimulus strong enough to generate a signal, but insufficient in strength to indicate an alarm, the detector will automatically change sensitivity modes, effectively widening the gap between the detected signal and its alarm threshold. Therefore, environmental disturbances, those that register by the PIR and/or microwave sensor, are better tolerated and the threat of false alarms or nuisance alarms is dramatically reduced.