Top Trends in Unified Security Systems and How Integrators Can Benefit

Seamless integration between a growing number of systems and technologies creates greater opportunities to grow profitability.

The last year or two has seen an increase in the number of end users, security integrators, consultants and others who are looking for the benefits of unified systems. Unified offerings deliver enhanced interoperability and improved ease of use you don’t get with just an integrated system, says Kristy Dunchak, senior director of product management, security products converged solutions, Johnson Controls, Westford, Mass.

“There’s something to be said about one pane of glass in a sense that they can do everything from that system and they don’t have to bounce back and forth,” she says.

“We see more and more systems being natively integrated, meaning they have been integrated by the manufacturer from day one into a single code base, a single UI (user interface) and a single sign-on,” he says. “In the enterprise and critical infrastructure, when we talk about security per se, we see more and more video and access being integrated together and that integration becoming more and more native.”

“With unified systems, you’re going to get that consistent functionality,” Dunchak says. “You know the video is going to act in a certain manner because the manufacturer built it with that in mind. It wasn’t an afterthought; they built the unification trying to get the efficiencies for the end user and then the maintenance benefit on the integrator and installer side.”

A number of the top trends and new developments in unified systems can pay dividends for security integrators who are poised to take advantage of the new opportunities the solutions create.

Largely driven by the Internet of Things (IoT) and the growing number of systems and devices that are being networked, there has been a significant expansion of the range of technologies that are now able to be brought into a unified system.

“Gunshot detection, facial recognition, glass break and other emerging technologies will broaden their scope and begin to create specific security solutions focused on different vertical market challenges,” says Bret McGowan, senior vice president, sales and marketing, Vicon Industries, Hauppage, N.Y. “They may also incorporate solutions not traditionally managed from within a physical security platform, such as those related to facilities management and industrial operations, or emergency dispatch and life safety.”

“I think we will
see the evolution of unified systems as a truly integrated building solution with the concept of native integration with a single code and single sign-on.”
— Alessandro Araldi, Honeywell Home and Building Technologies

From a systems integrator perspective, the name of the game is keeping end users happy, and unified systems are positioned to do just that, says Jimmy Palatsoukas, director of product marketing, Genetec, Montreal.

“With the addition of new sensors like radar and laser detection and analytics, it’s about heightening security and helping their customers become more secure. The fact that we’re unifying these additional systems also leads to greater operational efficiencies.”

“A big trend is toward integrating other systems, whether it’s energy management, lighting and others, to create a whole building solution,” he says. “I think we will see the evolution of unified systems as a truly integrated building solution with the concept of native integration with a single code and single sign-on.”

“The more you know about what is really happening in your ecosystem, the better you are able to manage any situation,” Tucker says. “By combining the information from multiple systems across an enterprise, security professionals can have much deeper insight into real risk. For example, by combining a person’s activity in the physical security system with their activity in the cyber world, you can identify risks of data theft that looking at either system alone might not show.”

“New technologies such as robotics, drones, and smart devices are allowing security practitioners to literally advance the border of security and allow real time capabilities in dangerous or unknown situations,” Tucker says.

“Our focus now is how
to embed the analytics within the security platform so it doesn’t feel like a thirdparty or integrated system but it’s part of that bigger, unified platform.”
— Jimmy Palatsoukas, Genetec

Not surprisingly, analytics — video and otherwise — are playing a greater role in making data more manageable and more actionable. Analytics have gained traction in the last 12 to 18 months, and the way those analytics are deployed is changing thanks to unification. Up until last year, Palatsoukas says, it was all about connecting and pushing data to third-party analytics systems, having those systems process the data and then leaving organizations to figure out what to do with that data.

“Our focus now is how to embed the analytics within the security platform so it doesn’t feel like a third-party or integrated system but it’s part of that bigger, unified platform,” he says. “With analytics, what you’re doing is structuring data, so you’re taking complexity out … and you’re trying to help customers make more intelligent decisions.”

Given the number of legacy systems that remain out there in the installed base, migration has become an important topic for unified systems.

“A lot of times, it may be economically prohibitive to scrap an existing system and move to a unified platform,” Palatsoukas says. “It’s very important for systems integrators and vendors to offer clear migration paths.”

So how do you make it easier for an organization to take its existing legacy infrastructure and slowly migrate to a unified platform over time? This is particularly true of access control systems, where there are huge investments in systems that are very old, making it expensive for end users to move away from them, Palatsoukas says. 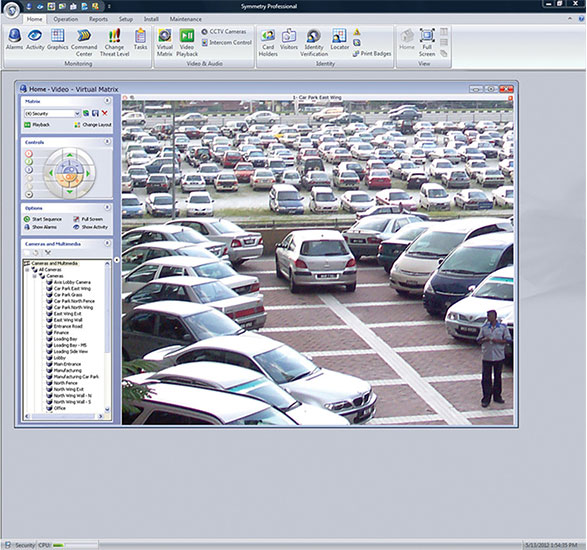 While video will always be key component of integrated solutions, deeper unification of a wide variety of systems is enhancing overall security and increasing efficiency for end users. Photo courtesy of AMAG Technology

Given the nature of integration within unified systems, the architecture of these systems makes it easier for third parties to get involved, which creates a more open approach to unification that will benefit everyone, Araldi says.

“It’s all about the technology. There are more and more companies that are now opening up their systems to third parties to integrate,” he says. “Eventually, as we’ve seen in other industries, this will benefit everybody. It will benefit the solution providers because we make the solution richer and also we don’t have to develop everything in-house. We have a number of other solutions that we offer to customers that come from third parties that integrate without platforms. It makes the system more open and allows them to not put all their eggs in one basket.”

A notable factor about unified systems is that the architecture of newer systems makes them much more scalable and extensible than in the past, making them more future-proof for end users, Araldi says.

“Integrators that understand and embrace these new technologies will find there are large customers willing to invest heavily in these projects and much less pressure on price,” he says.

In addition to reducing the role of price in decisions, this also allows integrators to change conversations about security, which leads to greater differentiation, Palatsoukas says.

“This new approach — starting off with unification, expanding the conversation to operational efficiency, better qualifying data, better understanding their environment and better guiding the response — allows us to change that conversation and focus on what end users really want,” he says. “Ultimately, step one is they want to monitor video and lock doors, but they soon realize they’re looking for so much more.”

Looking ahead, overall industry trends will continue to drive the move toward unification versus traditional integration, Araldi says.

“This notion of ecosystem is starting to take hold in the security space as well as in the connected building or smart building space. To me, that is going to be one of the biggest changes that we see going forward,” he says.

Among the many benefits of unified systems is the ability to ensure more comprehensive cyber security. Working with standalone or traditionally integrated systems means each vendor must add cyber security protections to its own product. Some may be robust, while others may be less so, and because any chain is only as strong as its weakest link, that can be a problem.

But companies that are focused on truly unified systems have incorporated cyber security protections that are applied uniformly across the entire ecosystem.

“In our case, we’re able to add these mechanisms to benefit the entire platform, says Genetec’s Jimmy Palatsoukas. “From an end user or systems integrator perspective, they’re activating these mechanisms once; they’re not doing it for each and every system.”

Privacy is a valuable byproduct of this enhanced cyber security, he adds.

“Greater cyber security also means greater privacy because a lot of the data that’s potentially stored in a unified platform or a security platform is personnel data or individuals — employees, visitors and others — that appear inside the video stream that’s recorded by the video platform. That’s all related and we’re looking at tapping into these synergies by developing a mechanism once and then everybody benefits,” Palatsoukas says.

For more information on unified systems visit the following articles: