In 1967, after trying unsuccessfully to purchase Beasley Alarm, a security company that had operated in Amarillo, Texas, since 1926, Dale Elliott and Dorothy Fly Elliott started their own company, which they called Amarillo Burglar Control, later named Allstate Security Industries.

At its inception, Allstate was the embodiment of a mom-and-pop shop, with family playing a key role in building the business. In those early days, the company monitored around 200 accounts using an Ademco 130 monitoring module installed in a spare bedroom in Dale’s mother’s house. Whenever an alarm was activated, she knew to call the police, making her Allstate’s first central station operator. As the company grew, more and more lines ran into the house until it reached the point where this was no longer feasible.

Accomplishing an early goal of the Elliotts to put a more professional stamp on security in the area, Allstate became the first UL listed installation company in Amarillo in 1968. The following year, the company moved its monitoring operation and offices out of the spare bedroom and into a new location, complete with an actual central station. 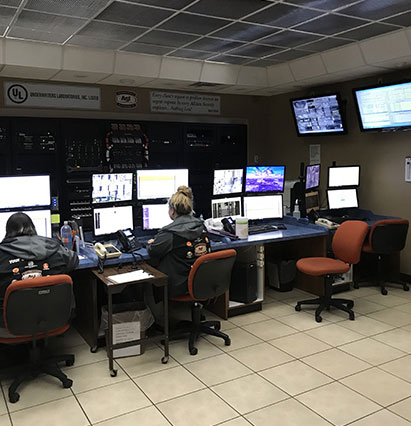 Throughout the ensuing years, Allstate earned additional UL listings, made acquisitions (including Beasley Alarm) and launched a guard service. In 1985, Allstate moved for one final time, taking up residence in the 41,000-square-foot building it currently occupies after building the monitoring center from the ground up to earn a UL listing. Twenty-four years later, Allstate undertook its first major renovation of the facility to update the monitoring center’s appearance and build a new infrastructure.

Obviously, a lot has changed in the last 50-plus years, but one thing that’s remained constant is the company’s commitment to its guiding principles of providing exceptional customer service and maintaining the feel of a hometown central station. As evidence of this, a quote from Dale Elliott posted prominently throughout the company’s facility serves as a mission statement of sorts: “Every client’s request or problem deserves an urgent response by every Allstate Security employee, nothing less.”

Ten years ago, the company monitored around 4,000 accounts. Today, it monitors approximately 16,000 accounts in Texas, Missouri, Arizona, New Mexico, Oklahoma, Kansas and Colorado, and will have customers in 48 states by the end of the year.

In addition to monitoring in seven states, Allstate’s technicians provide service for customers in all but Arizona and Missouri, demonstrating how seriously the company takes Dale’s directive.

“Our technicians will drive six, seven, eight, nine hours to get to a service call,” Dale Elliott’s grandson, Randall Renfroe, says. “Being in Amarillo, we’re in a remote location. We have four state capitals that are closer to us than our own state capital.”

When Elliott unexpectedly passed away in 2012, his grandson and his business partner Rick Drosselmeyer assumed control of the company. In 2017, Allstate decided to revamp the facility “big time,” according to Renfroe. The company spent $250,000 on infrastructure, power backup and redundancy. On the power side, Allstate put in a robust Symmetra APC backup power system — new generators to provide triple power redundancy and ensure constant power to the building. In terms of general redundancy capabilities, the company has four Internet providers and four phone providers, and upgraded its AES long-range radio network. The final part of what would be stage one of Allstate’s renovation was to install all new servers and new computers throughout the entire company.

Once these projects were completed, Renfroe, Allstate’s president, still thought something needed to change with the company.

“We want to be on a level with the larger monitoring companies so we can be able to compete nationally,” Renfroe says. “We’re trying to monitor on the same scale at our size, with the same redundancy and infrastructure while retaining our local, family-owned look and feel. We want to provide that hometown mentality with national services.” 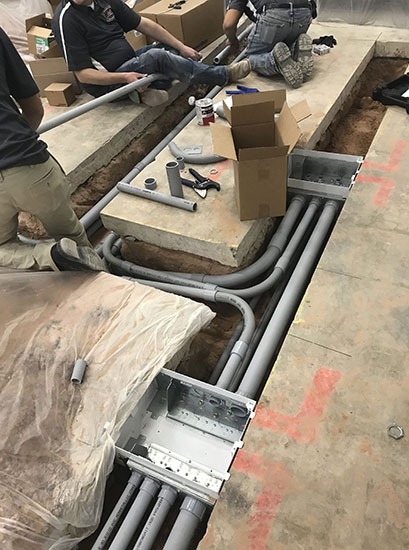 This led to phase two of the renovation: a complete gutting and rebuilding of Allstate’s central station. Fully upgrading the facility meant trenching floors and running cabling and pipe to accommodate all-new, state-of-the-art technologies — all of which would come at a cost of another $250,000. Dissatisfied with the lack of contractors who could take on the renovation project, Renfroe made a bold decision.

“The funny thing is we couldn’t find people to do some of these things in our area so we decided to do them internally. We trenched the floors, we dug out the concrete, we jackhammered it, we ran all new pipe, we ran all the wire, we did all the terminations — we did all of that,” Renfroe describes. “We went in with the mentality that we run cable and we run pipe, so why can’t we do it ourselves?”

The project began three days before Thanksgiving in 2017 and was completed in early March 2018. Renfroe says this turnaround was much faster than could have been expected from an external contractor and serves as a testament to Allstate’s employees’ hard work and determination.

That’s not to say the process was an easy one. The renovation turned out to be a major undertaking, much larger than Renfroe had initially expected. One of the most difficult tasks of this project took place before the renovation could even begin. Allstate’s Five Diamond central station operations were moved into a secure part of the company’s facility with no interruption in service.

“We left the infrastructure in the main room and covered it to protect it from debris. Just doing that part of the project was a big deal,” Renfroe says. “It’s not easy to relocate operators to another room, but our team did an incredible job making sure that transition went as smoothly as possible.”

Prior to the renovation, Allstate had five workstations that were staffed 24/7 by 16 operators, all of whom have earned Level 1 and Level 2 certification through The Monitoring Association (TMA). The renovation added three more stations, which will likely necessitate hiring additional operators in the coming months. Overall the company has experienced tremendous growth, more than doubling in size from 40 employees five years ago to 87 today. 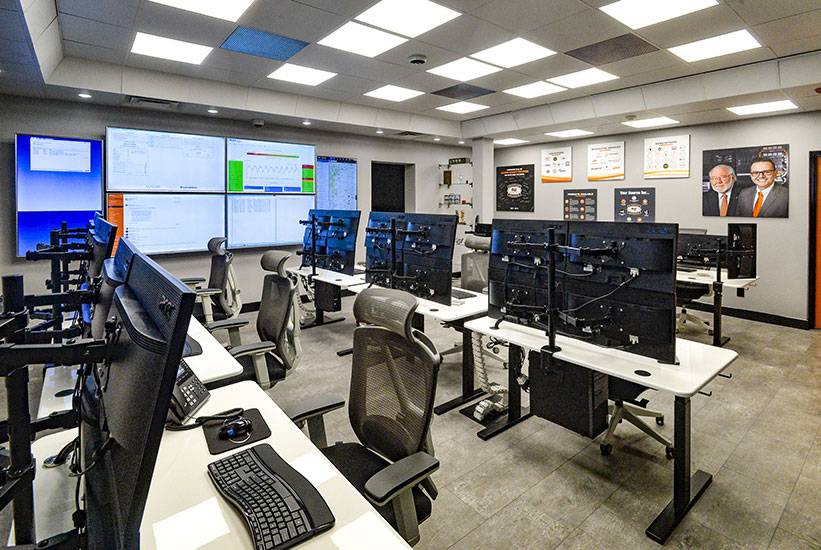 The renovation project also included adding another layer of redundancy to Allstate’s phone lines. In addition to multiple copper and fiber lines, the company installed SIP trunks, which eliminate the need for a physical connection to a phone company.

Allstate installed two video walls that allow the company to provide video verification and viewing, including live footage from its recently deployed drone operations. (See related article, “Is It Time to Sing the (Security) Body Electric?” on page 66.)

“That video wall is going to be a tremendous wall of activity, for sure,” says Paul McInally, Allstate’s business development manager.

“We did a massive amount of research just to find the right video wall provider,” Renfroe says.

Allstate also added a training room, where there are 10 different alarm panels with a variety of devices hooked up to all of them to create a system where the company can have any device work on any alarm panel.

Throughout the process, operators and other employees were allowed to view the progress on the project to give them a chance to see what was happening from an operations standpoint and see how the monitoring side of the business functions. 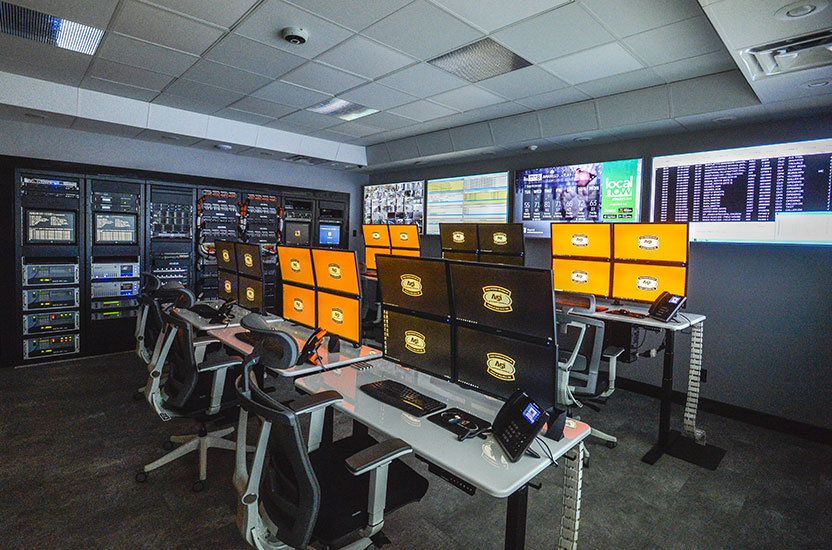 “We all often focus on one area, so it was helpful for them to see the link between different sides of the business. They had a chance to see how the central station operates and how everything ties together,” Renfroe says.

Because they would be the ones spending their time in the new monitoring center, operators were invited to make suggestions along the way, many of which were incorporated into the final design. For example, one person suggested a new use for the company’s old telephony room, which was full of 66 telephony blocks and thousands of phone lines.

Following the employee’s suggestion, Braden decided to turn the space into a decompression room where operators could wind down after a traumatic or difficult phone call.

“With phone lines going away, we don’t need that telephony room. We spent 36 hours [over] three days to move everything out of that room,” Renfroe says. “And with the unpredictable weather in Amarillo, we installed bedding to provide a place for operators to stay if they can’t get home in a snowstorm, for example.”

On top of its new drone solutions, Allstate plans to monitor even more new streams from the renovated center, such as DIY products.

This is all in keeping with one of Allstate’s driving principles — to constantly be innovating to keep up with the latest trends and technologies, sometimes before they even become trends.

“We’ve been saying for a long time, ‘Better a year too soon than a day too late.’ That’s our slogan,” Renfroe says.

“By end of year, we’ll probably have all eight workstations full, so I get to start thinking about the next expansion,” he says.