During the economic downturn of a decade or so ago, investors realized something important about the security industry.

That realization generated a great deal of excitement about the security industry on the part of investors, says Henry Edmonds, founder and president of St. Louis-based The Edmonds Group LLC. Today, that excitement has faded somewhat, but investors are still enthusiastic about the security business — with a few caveats.

“They’re not jumping in just because you’re in the alarm industry,” observes Edmonds. “Today you need a differentiator.”

Sometimes a differentiator may be as simple as geography, Edmonds comments. A potential buyer may be looking for a company in a certain part of the country.

“Sellers are being required to document performance. It will still be a big viable market but people can no longer say ‘I have a million in RMR, I want a 50 multiple,’” comments Gronowski. They have to show good growth . . . and that they have [the right] people in place. . .The burden is being put on the seller to prove they’re a good company.” 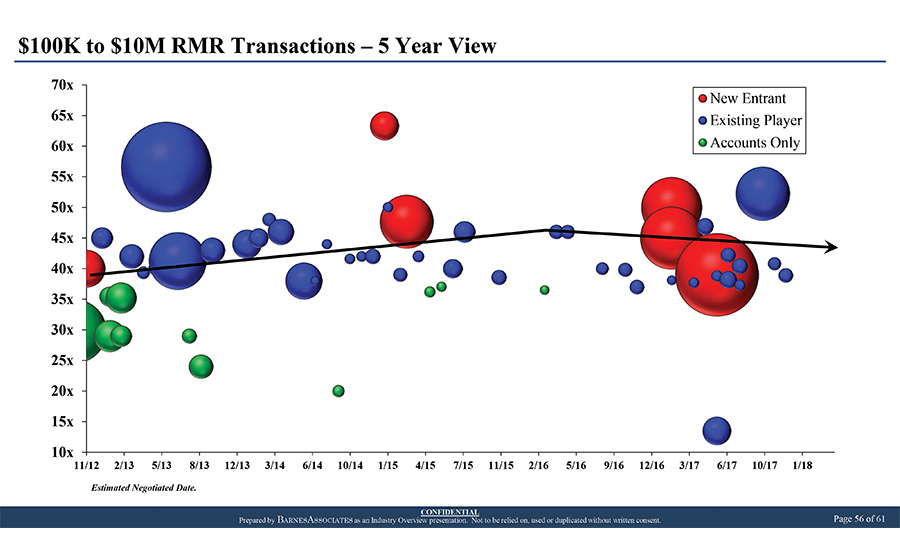 Barnes Associates sees values, typically measured as a multiple of RMR, declining slightly since May 2016 — a phenomenon Gronowski attributes to buyers becoming increasingly sophisticated about the business. (See chart at right.)

Importantly, however, the majority of security acquisitions occur within a multiplier range of 35 to 50, regardless of the economy or other factors, Gronowski notes. That’s another way of saying the security business is steady and largely recession-proof.

Wooster points to another indicator of the industry’s health. Valuations tend to go down when interest rates go up and interest rates have gone up, yet values largely have held up, he says.

Another important measure of the health of an industry is the volume of transactions — and transactions were up a bit in 2016 and 2017, according to Barnes Associates’ data. The number of transactions is influenced by which companies are in the market to buy, Gronowski observes. Currently, he explains, “there are fewer buyers among existing players but somebody else always comes along.”

While certain large dealers are well-known acquirers, Wooster notes that “more small- to medium-size companies are becoming aware that they can be buyers. Historically they have considered themselves on the sidelines but they’re starting to realize that they have access to capital and have the know-how to operationally make an acquisition.”

Meanwhile, buyers are looking at new types of acquisitions. Several experts note increased interest in acquiring dealers that have a strong commercial focus, including companies that typically would be considered systems integrators rather than RMR dealers.

As security systems increasingly are interfaced with other systems, “there is more interest in the people that put all the pieces together, which are the integrators,” says David Stang, founder and president of Stang Capital Advisory LLC, Hinsdale, Ill.

It’s important to note that systems integrators generally are valued, not as a multiple of RMR, but more on earnings, as a traditional business would be. According to Steve Rubin, partner, Davis Mergers & Acquisitions Group Inc. (Graybeards), Long Grove, Ill., systems integrators currently are selling for multiples of adjusted EBITDA (earnings before interest, taxes, depreciation and amortization) in the range of five to seven.

One factor that may have caused security dealer values to dip slightly is concern about new market entrants such as Google, as well as Amazon, which recently purchased Ring, provider of SimpliSafe security systems. Some see companies such as these threatening to disrupt the market.

“Buyers seem to be more circumspect about the industry and have expressed concerns about the competitive environment right now,” comments Will Schmidt, managing director of security lending at St. Louis-based CapitalSource, a division of Pacific Western Bank. “With cable MSOs [multiple systems operators], DIY [do it yourself] and new market entrants and new technology” buyers are asking “how will this impact the traditional security alarm company?”

Schmidt believes this uncertainty is driving some dealers to consider selling their companies.

“Our thesis is that at smaller operators where the principal owner is at or past retirement age, they’re looking at [how] the pace of change has accelerated” and they’re thinking “it’s better to sell now and harvest my gain rather than re-invest in new technologies,” he says. “When you sell to a larger organization, the larger company usually has made the investment and trained the workforce to install and configure more modern equipment.”

What can security dealers looking to sell do to maximize their companies’ value?

Stang sees more dealers doing the same type of due diligence on themselves that a potential buyer would do. This enables the seller to address concerns the seller is likely to have and to quickly produce any data the buyer may request. “A seller never knows the company as well as the day they sell it,” he quips.

Owners thinking of selling should seek a broker’s help well in advance of the date they want to sell, sources advise. How far in advance they advise ranges from at least three months to as much as two years.

Traditionally larger companies have commanded higher multiples than smaller companies, but Gronowski cautions that “size alone doesn’t do it — size and concentration matter but [so do] the underlying operating metrics of the company.”

One important metric is the attrition rate, which shouldn’t exceed the 7 percent to 9 percent range, Rubin says.

Buyers also want to know that “there are people behind the owner,” he observes. Buyers may hold back a percentage of the sale price for a year to help ensure that the owner stays with the business for at least that long. But they also may want to assess the capabilities of other staff members to increase the likelihood that the company will continue to run smoothly even if the owner leaves.

If a seller’s self-assessment, typically conducted with the help of a broker, shows areas of concern, it’s important to address those up front, Edmonds advises.

“Negative information that comes to light late in the process is very disruptive,” he describes. “It could kill the deal or the buyer will say, ‘We didn’t know about this; whatever we said was the price, now it’s different based on this new information.’”

Security dealer valuations may be down slightly and market entrants have introduced an element of uncertainty to the business, but the industry seems to be on a steady course. Dealers wanting to sell can maximize value by planning ahead and understanding the key performance metrics of their business.

Why Use a Broker?

In one important respect, selling a security company is a bit like defending oneself against a lawsuit: You don’t want to do it yourself. The same goes for buying a company, according to sources interviewed for this story.

Brokers we interviewed describe a range of capabilities they can offer clients wanting to sell their companies. They note that they like to spend a lot of time with dealers getting a company ready for sale and advise clients to allow plenty of time for that process.

“You develop a close relationship with your broker. My clients become family to me,” comments Rory Russell of Acquisition & Funding Services.

He advises dealers to work with brokers that focus strictly on the security industry. Such brokers are likely to know many potential buyers and what those buyers look for, enabling them to act as a sort of matchmaker between buyers and sellers.

“We know which buyers to stay away from and which to do business with,” comments Russell. “We know the cultures of the buyer and seller and try to [find] the best fit.”

Brokers are reluctant to reveal details about the advice they provide clients, viewing that advice as something akin to a trade secret. But here are a few examples of the services that brokers can provide to help security dealers during a sale.

Barnes Associates touts the information that it collects anonymously from virtually every security dealer sale. That information provides valuable benchmarks that can help in determining the appropriate valuation for a dealer.

In a similar vein, Davis Mergers & Acquisitions Group Inc. (Graybeards) issues a weekly bulletin which, without using names, provides descriptions of different types of companies that are for sale.

“Any lender who lends on that would want a field auditor to go out and do that,” Stang explains.

Several sources interviewed for this story note that the valuations of two large publicly held security dealers have contributed to a small decline in the values of security dealers over the last year or so.

One of those companies is security dealer giant ADT, which at press time in May had seen its price per share drop from a peak of nearly $13 shortly after the company did an initial public offering in early 2018 to below $8 less than two months later.

The other company is Ascent Capital Group, which acquired Monitronics in 2010. Ascent’s value has trended downward for at least two years, and Monitronics is its primary subsidiary.

The decline in valuation of these companies may reflect concerns about new entrants to the market such as Google and major cable companies, along with increased interest in DIY security systems.

The declines in the average value of security dealers sold over the same time frames have been considerably less steep, however.