Last year was good, but 2018 could be great, say security integrators and security dealers who participated in the 2018 SDM Industry Forecast Study and Panel, a report that SDM has published annually since 1982.

The economy is roaring. The Conference Board announced in late November that consumer confidence had reached a 17-year high. Business confidence also is elevated. Core business spending rose 3 percent to 4 percent in 2017 and the same or better is expected in 2018, declares Kiplinger’s November 22 economic forecast, “Business Investment Slowly Gains Strength.”

The same publisher’s December 4 report, “Tight Inventory Spurs Prices,” says total housing starts will average 1.27 million units in 2018, a 5.6 percent increase from 2017. Single-family starts will climb 8.2 percent — all great news to security dealers like Tommy Smith, president/owner of KMT Systems Inc., Atlanta, which prewired 1,800 homes last year for more than eight different builders. “In Atlanta, the new construction market is back almost as strong as it was pre-2008,” Smith says.

Many measures, but not all, are back to pre-2008 levels. While pre-recession industry growth rates were in the double-digits, since then the industry’s performance has been up and down. However, 2017 yielded a very healthy 8.5 percent increase in the industry’s total annual revenue, which went from $75.6 billion to $82.1 billion. (See related chart on page 44.) This revenue estimate, prepared for the SDM Industry Forecast Study by BNP Market Research, is calculated across SDM’s entire circulation database. It measures revenue from the sale, lease, installation, service and monitoring of security systems, including alarms, access control, video surveillance, life safety, connected-home and related low-voltage systems.

Among just the study’s respondents, 63 percent indicated that they expected total annual revenue to rise in 2017 (the survey was fielded in early-October 2017 so they had to estimate Q4), by an average of 15 percent higher. Among the same group of respondents, 69 percent expect to see their revenue rise in 2018, by an average of 22 percent higher.

OUTLOOK: 2018 Will Be A Solid Year for Security

Dealers and integrators were asked: How do you expect your organization’s 2018 overall revenues will change compared with 2017? 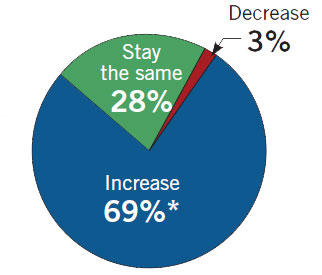 *percentage of dealers and integrators indicating each choice; 73 respondents

Respondents to SDM’s Industry Forecast Study expect 2018 to be a very solid year. Seven of 10 expect their total annual revenues to grow and, among those who foresee expansion, the expected mean increase is 22 percent.

What will drive revenue increases in 2018? According to the study’s results, video surveillance is expected to have the highest sales potential, followed by monitoring. (See related chart on page 48.) The SDM Industry Forecast Study panelists concur with that. “I anticipate our greatest growth is going to be in our camera division, which is primarily monitored cameras; but we also do some high-end, standalone [un-monitored] cameras,” describes Susan Weinstein, vice president, Keyth Technologies, Highland Park, Ill. “We do have recurring attached to those because we also internally monitor the health and the functionality of the cameras.”

In Keyth Technologies’ market, which covers the Chicago metropolitan area, crime is a driving factor that will influence sales, particularly in the city of Chicago, Weinstein says. However, she cites economic conditions as the primary factor driving sales. “With our high-end residential client base, if the economic conditions are strong … they are just really willing to spend and to spend on security,” she notes.

The other panelists cite capital spending by businesses as their top factor to drive 2018 sales. “People are turning loose some money now where they hadn’t been in the last few years for businesses,” says Ray Cherry, vice president of sales at Dallas Security Systems, Dallas, a company that is about 95 percent commercial. 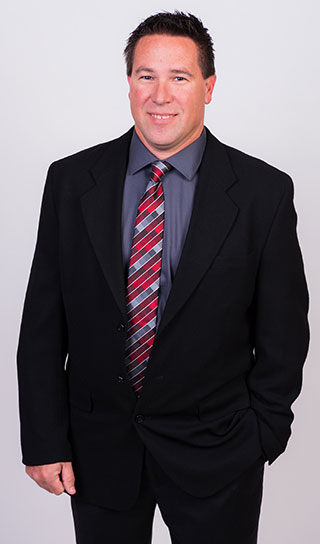 SDM Industry Forecast Study respondents were asked how they expect their level of spending on various types of equipment or services to change in 2018 compared with 2017. More than any other category, video surveillance topped the list of equipment on which security dealers and security integrators will increase their spending this year. Also notable is that 53 percent of respondents anticipate spending more on cloud-based services; this is up 4 percentage points from last year — evidence that sales of these types of services are indeed growing.

RMR will need to be watched this year. While some on the panel generally saw their RMR rise in 2017 from additional smart home products, interactive services, and video network monitoring services, fewer survey respondents increased their RMR in 2017 (72 percent compared with 83 percent last year). However, average RMR among survey respondents was still 28 percent higher. One in 10 survey respondents indicated that generating recurring revenue would be their biggest challenge in 2018.

But the challenge that beat all was finding/retaining employees. Thirty percent of survey respondents selected this as their greatest challenge, up from 18 percent last year, putting it in the No. 1 spot for the first time since 2008. This may reflect the fact that all of the security dealers on the SDM Industry Forecast Study Panel indicated they are in an excellent sales period; further growth could be hindered by a lack of skilled workers. 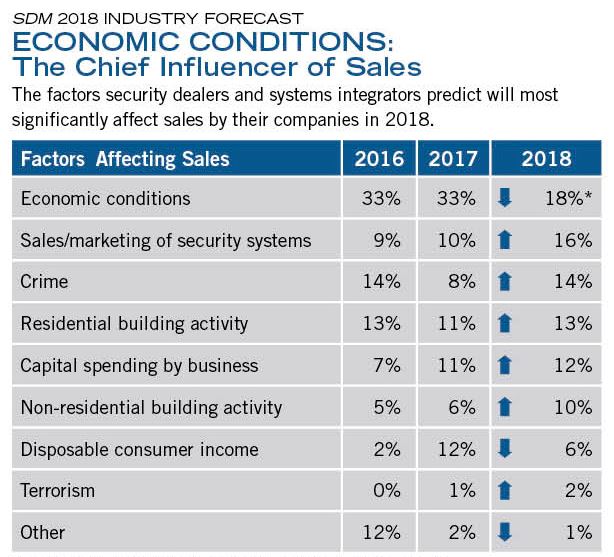 *percentage of dealers and integrators indicating each factor; 103 respondents

For at least the last decade, “economic conditions” has ranked as the top factor dealers and integrators think will significantly affect their sales. The factors in this list could have either a positive or a negative spin on sales. For example, the fact that in the current study, 18 percent of respondents selected economic conditions as their No. 1 factor affecting sales, compared with 33 percent the prior year, means respondents are expressing that as the economy has improved so have their sales.

In theory, many security dealers probably wished they had Steve Sopkin’s current challenge. “If you asked me today, it would be keeping up with customer demand. We’re about six weeks out right now for installations, and it’s tough keeping customers happy. That’s today,” says Sopkin, who is president of Mijac Alarm, Rancho Cucamonga, Calif., located approximately 40 miles east of Los Angeles.

“But I think over the next year there are just so many different options of where the industry is going and I think figuring out how to diversify my business in an intelligent manner without getting too spread out is going to be one of my greatest challenges, which directly relates to generating recurring revenue,” Sopkin says.

As he and the rest of the industry ponder how to position their businesses for 2018 and the coming years, there is reassurance in the fact that the economy is supporting their efforts for the foreseeable future.

*percentage of dealers and integrators rating each technology segment from Poor (1) to Excellent (5); 103 respondents

Dealers and integrators think video surveillance will be the most rewarding segment when it comes to producing sales in 2018. When asked to rate the potential for sales among various technology segments, they gave it an average rating of 3.71 out of 5. Following video surveillance were monitoring and intrusion (burglar) alarm — two segments where many changes also are underway in platforms and processes. 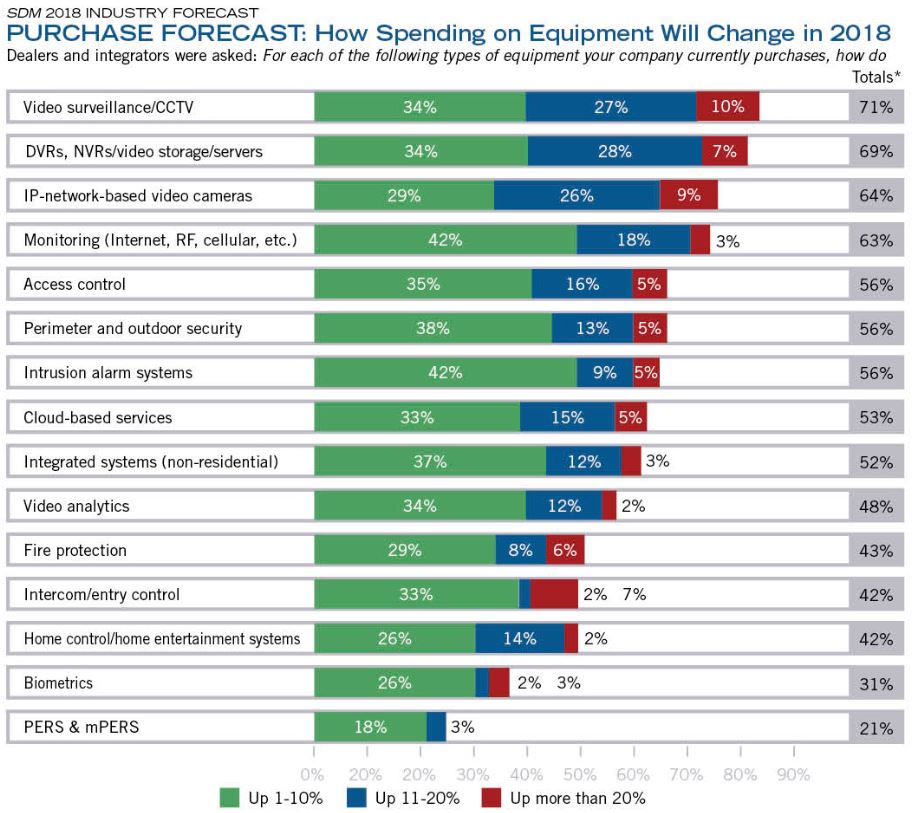 *percentage of dealers and integrators rating their spending in each technology segment from 1 to 7; 103 respondents

Dealers and integrators were asked to rate how their level of spending on equipment will change in 2018 compared with 2017. This table is based on a 7-point scale where 1/2 = down more than 10%; 3=down 1% to 10%; 4 = no change; 5 = up 1% to 10%; 6/7 = up more than 10%. This table shows only the “up” responses. The top five categoris with the most potential for growth in spending are video surveillance/CCTV; DVRs/NVRs/video storage/servers; IP network-based video cameras; monitoring; and access control.