This website requires certain cookies to work and uses other cookies to help you have the best experience. By visiting this website, certain cookies have already been set, which you may delete and block. By closing this message or continuing to use our site, you agree to the use of cookies. Visit our updated privacy and cookie policy to learn more.
Home » SDM 2018 Security Industry Forecast: Moving Into High Gear
ExclusivesSDM TopicsAnnual Industry ForecastIntrusion AlarmSmart HomeVideo Solutions 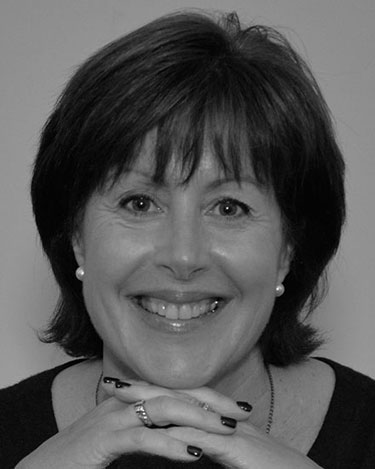 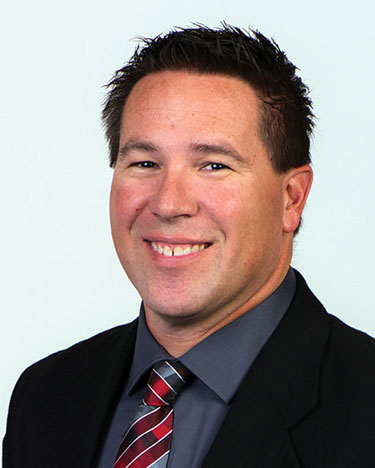 TOMMY SMITH is president/owner of KMT Systems Inc., a company he started 12 years ago. His experience and his passion for audio systems led him to obtain a low-voltage license and CEDIA certification. KMT Systems has become one of the leading companies in the residential new construction market in the Atlanta area. The company also operates a growing commercial business and received the Commercial Installation of the Year Award at Honeywell Connect 2016. 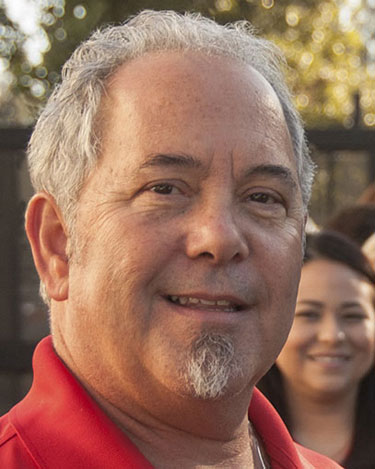 STEVE SOPKIN is president of Mijac Alarm, based in Rancho Cucamonga, Calif., a third-generation family-run company that was founded in 1971. His experience includes becoming a subject matter expert for the state of California, helping to re-write the state’s exam for alarm technicians as well as sitting on the state’s board that reviews alarm company licensees that have been denied or pulled. 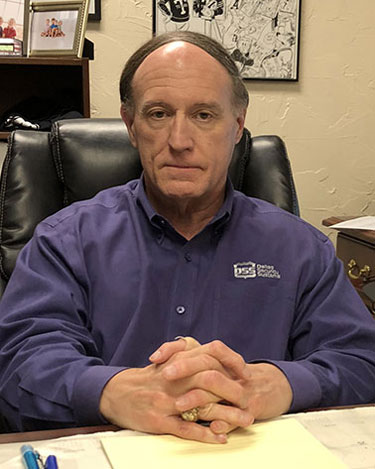 The Panel Weighs In on RMR 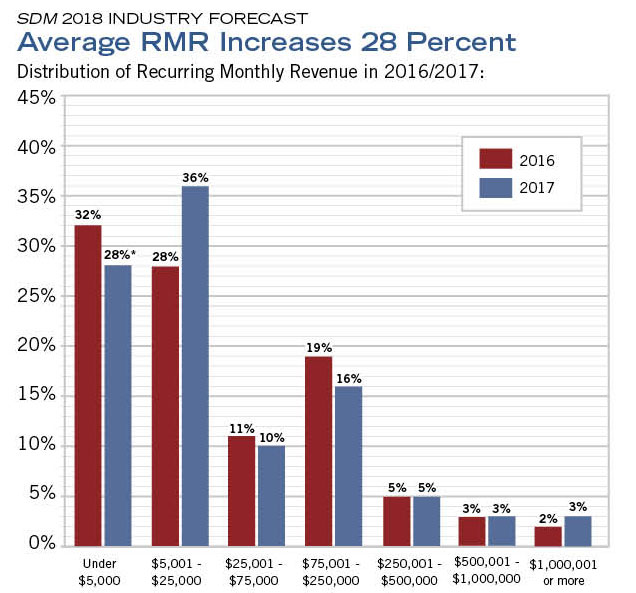 *percentage of dealers and integrators with RMR in each dollar range; 95 respondents

Among companies that generate recurring monthly revenue, 72 percent noted an increase in their RMR in 2017 over 2016. Average 2017 RMR was 28 percent higher than average 2016 RMR reported in the SDM Industry Forecast Study. This table shows the distribution of RMR in various dollar ranges, comparing 2017 with 2016.

SUSAN WEINSTEIN: Our RMR is up about 12 percent this year, primarily because we had a rate increase. We don’t necessarily initiate an annual rate increase. We do it every three or four years, and only in certain categories of RMR. So maybe service plans would have a percentage increase one year, and then we would go maybe a couple years with no increase; and then increase the base monitoring for everybody, then take a little break. We also charge a little bit more monitoring fees for environmental devices such as carbon monoxide detectors, low-temperature sensors, and water detection sensors, so we might increase that a small amount.

So I don’t anticipate 2018 RMR having any major jump other than the increase of our account base just a small percentage, because this year we had our big rate increase.

TOMMY SMITH: This year we had about 35 percent increase in RMR. A lot of that has to do with bringing on some sales staff, adapting some of the product lines to the changing needs. The big factor for us was adding automation services; more and more people are asking for it, and that’s what’s increasing the bottom line.

In 2018, I expect [RMR growth] to be about 15 percent to 18 percent. We brought on an additional sales guy towards the end of the year. We expect with what they’re doing and the packages that we put together, we should see, again, about 15 percent next year.

STEVE SOPKIN: Our RMR has been pretty flat this year. I’m not so worried about it because our net profit has gone up so much. But in 2018 I see us adding an automation platform. And we’re also in negotiation to purchase another local security company with about $15,000 in RMR. So that will give us a boost towards growth.

In our area, we probably get 50 calls a month asking, “Can you beat zero?” Our residential market is kind of flat. So we’re going to add the whole automation platform with lights, locks, thermostats, etc., to see if we can’t gain a little bit more market share that way and serve the customer a little bit better.

RAY CHERRY: Our monitoring — it’s been pretty flat. It was up 3 percent. It’s a very stable base, but there’s not a whole lot of up or down on it. Now, we break out maintenance agreements separate from monitored systems, and maintenance agreements were up 7 percent, so people are catching on to doing that a little better now.

The sales we have are installs from that big increase, and much of them have montoring attached to them, but you know, you lose a few, then you gain. Hopefully you gain more than what you lose.

SDM: Are there more opportunities now in residential than there are for commercial in terms of monitoring unique things and adding on extra services to increase the monthly?

RAY CHERRY: Well, yeah. Everybody calls now about residential and asks about wireless cameras. And the ones we’ve tried, I hate to say — I don’t want to mention any names here.

RAY CHERRY: They don’t work. I’ll tell you what. We put a nice alarm system with cameras in it for a fella that’s a prominent businessman here. We put the cameras in there and they didn’t work. I mean, we made it right — believe me — but, oh my gosh. I hadn’t wanted to look at a wireless camera in a house since, you know?

SUSAN WEINSTEIN: It’s one of the things that we looked at about five years ago, and realized that they don’t work. And therefore, they’re going to cause service drag. Because when they don’t work, my after-hours service technicians are going to need to respond to those calls. And we can’t charge for it, because it doesn’t work. My camera division does a lot of work in the city, in the residential neighborhoods. And we sell high-end, expensive cameras. RAY CHERRY: You all run cable to them, I’m sure, don’t you?

SDM: Are you referring to the wireless technology failing or the quality of the image, or both?

The Panel Weighs In on Total Annual Revenue 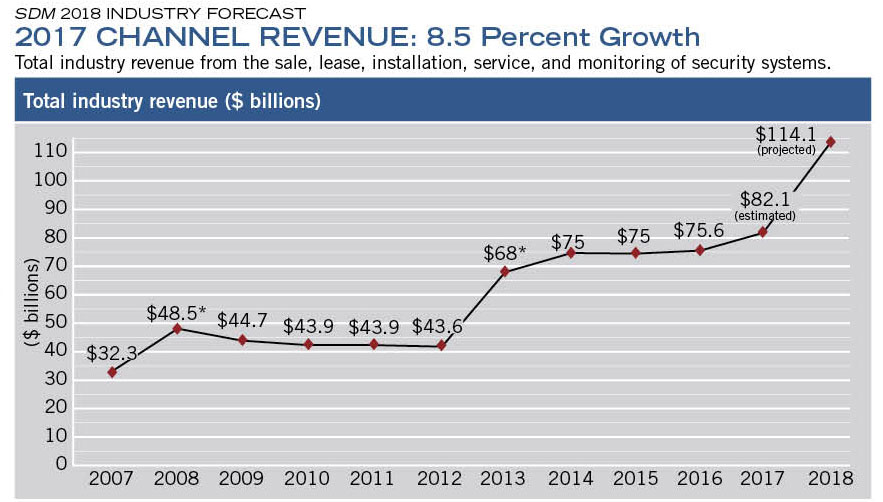 The total size of the security installation channel in 2017 was $82.1 billion, an increase of 8.5 percent from 2016’s measure of $75.6 billion. This estimate is calculated across SDM’s entire circulation database, which is why it doesn’t necessarily reflect other results of the SDM Industry Forecast Study, which is conducted using a random sample methodology.

Susan Weinstein: We’re already up about 6 percent this year over last year, which is great because last year we were up 11 percent over the year before. It was our biggest growth year ever. I anticipate, based on what we have in the pipeline now, and where we were at this time last year, that we will probably be up 5 percent to 6 percent again next year, unless something dramatic occurs.

The type of installations we do are primarily high-end custom residential; we’re only about 20 percent light commercial. Consumer confidence is really, really important in our market — and consumer confidence is up. We find that our customers are really relatively eager to sign a contract and move forward with an installation. Whereas a couple of years ago they spent more time getting competitive quotes or pondering how they wanted to spend their money and where they wanted to put it.

Tommy Smith: We’ve been growing, I would say, beyond measure for the last few years. In 2017 we’re up about 13 percent over 2016. The big part of what makes us kind of unique — I know there are other companies that do it — is we have a very large builder base. Our company is divided into three divisions: new construction residential, residential sales and installation, and commercial.

Commercial is where we’ve really spent a lot of focus. We increased our commercial in 2017 about 25 percent versus 2016; with an overall growth (average among the three divisions) of about 13 percent in 2017.

Steve Sopkin: We expect our best year ever for overall sales growth. Our public works division doing county, city, and school work has done really well this past year. We have probably a 10 percent overall increase in gross sales.

But the interesting thing is that we’ve really only focused on our service division and our expenses. Even though we’ve grown 10 percent in gross sales, we have a net profit gain of probably over 20 percent. So we’re on track. We’re doing really well.

Ray Cherry: We’re probably 95 percent commercial. We still have a nice residential base that has been with us for a long time. As you know, Dallas is where a bunch of the free installs started, and it’s never stopped here. So residential is kind of tough here, you know?

Our fiscal year ends in June. But as far as a calendar year comparing our outright sales, they’re way up. Outright sales are up 26 percent this year over 2016. I think for a lot of businesses there’s more capital spending going on, and the economic conditions are good here, too. It’s just been a great year.

I don’t see it slowing down, really. The phone will probably stop ringing here in the next few days for the holidays. But the guys are putting out nice, big bids right now that we should have a real good shot at getting. I think as long as the economy holds up it’ll be another good one in 2018.

SDM 2016 Industry Forecast: Is the Security Space Too Congested?